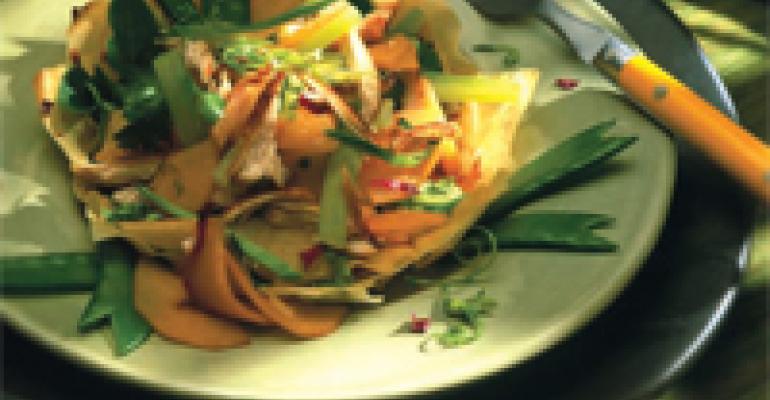 Savory chicken and sweet fruit&#8212;a classic combination in many cuisines around the world&#8212;gives you the chance to add flavorful variety and signature presentation opportunities.

As an ever-popular and profitable menu mainstay, chicken nevertheless presents a persistent challenge. What to do to make it new, exciting and different? An easy, healthful, and exceedingly flavorful answer is: add fruit! Many operators who feature signature chickenand- fruit dishes on their menus (whether entrees, salads or sandwiches) rank them among their customers’ top favorites.

At Adele’s, a year-old restaurant on the University of Maryland campus in College Park, if customers enter with the idea that they don’t like meat and fruit together, chances are they’ll exit with a new-found appreciation for the combination. That's because Executive Chef Muriel Homesack is a big proponent of mixing sweet and savory. She recalls: “When I first created the menu for Adele’s, the staff asked, ‘Gee, Muriel, does everything have to have fruit in it?’ I’d put fruit in chicken, beef and pork dishes; and they all soon discovered how good it is.”

Proclaiming that she never does anything “conventional, traditional or classical,” Homesack notes one of the restaurant’s most popular items is Chicken con Banana, an inventive entree that pairs spicy jerk chicken with crisp-edged banana slices in a caramel-like sauce. “Our kitchen and wait staff, 95 percent of whom are students, were really hesitant about that one,” she admits. “But those ‘ewwws’ turned into ‘ohhhs’ once they tasted it. They recommended it to other students, and now customers can't get enough of it. Sales have gone up 30 percent.”

Some of Homesack’s other signature combinations include chicken and dumplings with dried cherries, a Key West chicken sandwich with mango relish, chicken salad with strawberries and poppyseed dressing, a warm sandwich of brie, apples and grilled chicken, and a chicken nugget dipping sauce made with pineapple, horseradish and mustard. “You just can’t go wrong putting together chicken and fruit,” she declares. “The texture and flavor blend is fantastic.”

Although it's been on the menu for over a decade, the “Hawaiian Chicken” at St. Joseph’s Hospital in Marshfield, WI, still holds a firm spot among the top ten items in the operation's entire repertoire. According to Assistant Director of Foodservice Jennifer Lurvey, the kitchen runs out every time it's on the menu. Baked with pineapple slices, onions and green bell peppers, the chicken breasts absorb the sweet and sour flavor that customers apparently crave. “When we serve Hawaiian Chicken, we know we need to make 500 servings a day (for a customer base of 2,500), compared to 300 to 350 servings of other popular dishes,” she explains.

Ironically, it’s the dish’s very popularity that has the production staff wishing to drop it from the menu. “They have to make so much of it to accommodate the demand that it can be challenging,” Lurvey says. The solution has been to slot the dish into the hospital’s new seasonal cycle, so that it’s now made every three weeks just during the summer months. Additionally, it’s been removed from the patient menu and is never simultaneously on the menu for all three other production areas (two cafeterias and a home delivery program). But customers still ask for it “out of season”; when they can’t get it, they request the recipe to make it at home.

At the Pennsylvania College of Technology in Williamsport, a new chicken salad with grapes and pecans has been a big seller since it debuted during the summer program last year. “We have several different units on campus, and many customers will choose where they eat lunch based on who may be serving the chicken salad that day,” says Marketing Assistant Amy Lingg. “It was originally just going to be something offered last summer, but it started gaining momentum among the faculty throughout those months. Then when we went back to plain chicken salad after school began in the fall, there was a lot of disappointment. So we had to put it back on the menu. Now, the students really enjoy it as well, so it appears on the menu somewhere on campus every day.”

Pairing fruit with chicken is one “secret” technique Kathleen Conard has come up with to satisfy customers searching for healthful meal choices at Guidant Corp. in Temecula, CA. As general manager of Take a Break Services Co., the site’s foodservice provider, Conard has concocted several upscale fruit-and-chicken dishes to appeal to the health-minded yet flavor-crazed.

Among the most popular are Jamaican Jerk Chicken and Tropical Fruit Caesar Salad, Orange Sesame Cashew Chicken Salad with Pan-Roasted Mixed Squash and Green Onions, and Mu Shu Chicken Wrap with Five-Spice Fruit. (The key, she says, is to use the juice from maraschino cherries and mix in Chinese five-spice powder with whatever fruit is in season.) Elly Gruber, foodservice director at San Mateo County Health Center in Northern CA also views chicken and fruit unions as a boon to low fat meal preparation. “Fruit allows you to add a punch of flavor while still providing low fat, low sodium options,” she notes. A sauce of raspberry jam, garlic and Dijon mustard served over pounded chicken breasts is a catering item that never fails to elicit raves. “It looks just like a regular gravy, but it’s got a sweet and sour flavor that gives it a surprise bursting sensation in the mouth,” she explains.

Elly Gruber, foodservice director at San Mateo County Health Center in Northern CA also views chicken and fruit unions as a boon to low fat meal preparation. “Fruit allows you to add a punch of flavor while still providing low fat, low sodium options,” she notes. A sauce of raspberry jam, garlic and Dijon mustard served over pounded chicken breasts is a catering item that never fails to elicit raves. “It looks just like a regular gravy, but it’s got a sweet and sour flavor that gives it a surprise bursting sensation in the mouth,” she explains.

Another creation recently introduced at Gruber’s cafeteria is Grilled Chicken and Apricots with Honey Lime Vinaigrette. It has received “a very good reaction,” she states. “Some customers really love it, although there are some who hate the idea of fruit and meat together.”

Such preconceived notions and mindsets are the one hurdle operators may face in trying to menu new fruit and fowl creations. So taste testing or offering samples may be necessary to overcome the reluctance. “It’s been my experience that once people try the two together, they go crazy for it,” notes Gruber. “Fruit and chicken together have a uniqueness; it’s something different.” And after all, if “Chicken con Banana” can become a top draw among such tough-sell customers as college students, then what fruit and chicken combo couldn’t?