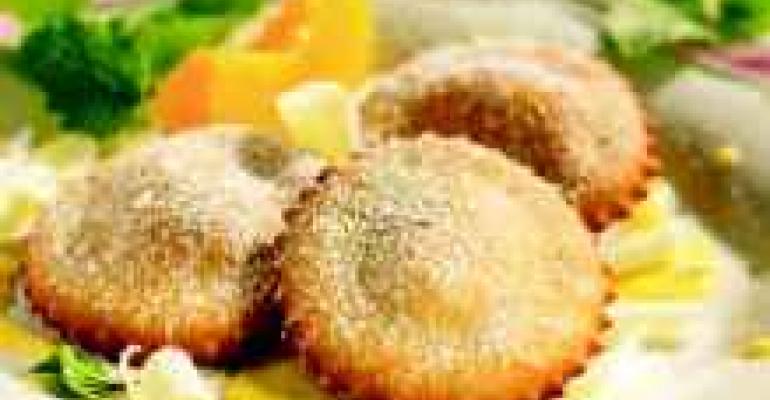 Blast from the past
At Wellmont Holston Valley Medical Center in Kingsport, TN, Chef Armand Celentano menus both purchased and homemade fruit cobblers, pies, turnovers, crisps, trifles, strudels, dump cakes and "fools." And his customers love them all.

And when, after careful research and experimentation, he recently debuted "Old Timey Tennessee Blackberry Dumplin's", the cafeteria exploded in nostalgic euphoria, with customers delightedly exclaiming, "my grandmother used to make that!"

It was just the reaction Celentano aimed for. "The dumplings are one of the culinary traditions from this area that are slipping through people's fingers—they don't have time to make things like that anymore," he explains. "But people around here grew up with fruits for dessert, and the dumplings allow them to touch base with their past."

With about 15 different dessert choices available daily, including one hot fruit specialty, Celentano not only targets the comfort-food seekers with plenty of old-fashioned traditions, but also makes sure to attract those looking for hipper or more upscale fare. For such customers, strawberries with melted ganache for dipping, or fruit pizza, made with a cookie dough crust, sweetened cream cheese and sliced fruit, fit the bill.

Light is as light does
"Fruit desserts are important to have on the menu for the perception of something light whether they actually are or not," notes Victor Parise, executive chef for CulinArt at the Cadwalader, Wickersham & Taft law firm in New York City.

Popular examples include his Poached Pears with Zabaglione, a sophisticated dessert pairing the light appeal of vanilla-infused poached pears with the creamy decadence of zabaglione; baked apples with raspberry sauce; and soufflè-style bread pudding with blackberries, topped with a dusting of powdered sugar.

To bring a little extra drama into the cafè, Parise will occasionally stage chef demonstrations of flambè desserts, such as bananas Foster and cherries jubilee.

At the five-site WellStar Health System in Atlanta, Executive Chef Jennifer Salmon declares that "low-calorie desserts aren't big sellers here. People will do low-cal in other menu areas, but in desserts, if they are going to have it, they want the full Monty."

Salmon delivers just that with time-honored banana pudding ("our most popular dessert by far") that's sold once a week for 25 cents an ounce on the salad bar.

"Our dessert and salad person was on medical leave several months ago, and the first week we didn't have the staff to make the pudding, it was a near riot," she recalls.

Salmon's customers also enjoy such concluding comforts as homemade apple and peach cobblers (usually made with canned or frozen fruit); purchased blackberry and cherry cobblers ("to get a more consistent flavor profile in the fruit"); and an occasional twist on the banana pudding theme, done cheesecake-style.

But at Bowling Green State University in Ohio, Assistant General Manager Linda Duda reports a different attitude. "A segment of today's students are looking for healthy options," she says, noting that "the most popular fruit-based desserts sold in Kreischer Sundial (a residential dining hall cafe) are the yogurt parfaits." In fact, Duda reports, the parfaits "outsell layer cakes and even some bar cookies."

Crimson Catering customers at Harvard frequently request yogurt parfaits too, according to Director of Catering Madeline Meehan, but the fresh berry trifle ranks right up there, as well. "Dessert choices are easily influenced by trends," she maintains, "with fruit-based desserts gaining in popularity as customers try to avoid fats and carbs. However, you can't just throw a fruit salad on the menu as a gesture. The desserts need to be satisfying, prepared using the highest quality ingredients, and presented attractively."

Meehan does that by composing the parfait with fresh berries and homemade granola; the trifle elements—fresh berries, pastry cream, genoise—get layered in a martini glass and finished off with a fruit or mint garnish.

To view the recipes published with this article, click here: fruitful endings recipes