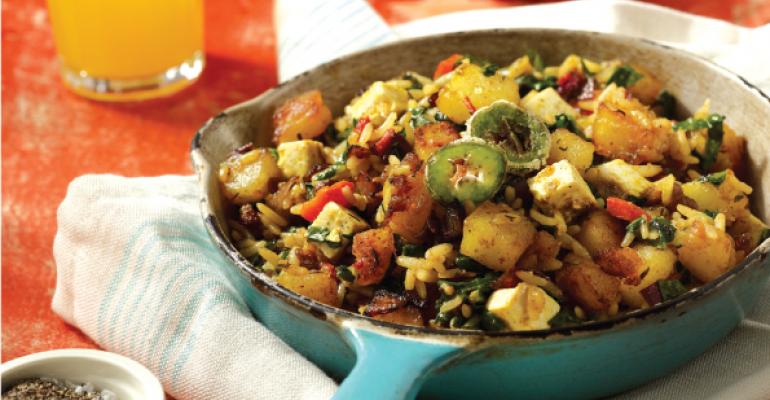 Hot and spicy condiments and add-ons that pack some heat are attracting more attention than ever.

There are currently many food trends that are described as “hot,” but few are as fiery as hot sauce. Sriracha is going mainstream, and there are many other global ingredients that crank up the heat as well. With more diners seeking authentic, bold flavors, onsite chefs are making use of ingredients from all over the planet to pack some heat.

Waldy Malouf, senior director of special projects, The Culinary Institute of America (CIA), says our increasingly global food culture is the reason for the spike in demand for bolder flavors, especially among millennial diners.

“The world shrinks through technology and the taste of the nation has changed,” Malouf says. “There’s a desire for and an interest in bolder food.”

People seek food that “talks to them,” says Malouf adding it can be food that speaks of a particular culture, whether it’s Southeast Asia, the Deep South or Buffalo, N.Y.

“The food of previous generations in this country was European-based or American farm food,” he adds. “It just wasn’t as exciting. Now, people are seeking authenticity and they don’t want it watered down to make it ‘more palatable’ for them.”

Malouf has been working on a collaboration with Compass Group subsidiary Restaurant Associates at the CIA’s Hyde Park campus, which will include a new dining commons where culinary students will eat and learn. Menus are being developed for The Egg, the main area of the commons, that will feature several concepts. Foods with bold, spicy flavors are a defining feature of new menus.

“Our students range in age from 18 to 30 for the most part,” Malouf says. “So we need to provide the authenticity and the excitement they are looking for.” That includes items with some heat.

“The Rooster” Goes Mainstream
In the last couple of years, Sriracha, aka rooster sauce, has gone from an ethnic condiment nobody had really heard of to the go-to hot sauce for millennials. Major manufacturers have recently rushed to create their own versions, and chefs are adding the sweet fiery red chili/garlic sauce to everything from mayonnaise to chocolate brownies.

Sriracha is more than ready to hit the mainstream, according to international business intelligence firm IBISWorld’s report, “Serving Up Diversity: Major Trends in the Foodservice Sector.”

Sriracha As a Starting Point

Rooster sauce is definitely a favorite for students at Wyoming Seminary, a private prep school in Pennsylvania’s Wyoming Valley.

“We offer Sriracha on the salad bar and it’s something just about everyone likes,” says Paul McMillan, Metz Culinary Management general manager and executive chef at Wyoming Seminary. “And Sriracha aioli is a great way to dress up a ‘plain Jane’ chicken sandwich.”

McMillan has even been trying a new trick with Sriracha that turns it into a versatile topping.

“Spread Sriracha over wax paper on a sheet pan and dry it in the oven at 180 degrees for at least an hour,” he says. “Take it out, let it cool, then break it up into crunchy crumbles that you can sprinkle on top of soups, salads or baked potatoes.”

One Hot Menu
A new meatball concept at the Wyoming Seminary called M-M-Meatballs features a few different spicy meatballs, including one version inspired by the spicy all-American snack superstar, Buffalo wings. The Buffalo Chicken-Bleu Cheese Meatballs don’t use Sriracha, relying instead on more traditional hot sauce for their tangy kick.

Pasta is offered alongside the meatballs at the concept, and even the pasta turns up the heat in the form of a spicy Alfredo sauce option.

Still not enough heat for ya? Extra add-ons in the serve-yourself area include crushed red pepper and giardiniera, an intensely vinegary Italian condiment that’s a mix of vegetables, usually including cauliflower and carrots.

Using Sriracha as a starting point, McMillan has been using other spicy condiments as an easy way to fire up popular dishes like Shrimp Pad Thai.