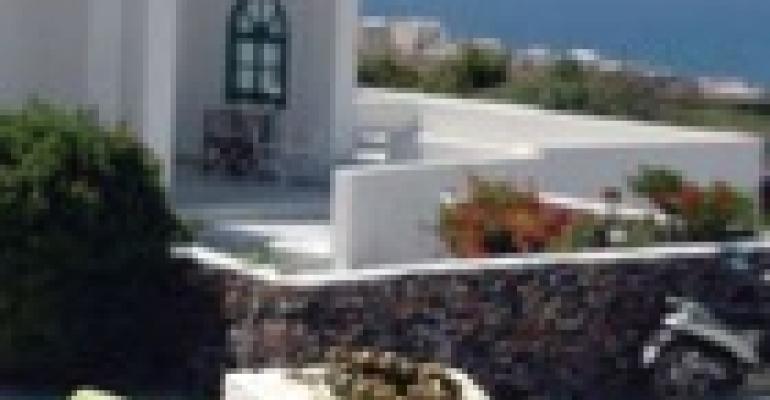 Greece: Gem of the Mediterranean

"In ancient Greece, a professional cook was regarded as an artist. When these cooks created new dishes, they were honored at ceremonies and given titles as rewards as well as gifts of gold and land. And Terion, an Athenian baker, was even mentioned in the writing of Plato and Aristophanes." – Peter Conistis, cookbook author and chef, Greek Cuisine, The New Classics, Ten Speed Press.

Greek: Classic Dishes for Modern Palates
In ancient Greece the agoras—markets—nourished some of history's greatest thinkers, such as Socrates, Plato, and Aristotle. The country's culinary tradition is just as long as its history and much of the food that is eaten today probably doesn't differ much from that enjoyed by the famous and not so famous Greeks and their families.

It is typical of Mediterranean cuisine—local, simple, colorful and packed with robust flavors. The Greek diet is based on vegetables and salads, grilled fish and seafood, fruit and yogurt, all flavored with olive oil, lemons, wine and fragrant herbs. The hilly terrain in not good for grazing cattle and for this reason beef is expensive and reserved for festive occasions or used in small amounts. Sheep, goat and lamb take best to the grassy hillsides and therefore provide the most popular proteins utilized. Chickens here are usually free-range and corn-fed, resulting in an excellent flavor.

There are four main cooking traditions of the country: shepherd's cuisine (portable, dairy-dependent creations such as savory pies); the fare of the arid islands (simple dishes born of scarcity, based on grains, grapes, and olives); the Byzantine-based cooking of Thrace (influenced by Muslim, Slavic and Gypsy cuisine and the area's most abundant produce growing region), and Macedonia in the central north (influenced by Persian, Turkish, and French cuisines).

Aglaia Kremezi, the noted Athens-based authority and cookbook author on Greek cooking (see cookbook section pg. 98), believes that Greek cuisine has been lumped into the general Mediterranean category with little emphasis on its distinct character. She also feels that it has not been truly discovered in America.

"It is simple, straightforward cooking based on fresh ingredients which are readily available to the American kitchen," Kremezi says. "Seasonal vegetables, leafy greens, grains, olives, olive oil, beans, local cheeses, fish (fresh and cured), occasionally meat, and fresh herbs and seasonings like fennel, dill, thyme, and garlic are the ingredients for everyday cooking on the Greek isles."

Simple, Rustic Fare
When developing the menu at his restaurant Molyvos, Chef Jim Botsacos consulted with Kremezi. Botsacos has been chef at the three-star Molvyos since it opened in New York in 1997. He has set the standard for newer Greek restaurants as most of his recipes are for fairly simple, rustic fare, made with the best local ingredients.

One of his signature touches is his lighter rendition of the classically heavy bechamel sauce used in some of the most famous dishes of Greece: moussaka and pastitsio. Botsacos lightens the sauce with premium whole-milk yogurt, with a 60/40 bechamel to yogurt mix, allowing the other flavors of the dishes to shine through—delicately cinnamon-scented lamb or earthy eggplant, for instance.

A few choices on his lunch menu include a sliced, roasted leg of lamb wrapped in flat bread with yogurt garlic sauce, romaine and marinated onions. And, for a lighter yet upscale dish, sashimi grade bigeye tuna is served with micro greens, cucumbers, scallions and grapefruit, and the pan roasted boneless free-range chicken is nestled with baby greens, frisee, wild mushrooms, roasted garlic, toasted almonds and Manouri cheese.

An open oak rotisserie is the hallmark of Anthos Greek Food & Fun, also in New York. According to Chef Michael Psilakis, Greek food is as regional as Italian. He is gaining kudos for his culinary interpretations and "stands at the forefront of the Greek cuisine breakthrough, helping Greek food go beyond the diner standards and take its rightful place among the respected regional cuisines of other nations," according to New York Restaurant Insider, April 2007.

Another up-and-coming chef, Jose Picazo, meshes his native Spanish ingredients with Greek influences at Kyma, opened in 2006 in Annapolis, MD.

Cooking Greek
From the history of Greece to it's classical dishes and current renditions, check out these cookbooks as a starting point to Greek cookery.

The Glorious Foods of Greece: Traditional Recipes from the Islands, Cities, and Villages, by Diane Kochilas, 2001, HarperCollins Publishers, $40.

The Foods of the Greek Islands: Cooking and Culture at the Crossroads of the Mediterranean, by Aglaia Kremezi, Jim Botsacos, Aglaia Kremezi (Photographer), 2000, Houghton Mifflin Company, $40.

Greek Islands
Stretching from the shores of Turkey to the Ionian Sea east of Italy, the Greek islands have been the crossroads of the Mediterranean since the time of Homer. Offer a specialty from each group of islands:
Cyclades Islands: grilled red mullet, tomato anything, lentil soup, grape-must (syrup) cookies, pastries and candy.

Greek Holidays
Greek Orthodox Christmas is an observance of faith and comes at the end of a 40-day fasting period which limits foods eaten to those made from ingredients that do not contain blood, and sometimes, dairy products, olive oil, and wine as well. As a celebration of the birth of Christ, some foods have religious significance, and some are culinary celebrations at the end of the fast. Greek Orthodox Easter is the most significant observance in the Greek Orthodox faith, and is preceded by a seven-week period of Lent. Foods and customs are based on tradition and have changed little over time. One is a popular game called tsougrisma. It involves two players and red eggs with the goal of cracking your opponent's egg. The player who successfully cracks the eggs of the other players is declared the winner and, it is said, will have good luck during the year.

Name Days
Pick a name-any name–and celebrate! Name days are a much-anticipated event each year, greatly overshadowing birthdays. Most children born into Greek Orthodox families will be given a name that coincides with the name of an officially Greek Orthodox saint. The name day is celebrated on the saint's day, and is a cause for birthday-like celebrations including sweets, gifts, and parties. Name days are one of the few occasions when Greeks offer food (sweets) as gifts.

Many believe that the so-called "Mediterranean diet" is the healthiest in the world. Here is one source operators can use to investigate recipes that make up that diet.

Eating the Greek Way: More than 100 Fresh and Delicious Recipes from Some of the healthiest People in the World, by Fedon Alexander Lindberg, June 2007, Crown Publishing Group, $25.

A specialist in endocrine disorders, Lindberg was born and raised in Greece and advocates a "slow-carb" approach to eating. He describes "eating the Greek way" as balancing "slow" (or "good") carbohydrates, protein, and healthy fats to keep insulin levels relatively consistent. Each recipe includes its glycemic index, a ranking based on its effects on blood sugar.