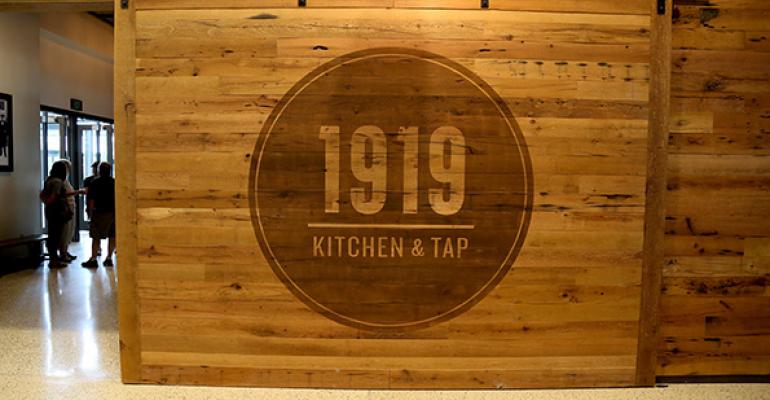 “The idea of a gastropub really drew me in because that’s typically what I would want to do in my spare time,” says Drew Hall, 1919’s executive chef, who comes from a fine-dining background. “My biggest challenge has been coming up with the right menu for the people who live here. We are always going to have new guests trying us out for the first time from all over. “

The new restaurant offers a menu that highlights locally sourced ingredients, including cheese curds breaded with Parmesan and eggs deviled with Wisconsin cheddar, prepared in an open kitchen. Guests can also select from a bar offering that includes 40 varieties of beer, many brewed in Wisconsin.

“We really wanted our menu to speak to the local community, the people who will be coming in regularly to dine, about their traditions,” Hall says.

“I am not a Green Bay native, and I’ve only lived here a short time,” Hall adds. “With the help of my colleagues who really know Green Bay, I was able to get the constructive criticism I needed to make a menu that suited our audience, while still trying new culinary ideas.”

Menu items include beer cheese bisque with brioche crouton and crème fraiche for $6, Mason jar pear salad with spinach, golden beets, dried cherries, feta, pine nuts and a balsamic vinaigrette for $9, steak and frites for $21, and wide range of burgers from $9 to $14 and flatbreads from $9 to $11.

The restaurant seats about 250 inside on the first floor of the Lambeau Field Atrium, as well as 100 on the restaurant’s outdoor patio. The restaurant replaced Curly’s Pub, which had operated on the Atrium’s second floor since 2003.

“It’s Lambeau Field, man,” Hall says. “I’ve never seen anything like it. It is truly a landmark attraction. The fans love this place and they love coming here, not just for games.”

Given the ardent Packers fan base and many visitors to Lambeau Field, not just on game days, the restaurant has some challenges. The stadium’s capacity is about 80,750, making it the third largest in the NFL behind FedEx Field (Washington Redskins) in Landover, Md., at 85,000 and MetLife Stadium (New York Giants and Jets) in East Rutherford, N.J., at 82,566.

“I think our volume will be our biggest hurdle,” Hall says. “We’ve been going full speed since opening day and people are still coming. It’s great. With that level of business, it takes a big team to get the job done. We look forward to the challenge and can’t wait for game one.”

The first home-field preseason game is Aug. 29 against Philadelphia and the first regular-season home game is Sept. 20 against Seattle.