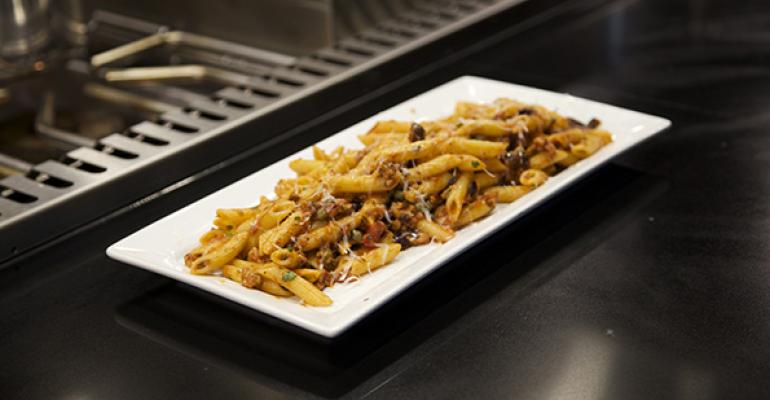 <p>TRASH TO TREASURE: At the University of Missouri, students sampled carp, a &quot;trash fish&quot; or &quot;nuisance fish&quot; that&#39;s clogging rivers and streams and heading for the Great Lakes. In this application, the fish is used in place of anchovies with Pasta Puttanesca.</p>
Menu Trends

Invasive Carp Could be on the Menu at Mizzou

Can&rsquo;t beat &lsquo;em? Eat &lsquo;em! Making &ldquo;nuisance fish&rdquo; like carp into delicious menu items raises awareness and could be a solution to a big ecological problem.

Asian Silver Carp are a huge problem, clogging rivers and streams in the Midwest, and making their way up to the Great Lakes. At the University of Missouri, in Columbia, a professor and a chef are working on a culinary solution to this problem.

“The carp originated in China and we brought them over (on purpose) in the early 1970s for water purification. They eat phytoplankton in waste water and ponds,” says Mark Morgan, an MU associate professor of human dimensions of natural resource management. “Flooding caused them to escape captivity and they got into the Mississippi River. They have been ‘marching’ upstream ever since.”

This means carp can overtake river systems, posing a serious risk to boaters when they jump aboard (they can easily weigh 20 to 25 pounds), according to Morgan. Carp are threatening the Great Lakes and could disrupt the multibillion-dollar fishing industry.

Earlier this year, Morgan introduced carp to Executive Chef Eric Cartwright, who started thinking of ways the invasive species could become part of the menu.

“I said, let’s get some of this product and play around with it,” Cartwright recalls.

Recently, Cartwright offered a taste test to a small group of students at the new Sabai Culinary Development Kitchen in Johnston Hall.

Unlike other fin fish, carp doesn’t easily hold together. The texture is more like ground beef, making it a challenge to work with.

“Carp has multiple Y-shaped bones, so it’s hard to process it into filets,” Cartwright says. When the fish is processed, it’s pressed through a mesh screen, leaving the bones behind and resulting in flaky, basically ground fish. “It’s a cool challenge; it’s not a product that’s common in our regular protein repertoire.”

Cartwright decided to use the fish in several dishes “that would make sense,” he says. First, he tried a fish burger, but even after adding binding agents like eggs and breadcrumbs, the carp was so crumbly, it fell apart too easily.

The next idea was an Italian fish stew that began with onion, celery and bell pepper. Garlic, thyme, oregano, white wine and fish stock added more flavor, and it all was simmered with some crushed tomatoes. The carp was added at the end, and the student taste testers really liked it, Cartwright says. The dish also incorporated dogfish, another underutilized species, cut into a half-inch dice to give the stew more dimension. (MU works with Sea2Table, a company dedicated to connecting foodservice with fishermen. The carp didn’t come from Sea2Table, but it does provide dogfish, redfish and more.)

“This is the [application] people liked the best,” Cartwright says. The carp took the place of traditional anchovies, and its mildly fishy flavor stood up well alongside garlic, tomatoes, chopped olives and capers. Served over pasta with fresh parsley and grated Parmesan, this dish was a winner, and easy to make as well.

Students also tried carp in corn chowder with bacon and jalapeño, which was also well received.

And the event wasn’t just about the fish as a food. While some of the students already knew about the environmental impact of the “nuisance fish” others were just learning about it that day.

“I think the name ‘carp’ may make some people go, ‘ugh,’ but now at higher end restaurants, we’re starting to see ‘trash fish’ be in vogue, so I think that will help,” Cartwright says.

The potential isn’t just at high-end restaurants or special events. Cartwright is thinking of incorporating carp, which is “so economical” (it retails for $1.99 per pound) into other dishes around campus, like fish tacos and a Southeast Asian street-food snack that’s a crispy fish cake with lemon grass, kefir lime and a sweet chili sauce.

The test kitchen is a great way to get immediate feedback from students, Cartwright says, and it’s still evolving, with lots of possibilities for the future.

“Sometimes when you pass out samples, someone with a tray will pass them out at a busy location,” he says. “Maybe 100 people grab a sample, run off and then you never really get the feedback. This way I get a better idea of students’ initial thoughts and reactions.”

So can eating carp really help solve this ecological problem?

“Every movement has to start somewhere,” Morgan says. “The more people who eat carp, the fewer fish we will have. Right now, we can’t put a serious dent in the population by eating them, but that could change. I always say, ‘Carp are a healthy and delicious solution to an environmental problem, and we can accomplish this one forkful at a time.’”