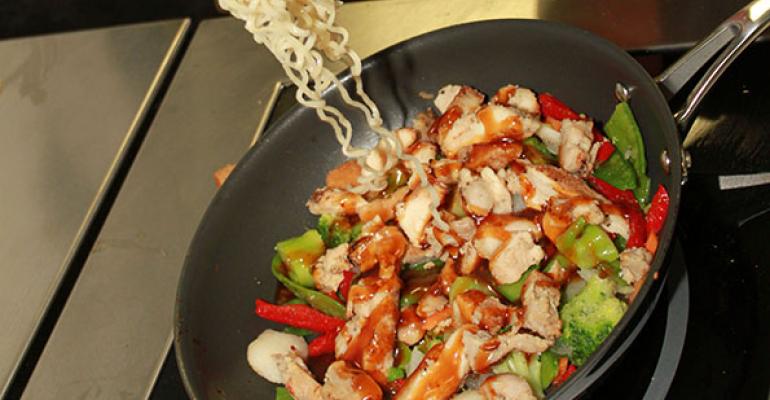 Asian-inspired options like sushi and a noodle bar give students trendy, healthy and fun food that meets USDA requirements.

Sushi being served in schools is not entirely unheard of, but the fact it’s being done in Liberty Township, OH, a suburb outside Cincinnati, and not in Seattle or Miami, makes it a little more interesting. And Lakota Local School District Director of Child Nutrition and Wellness Chris Burkhardt says he actually stole the idea from nearby Sycamore Schools and had even tried it four years before.

Times, and tastes, have certainly changed. At Lakota’s two high schools (grades 10-12) and two freshman campuses (just ninth grade), sushi is offered one day a week and a noodle bar is featured at all secondary schools (grades 7-12) in the district on another day. The Asian-inspired meals have been quite successful so far, Burkhardt says, and they highlight several other trends emerging in the school segment.

Lakota first tested the sushi offering last year through a partnership with Fusian, a Cincinnati-based restaurant chain, and has made it a weekly feature this year. Burkhardt says more than 200 rolls are sold daily in total as a la carte items, that meet the new Smart Snack requirements of the Healthy, Hunger-Free Kids Act.

The price to students ($7) isn’t cheap, especially compared to the other options Lakota offers that are below $4, but the 10-piece roll “provides a hearty meal,” says Burkhardt, who connected with Fusian after hearing about the neighboring district’s success. The restaurant supplies the rolls (premade and transported in coolers) and labor. The venture has been profitable for the district, despite a 50 cent price increase per order this year because the restaurant had to use brown rice to meet the new whole-grain rich requirement required in schools.

Burkhardt says the restaurant typically offers the same four to five options each week (none raw)—a California roll, shrimp, crab and chicken for those less adventurous eaters—and it prepares a set amount based on the previous week’s business and preorders.

“We don’t mind selling out. We want that buzz if we don’t have availability,” says Burkhardt, adding the restaurant takes back any unsold rolls and doesn’t charge the school.

Burhkardt says he tried something similar four years earlier, but without a reliable source for sushi, he went with a frozen product that lagged in quality.

The noodle bar is not done through outsourcing and in fact at one of the schools, Burkhardt is experimenting with an induction cooker.

“We’ve typically been a heat and serve district,” he says, “but are getting into more speed scratch now. I’m not sure we can get to cooking completely from scratch because of labor, but this is more like an upscale quick-serve restaurant.”

Lakota offers grab-and-go sandwiches, burgers and salads, but also gives students the option to customize burritos, sandwiches, specialty pizzas and rice bowls (the “Chipotlization of school meals,” Burkhardt says). The noodle bar is a prime example, even at the schools without the induction cooker, which use preheated ingredients positioned nearby in mixing bowls to allow for customization.

A meal from the noodle bar sells for $3.85, meets all USDA guidelines and can also be served with fruit and/or a milk. Students can customize the noodle bowls with more than the required half cup of vegetables, two servings of pasta and two ounces of protein, though, and then choose from up to eight sauces or a dry spice bar. Burkhardt has tried whole-grain rich noodles but hasn’t found a suitable option, so thanks to a waiver from the USDA this year, he’s still using traditional enriched pasta.

Since the dish is made mostly of vegetables and commodity proteins, it doesn’t come with any additional costs beyond the labor of one employee manning the station.

“It’s going to be a lot hotter, more customizable and done right in front of the students,” Burkhardt says of the noodle bar, especially at the location with the induction cooker. “It does take a lot more time—30 to 45 seconds per student—but at the same time, we’re teaching our students and staff that it is OK to wait in line for quality.”

Burkhardt says he came to that conclusion flying back from SNA’s annual conference in Boston earlier this year when he watched a line of 50 people wait for Chipotle while all the other outlets in the airport food court had only a few customers.

He says if they have 25 students in line at the sushi bar, for example, the last person would have at least 16 minutes (of the 30-minute period) to eat their lunch. The rolls are being customized with optional sauces that are available.

The inspiration for the noodle bar also came from another restaurant realization: Burkhardt saw noodle concepts popping up all over town, several in walking distance of his office.

Decades ago, school cafeterias had “two options: take it or leave it,” he says. “Those days are gone. Students are consumers like the rest of us. If we don’t provide the options they want, they’ll go elsewhere to spend their money.”