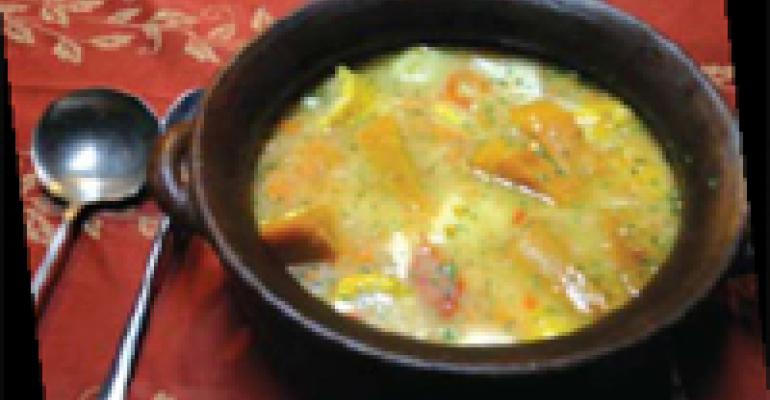 A Land of Culinary and Geographic Contrasts

In the 1990’s, Chilean wine made culinary headlines but few articles covered the country’s equally intersting cuisine. And with it’s immensely varied geographic and climatic expanse, Chile has a great deal to offer chefs.

Geographically, Chile is a long and narrow coastal strip wedged between the Andes mountains on the East and the Pacific Ocean on the West. Just 115 miles wide, if laid over a map of our country’s West coast, Chile’s northern boundary would be in Alaska, and its southern border would be in Mexico.

Regional Delights
These boundaries act as natural barriers to disease and pests and define ideal growing regions for produce such as grapes, avocados and berries, to name a few.

The North, home to the Atacama desert, includes a zone of contrasts between the desert and the fertile valleys. These valleys produce abundant table grapes and the favored muscatel grape used to make the Chile’s national drink Pisco (grape brandy) said to be the perfect accompaniment to empanadas.

The Central Valley, between the Andes and coastal range, has extremely fertile volcanic soil and is considered the center of agriculture. With a mild climate this is the zone of the wine country and Chilean fruits.

The Southern central or Lake District is famous for its spectacular scenery that has been likened to Switzerland. The temperate climate rewards cooks with abundant crops of blueberries, strawberries, apples, pears and Pacific farmed salmon in abundance.

Southern Chile which borders Patagonia is really just opening up to the tourist trade. It is filled with mountains, lakes and glaciers offering fishing (catch and release only), kayaking, rock climbing and extreme glacier hikes. Even further south is the unspoiled wilderness and solitude of Antarctica.

“Often people tend to lump Latino into one bag with chefs creating pan-Latino or Latino-fusion dishes. These are undoubtedly delicious but sometimes the individual nations get lost in the clutter,” says Joelson. Historically Spaniards came to Chile in the 16th century. Chile declared independence from Spain in 1810 and immigrants came from all over the world to explore and settle in Chile. In the late 19th century German immigrants settled in the south. And with the advent of improved communication and transportation of the 20th century chefs were further influenced by French, Italian and English cuisines. “These influences remain in the cuisine,” says Joelson.

Generally speaking, Chilean food is less spicy than Mexican but is spicier than most regional U.S. cuisines. And, in addition to the use of indigenous ingredients, a distinct hallmark of Chilean cuisine is the absolute freshness of those ingredients. The European small-shop tradition of daily shopping is alive and well as cooks choose just-picked herbs and produce from market stalls, fresh-caught fish off the docks and homemade desserts from small family bakeries.