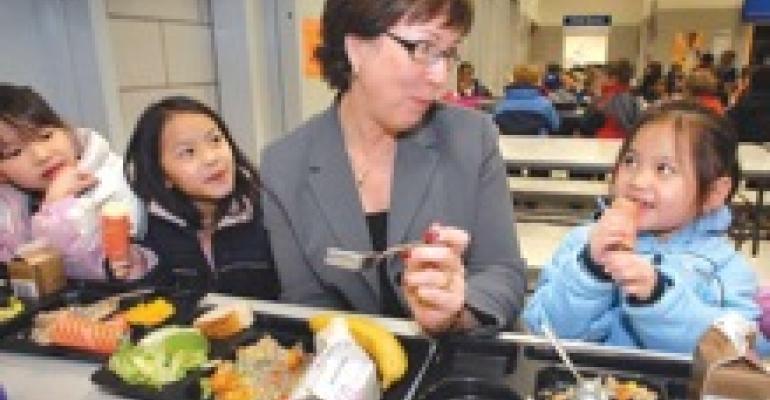 Making it Authentic, Making it Ethnic

Remember when menu items like tacos and collard greens were considered ethnic—even exotic? For most onsite operators, those days

are as long gone as glass milk bottles and cork-lined bottle caps.

Welcome to the world of congee, vindaloo, mangu and suqaar, where foodservice directors are offering menus and services that reflect highly diverse customer and employee populations and a wide-ranging gamut of tastes, special ingredients and preferred flavor profiles.

Pumpkin Soup with Shark's Fin
One of the very first hospitals in the country to try to carve a niche—and establish a reputation—as a culturally blended facility was Garfield Medical Center in Monterey Park, CA. For almost two decades, the hospital has been experimenting with approaches and services that combine Eastern and Western traditions.

Located in the heart of one of the country's largest Chinese-American communities, 70 percent of the physicians are Chinese. A high percentage of the staff speaks Mandarin and/or Cantonese as well as a number of other Chinese dialects and there is a 24hour Mandarin news channel broadcast to patients' rooms.

"We realized early on that designing an authentic Chinese menu would not be as easy as taking the menu from a local Chinese restaurant and cooking the food in bulk," says Jerry Miller, director of food and nutrition services at the 210-bed facility. "What our patients wanted were porridges and stews—the comfort foods—their mothers cooked for them when they were sick as children."

In converting the foodservice at the Cabrini Center for Nursing and Rehabilitation, in New York City's Chinatown to a Chinese kitchen, Rosetta Montalbano, director of culinary services, hired Stanley Tso, a Chinese chef who had owned his own Chinese restaurant in the area for 17 years.

"He has a sophisticated sense of texture and seasoning, a first-hand knowledge of Chinese ingredients and a keen sense of what the population can handle," says Montalbano. Tso is Chinese and Cantonese and "brings this authentic cooking experience with him. The combination of items you see on our Chinese New Year banquet menu is nothing like what you would find on a conventional Chinese restaurant takeout menu. It is very unique."

Yucca and Fried Onions
The first item Tso and Montalbano added to the menu was congee, a rice gruel or soup, which is served three meals a day at Cabrini (plain for breakfast and with added ingredients at lunch and dinner). Sticky rice is served every lunch and dinner and tofu appears frequently.

In Loudoun County, Kollaja says she is expanding the school menu by focusing on vegetarian items because they appeal to a variety of populations. This includes not just vegetarians, but also groups that do not eat beef, chicken or dairy products. Her school menu now includes vegetarian chili, vegetarian lasagna and a number of vegetarian wraps.

Tapping Staff Expertise
To serve her expanding, increasingly diverse student base, Kollaja is relying on her menu committee, which consists of managers, teachers and students, to a greater extent.

"Our school district administration stresses the small-town feeling here even though we are growing," says Kollaja.

"That means we have to be very accessible to parents, teachers and students. Our menu committee was a very informal group for awhile and it met every six weeks. Now it is much more formal and meets every month. It's a good tool for public and community feedback and evaluating menu additions."

The real gift for institutions when their neighborhood and customer base changes is that the profile of their work force, because it is drawn from the same community, changes in the same direction. Chances are your employees will know what your customer base wants because some will be from the same demographic or ethnic groups.

"Talk to your customers and see what they want," advises Ingoglia. "Weigh that against what you are capable of within your time frame and your price range. Good communication will help. Involve your employees in creating new menu items and make them want to succeed.

"You want to start with well-known items, like paella and noodle-based Cantonese dishes or fajitas and yakatori—dishes that are not too much of a reach for many customers to purchase or try," advises Ingoglia. "Once your customers trust you, you can move on to newer, more intense flavors and more exotic dishes." Newer menu items at Stony Brook include scrod Oscar, saltimbocca and scarparillo.

Montalbano has a wealth of cultural and ethnic information on site at Cabrini. "We have 15 cultures represented on our staff and we have only 30 employees," she laughs.

"Where we really see the impact of employee involvement is in our Heart's Desire program. Basically, it allows residents to order anything they want on their birthday and we will get it for them. And we mean anything. Many of them order lobster or steamed whole fish with scallions. Our employees get very involved in this program because it's so personal. One resident ordered baccalao [salted cod fish] for his birthday. An employee may say, ‘Oh, let me make the baccalao' or ‘Let me bring in the baccalao. There is a shop in my neighborhood that makes the best baccalao.'"

In St. Paul, Jean Ronnei, director of school nutrition services, was getting nowhere in her efforts to find authentic ethnic dishes for the school menu. She said she even ran an article in the local newspaper. Then, while working on a county-wide grant application committee, she met a county public health administrator who knew the owner of a local Thai restaurant that employed two Hmong mothers.

A year later, Ronnei approached Abdisalam Adam, a school district employee who is Somalian. Adam, his wife and a friend of his wife's agreed to visit the home of Jim Groskopf, nutrition services' purchasing analyst, and cook up authentic Somali dishes as a sampling.

The recipes were refined and tested and the result was a Somali menu day featuring chicken suqaar at a St. Paul middle school.

Looking for Balance
In reinventing his menu at Stony Brook University Hospital, Ingoglia works with a five-week cycle menu with five hot entrees daily and no dishes repeating within that five-week cycle. His minimum customer cut-off for placing an item on the menu is 75 servings and he will give a menu item three tries to get to that cut-off. "For example, I've tried a penne pasta dish with salmon and white beans. If I am lucky, I will sell 40 to 60 servings," he says. "I will put it on the menu one or two more times to see if I can get those numbers up."

Ingoglia makes an exception to the 75or-off policy for items popular with the very vocal vegetarian group. "We do a lot of tofu dishes that are popular with them. We have a sesame encrusted tofu with Asian vegetables. We might sell only 40 but we keep it on the menu because this group really loves it."

At Cabrini, Montalbano says that she tries to balance entrees so that all cultural groups are represented and also tries to use the same main protein ingredient in both entrees on a particular day. For example, on the day an Italian entree is offered, the other entree choice will represent another culture. When shrimp salad is on the menu, shrimp with Chinese vegetables will be a second option. Chinese do not eat pizza, or egg salad or tuna salad so, when those items are on the menu, a Chinese alternative is always offered.

"It is an eclectic population and our staff's skills reflect that. The chef [Tso] makes a great pasta primavera and our two cooks—who are Polish—make a mean chicken cacciatore and they do a terrific job with barbecued chicken and collard greens."

The introduction of ethnic menu items has been known to pose some unique and challenging stumbling blocks. Ingredients often are hard to find or they are hard to find in large quantities. Non-English-speaking vendors may be difficult to communicate with and unaccustomed to dealing with institutional buyers. And many recipes can be too expensive to replicate on a large scale or the production may not lend itself to bulk cooking, or the taste profiles of popular ethnic dishes may be too unfamiliar to be accepted by a general population.

The biggest barriers for schools in introducing authentic ethnic dishes, explains Ronnei, "is the time commitment and the budget restraints. It takes us a year to get an item on the menu by the time we standardize the recipe and taste-test it.

"For example, we talked about and experimented with sesame chicken over brown rice for about a year. It finally made it to the school lunchrooms this past month. Add to that the fact that we only have about 52 cents in food costs to work with for each entree. There's a limited range we can spend. Maybe we could use diced chicken. But we won't be buying goat."

Kollaja, in Loudoun County schools, agrees that the budget is a huge factor for specialty items. "The federal regulations [on school meals] don't allow for a lot of diversity within the meal pattern. We have production kitchens in our schools so you can't have something on the menu where you only serve five portions. Anything we put on our menu has to be acceptable and popular with a certain number of students."

Ingoglia has trouble getting bean paste and topiko (flying fish roe). But because of Stony Brook University Hospital's large size "I am the number one customer for our purveyor and I have some leverage in getting him to carry certain ingredients for me," he adds.

The main ingredient in gandules, a popular item with students, is "pigeon peas," which she buys in 16-ounce cans from a local grocer. "We can't find this item in foodservice-pack size and end up opening all those small cans ourselves," she says.

Even at Cabrini, located in the center of a neighborhood with an abundance of authentic Chinese ingredients, Montalbano has had problems. It's true she was able to locate beautiful Chinese china dishes nearby for the Chinese New Year banquet and a rich choice of decorations, including silk and gold fabric for window coverings. But for recipe ingredients, the vendors who do carry them, when initially contacted, were not accustomed to dealing in large quantities and were used to cash payments on delivery from local Chinese restaurant customers.

Ethnic's Impact
Adding ethnic items to menus can be financially rewarding. Sales at the Pavilion Cafe have grown by $500 to $600 a day and the number of transactions has increased tremendously. At Stony Brook's Marketplace Cafe the response was immediate and sales are have grown from $13,000 to $15,000 a day to $20,000.

But in such venues as schools and colleges and nursing homes, the impact is in something beyond dollars.

At Garfield Medical Center, the extensive and authentic Chinese food offerings are an important component of the medical center's efforts to adapt its services to better reflect the cultural values of its patients and visitors.

The Somali menu first served at St. Paul's Highwood Hills Elementary School, which has a predominantly Somali student body, was not about the food.

"When we had the Somali menu, we invited the community elders to come in for the meal," says Ronnei. "For them and for the Somali students, the meal showed respect for their culture, it was a recognition, a way of making them feel welcome."