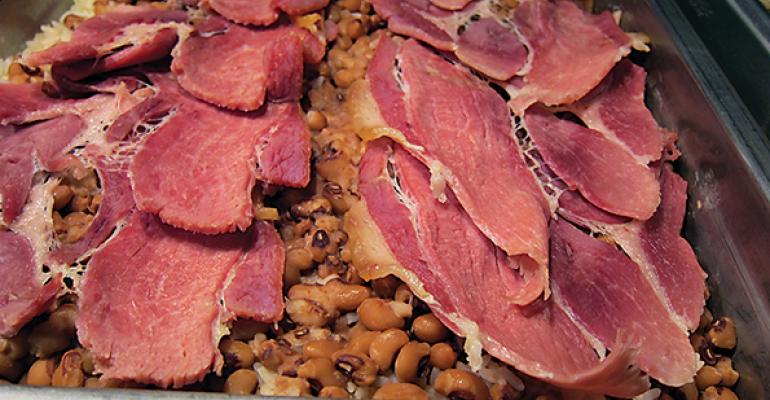 The foodways of Appalachia honor the past and connect to the land.

The foodways of Appalachia honor the past and connect to the land.

Not anywhere near a gimmick or a stereotype, true Appalachian food is about living off the land, fostering a strong sense of community and making the most of it.

“There are so many layers…the romantic layer that is referred to as ‘snout to tail’ or ‘local,’ and then there is the hard-core layer that represents eating what is available and appreciating the food on your plate such as wild asparagus, ramps, pigs’ feet, fresh produce from the garden and fried chicken livers,” says Becky Ellis, who retired from healthcare foodservice and is now a food blogger in Roanoke, Va.

Appalachian food is definitely an American regional cuisine that’s somewhat hard to define. The region stretches from New York to Mississippi, and the influences on its food are diverse.

“Today, Appalachian food does not have a linear history or a predictable shared taste,” writes Mark Sohn in “Mountain Promise,” the newsletter of the Brushy Fork Institute of Berea College, in Kentucky.  “Community-based cookbooks illustrate various ethnic influence on our foods.”

Immigrants cooked what they knew: stuffed cabbage from Croatia, poppy seed rolls from Russia, stromboli from Italy, pierogies from Poland, braised string beans from Greece and shortbread from Scotland.

Now, chefs are rediscovering and preserving a heritage that they may have downplayed in the past, but are reveling in now.

Old Cookbooks Preserve the Past at Appalachian State

Appalachian State University, in Boone, N.C., is in the Blue Ridge Mountains, near the Tennessee line.

The foodservice operation has always been known for its close ties to the land.

“Valuing the importance and preserving the heritage of Appalachian food to our customers and students goes beyond the food itself,” says Pamela Cline, director of foodservices. “It allows our students to develop an appreciation for the history and traditions of local Appalachian generations through food and recipes. It allows our staff to share a part of who they are and how they grew up eating slow-cooked food prepared with fresh garden staples and farm meats.”

The feast took place in several dining locations. There were lots of options for vegetarians—not a  stretch at all, because much of Appalachian cuisine is traditionally meatless.

One example is her Shake Pickles, a recipe passed down to Beaty from her husband’s Aunt Ester.

The name refers to the process of shaking up the jar a few times a day for a couple days.

1. Place cucumber slices in jar. Mix all other ingredients well and pour over pickles. Place on shelf away from drafts and direct light.
2. Screw jar lid on tightly. Shake several times a day for two days; do not place in refrigerator until third day. Will keep up to a year in refrigerator.