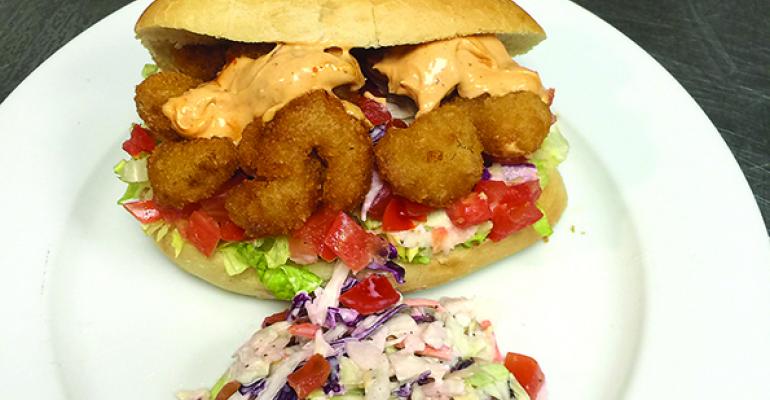 Southern dishes have that special ability to convey the unmistakable feeling of home, even if your climate is more snow shovel than porch swing.

Southern cooking is home cooking.” Those words are being spoken not by someone with a Carolina drawl, but by Mike DeMartino, who has a distinctly Brooklyn accent. He’s executive chef for Columbia University Dining, located in the heart of upper Manhattan.

Many chefs far north of the Mason-Dixon Line have been trying on a Southern accent for some time now, with their own takes on iconic Southern dishes from shrimp and grits to chicken and biscuits and cornbread. Cast-iron skillets and mason jars are everywhere, and customers have Georgia (and North Carolina and New Orleans) on their minds.

“We do a little bit of Southern food every day,” DeMartino says. At JJ’s Place, a casual on-campus eatery on the Columbia campus, shrimp and grits make an appearance once a week, and the students really like them, DeMartino says. And in a mash-up of the American South and the Caribbean, sautéed catfish with plantains has also been a hit.

Recently, celebrity chef Robert Irvine visited campus and prepared lobster po’boys for 2,200 students. The po’boys were topped with a zesty coleslaw and served on a potato bun, making for “just a great, rich, flavorful dish,” DeMartino says. While the lobster version doesn’t make the rotation regularly, a shrimp variation provides a fun, Bourbon Street vibe on the regular menu.