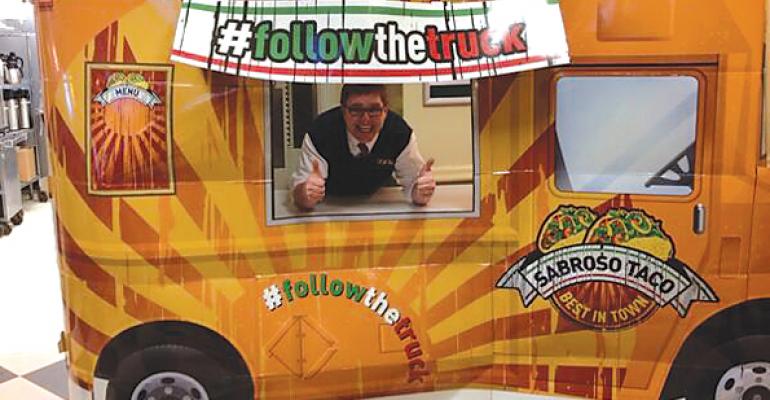 <p>Authentic tacos are a good way to go, even if your food truck is faux.</p>
Menu Trends

Mexican food is always up for a road trip. The simple components and ease of preparation make tacos, tortas, burritos and nachos some of the most road-worthy food truck menu items of all time. Plus, the fiesta vibe and the fiery flavors will make customers want to come along for the ride.

While many commercial food trucks specialize in one genre, food trucks that serve colleges, hospitals and schools often diversify their menu a little more. However, one thing is for sure: When it comes to getting people to follow the truck (on Twitter and in real life), a great taco can go a long way.

That’s the case at Northeastern University, where the H3 (Hungry Hungry Husky) truck regularly gets the crowds lining up when parked at busy campus spots like the quad near the library and student center, outside the bus terminal and near the athletic arena.

“We built a lot of flexibility onto our truck,” says Tom Barton, campus executive chef, NEU. “We have enough pieces of equipment (hot and cold wells, a flat-top grill, a deli station) that we can easily prepare a lot of different cuisines.”

Mexican, Greek and Italian menu items have appeared on the truck at different times, “and we’ve even dabbled in the ‘late night’ business (think concoctions with French fries and cheese),” he adds.

The H3 has recently rolled out a ‘greatest hits’ menu of sorts, after a few years of testing the road readiness of lots of different cool food truck items.

When the rubber meets the road, menu wise, Mexican food is always ready to roll. Adobo chicken tacos and vegetarian tacos with grilled zucchini have been perennial best sellers.

“For us, tacos have always had a good buzz,” Barton says, adding that the tacos sold on the truck are more taqueria than Taco Bell. “People know authentic and they want authentic. So if it’s not something we can execute on the truck, we won’t do it.”

It’s key to strike a balance between which components of a menu item are done ahead of time in the commissary and which are done to-order on the truck.

“We do as much prep as possible, while maintaining the quality of the food,” Barton says. “There’s a fine line between a great mise en place and the food not being as fresh as it could be.”

For example, the roasted corn that’s found in the pico de gallo for the chicken tacos is done ahead of time, as are the Technicolor pickled onions that really dress up the tacos. Assembly of tacos is done on the truck, so customization is possible. And zucchini for the veggie tacos is done on the flattop, small-batch style during peak times.

Reaching Out with Great Tacos

One full-time employee and one part time employee keep the truck moving, starting at around 7 a.m., Monday through Friday. Work begins with prep at the kitchen of the Virginia Baptist Hospital. The truck then hits two locations, where it does between 75 and 90 transactions each day. Menus are communicated through Twitter and Facebook, often using the hashtag #getfresh. Like the H3 truck, Code Fresh has a diverse menu that rotates. Some cool items include the Chicken Cordon Bleu Sub, the Chicken-Mango-Spinach Wrap and the Turkey Apple Havarti Salad. The truck is new (just a few months old) and different items are being rolled out regularly. Tacos have been met with enthusiasm, Roberts says.

A big best-seller on Code Fresh is the Fish Tacos (two in a serving) with Southwestern Corn and Black Bean Slaw: grilled tilapia on a toasty warm corn tortilla, dressed with a creamy house-made slaw of black beans, red cabbage, cilantro and toasted cumin.

While the truck sells another fish taco, with traditionally beer-battered and deep-fried cod, the grilled tilapia better fits the truck’s larger mission as a representative of a major healthcare organization, Roberts says.

“Our truck isn’t just one-dimensional,” he says. “I think with the increasing focus on healthcare reform, hospital systems like us have the opportunity to be leaders in community health.”

When the truck goes out into the community for festivals, fairs and events like the recent James River Wine and Music Festival, Roberts says he hopes to deliver a message along with the food: “Using fresh ingredients to make a great meal isn’t hard as some might think.”

No Food Truck? No Problem!

Wanting to jump on the bandwagon, as it were, of food trucks, but don’t have the truck, the budget or the desire to operate the real deal? One could consider what Flik Independent School Dining did: build a fake 3-dimensional truck out of heavy-duty cardboard, create an awesome, educational menu and bring the truck around to all the schools.

Flik already had a program in place, the Traveling Flavors booth, that shows up at different K-12 accounts with an exciting experience for the kids: the food, music and costumes from cultures around the world.

Jumping off from that concept, “we wanted to play into the food truck frenzy,” says Adam Byrne, district manager/corporate chef, Flik International. So the Sabroso truck was created.

Byrne and the team of chefs set out to create a Mexican food menu that had authentic flavors and would appeal to kids and be educational, too. What they came up with really worked: The basic menu was hand-crafted tortillas in white or wheat and then a choice of carne asada (steak), pulled chicken or veggie taco (seasonal vegetables, bulgur wheat and beans).

“Seeing the tortillas made was a real shock to some of the kids,” Byrne says.

Some schools opted to go beyond the basic menu, with a “deluxe” food truck menu that included the three main tacos, but also shrimp, fish for carnitas (pork) tacos. Each account now has the option (and the know-how) to run any of the other items again on future menus.

“The reason it was so successful is that the manager’s user guide spelled out exactly how to roll out the program,” Byrne says.

At one school, the “food truck” scene got even more authentic when a school security guard wrote up a “parking ticket” for the Sabroso truck.

School kids in Sunnyvale, CA, have a lot of choices for lunch. The Fremont Union High School District is an ‘open campus,’ which means the kids are free to roam during their lunchtime, and they’re tempted with more than 50 nearby venues. And that includes In-N-Out Burger.

So Bill Schuster, nutrition services coordinator of Fremont Union High School District, has his work cut out for him when plotting a course for the five food trucks that serve the schools.

“When students see a food truck, they are expecting what they see in downtown San Francisco,” Schuster says. “But on these trucks, the food has to meet the nutritional guidelines, and I’m doing each item for $1.20 food cost.”

In spite of the uphill climb the food trucks, Schuster has some tips for success:

• Offering Mexican menu items can be very economical, thanks to low-cost ingredients like beans, which the USDA counts as a protein. The Fremont trucks have a lot of success using beans in nachos, fajitas, burritos and enchiladas.

• Using baked fish (seasoned simply with lime, salt and pepper) on fish tacos is a way around deep fryers. When served with a creamy slaw, no one’s going to miss the beer batter.

• Tacos should be assembled in the truck per order, but items like burritos can be made ahead of time. When making tacos, Schuster recommends lining  up the hard shells in 2” hotel pans for extra stability.

• Mexican lasagna is a great way to feed a crowd. Pre-bake a hotel pan of layered pasta, salsa, beans, meat and cheese and then just cut into squares. Easy to serve and craveable, too.

• House-made salsas and fresh herbs on the truck really add to the freshness factor.