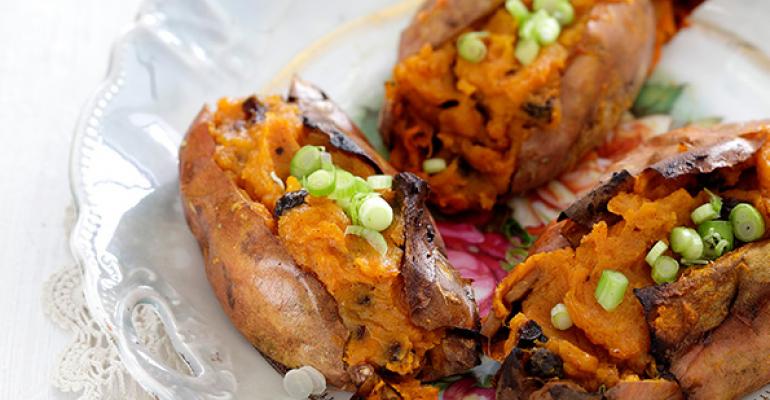 Food is central to Jewish religious practices and symbolism. Everything that’s consumed (or isn’t consumed) has meaning. And on Passover, which takes place this year April 3 to 11, the focus on food is especially important.

There are a number of symbolic foods eaten at a Passover Seder, the ritual service and ceremonial dinner for the first two nights of Passover. During the seven days, leavened products—including bread, cereals, etc.—or chametz, are forbidden to be kept in the Jewish household, let alone eaten. As told the in Hebrew Bible, when the pharaoh of Egypt released Jewish slaves from bondage they were required to leave quickly, with no time to allow for their bread to rise. Eating unleavened bread—called matzo—reminds Jewish people of their history.

Passover is a reminder to be mindful of eating, and Kenden Alfond, founder of the website/recipe resource Jewish Food Hero celebrates this connection with Passover recipes that pay tribute to traditional dishes and ingredients prepared by mothers and grandmothers but are also plant-based and healthy, more in line with contemporary vegan/vegetarian fare.

“Passover has the potential to create a healthy experience for our bodies: seven days of eating simple food in an intelligent way,” says Alfond, who currently lives in Cambodia and has spent the past 10 years living around the world, working on humanitarian, post-conflict and development issues with the United Nations and the American Jewish World Service. “Passover foods spark emotions and memories while connecting us to our bodies. If there was ever a holiday devoted to connecting our minds and bodies, this is it.”

Instead of seeing the Passover-week food restrictions as limiting, Alfond shifted her “Passover mindset” away from one of deprivation and toward one of simplicity, she says.

Alfond has developed recipes that put the focus on what is allowed: a plant-based diet that represents an opportunity to lighten up, feel refreshed and break free of bad food habits.

While a Jewish person can’t have toast for breakfast during Passover, Alfond emphasized the fact that an item like quinoa porridge topped with fresh berries is a great option.

She takes on traditional Passover recipes with health-conscious adaptations. The recipes for Mock Chopped Liver and Twice Baked Sweet Potato Tzimmes are updates on dishes that have traditionally found a place on the Passover table, but instead of ingredients like chicken livers, veggies take a starring role.

“Chopped liver is something a lot of Jewish people remember their grandmothers making,” Alfond says. Mushrooms and walnuts provide meaty texture and rich flavor to the Mock Chopped Liver, which can be served as a small plate or appetizer, with matzo and celery sticks for dipping.

Classic tzimmes has many variations, but it’s usually a baked casserole that features carrots and honey. The Twice Baked Sweet Potato Tzimmes replace carrots with sweet potatoes, and the dish is made sweet with oranges, cinnamon, prunes and maple syrup.

“Jewish Food Hero is in part about making our favorite Jewish foods healthier,” says Alfond, who holds a certificate in plant-based nutrition from Cornell University and a masters in psychology from Naropa University. “It’s about trying to celebrate beautiful, simple food that can provide an emotional balance.”

The Passover plate itself is history—the story of the Jewish people—on a plate, told through food.

“Jewish food has a script,” Alfond says. “And that’s how it touches different chords.”

The Passover Seder Plate is the highlight of Passover, where the narrative of the Israelites’ long, arduous journey to freedom plays out. Alfond points out that every ingredient on the plate is plant-based. And each item has a meaning: