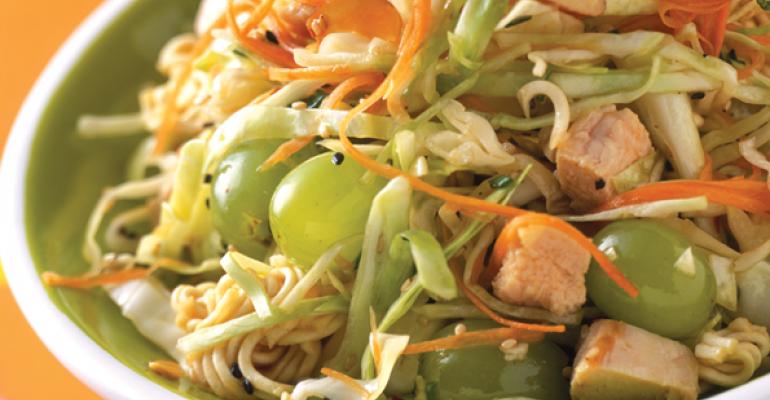 <p>Some noodle bowls, like the Pacific Rim Ramen Noodle Salad with Grapes, evoke a sense of place. In this case, it&rsquo;s the California coastline.</p>
Menu Trends

Rice and noodle bowls are right at home in onsite foodservice: they’re recognizable, customizable, good on food cost and ready to grab-and-go. But when one-bowl meals are made with flavors that mean something to your customers and chefs, it’s a whole new connection.
All across the country, inspiration for one-bowl recipes comes from a hometown favorite one-dish special (the Cincinnati Chili served at Oakhills Local SD in southern Ohio) or from a favorite bowl that evokes a hometown half a world away (the Filipino chicken bowl at Vallejo City Unified School District in California).

The Philippines by Way of Vallejo

Kerri Braverman, director of student nutrition services, Vallejo ISD, is enthusiastic about the diversity in the city. “A new report just showed that Vallejo is the most ethnically diverse city in the nation,” she says.

That diversity is found in the school classrooms and kitchens as well, something Braverman wanted to tap into when new whole-grain regulations came down earlier last year.

“We went all-whole grain, and I needed to get my kitchens used to cooking with brown rice instead of white rice,” Braverman recalls. An in-house brown rice recipe contest turned up an amazing Chicken Adobo Rice Bowl, created by a Filipino cook.

“We have such a diverse community that we serve, it’s great to add things to the menu that will taste like home to more kids in the elementary, middle and high schools,” she says.

Braverman’s team took the chicken bowl recipe, with its sauce of chicken stock, garlic, soy sauce and bay leaves, and scaled it up (way up…while not nearly the largest district in California, Vallejo USD serves 7,000 lunches every day).

That kind of work strengthens the bond in the kitchen and resulted in a bowl that’s been a big hit so far.

“The central production kitchen staff worked together with the creator of the recipe, and they got it perfect,” Braverman says. “It really brought everyone together.”

The line in front of a food truck is another way great food can bring people together. Foodies visiting New York City hate to miss the next hot food truck, and it’s always good to ask a local for the lowdown. There’s one food truck that’s a must-eat, according to Executive Chef Timothy Gee, CEC, of Robert Wood Johnson University Hospital in New Brunswick, New Jersey.

“It’s on West 53rd St., and there’s always a line there. It’s called The Halal Guys,” Gee says. “They have yellow rice with lamb or chicken in white sauce, and it’s so good.”

Looking to bring some of that food truck mojo into the RWJ hospital café, Gee worked on a recipe and now offers the Halal Chicken Bowl as a special. Get the recipe.

Many different bowls are on the menu rotation at Oakhills Local SD, including a classic KFC-inspired mashed potato bowl with corn, carrots, gravy and chicken nuggets; a brown rice bowl with broccoli and General Tso’s chicken; and a colorful stir-fry-style bowl with crisp veggies.

But the bowl of Cincinnati Chili, that earthy, cinnamon-scented brew from Ohio’s Queen City, is always a comforting favorite on days when it’s on the menu, according to Linda Eichenberger, director of food services.

This particular chili is one worth trying, especially if you’ve never had the chance to get to Ohio for the original. The Greek flavors are reminiscent of that savory-sweet-earthy Greek lasagna dish, pastitsio. As a bowl, Cincinnati chili works perfectly, as it’s traditionally layered on top of spaghetti with beans, cheese and onions.

The Healthy-Eating Aura of California…in a Bowl at UCLA

Southern California: the land of  sunshine and acres of the freshest produce...healthy food is a natural theme for UCLA’s new all-healthy dining hall, the state-of-the-art Bruin Plate.

Before Bruin Plate opened, Executive Chef Kevin Aiello immediately worked to highlight the fact that the food is flavorful, rather than just ‘good for you.’  “Freshly Bowled,” one of the stations, offers ‘chef selection’ bowls that can be customized and/or made vegan. Since it’s California, the plates are colorful and...well...far-out!

“The Red Lentil Stew reminds me of the sun,” Aiello says, referring to a vegetarian bowl of wheatberry topped  with roasted golden beets and kale chips. Read more about the Bruin Plate menu.

Rice bowls are custom made at the Poblano’s Mexican food station at St. Mary’s Regional Medical Center in Lewiston, ME.  The Mexican bowls are offered in two sizes, 24 oz. and 12 oz.

The smaller size appeals to those looking for a quick snack, especially hospital employees, according to GM Dennis Bouyea, Metz Culinary Management.

Indian Cuisine: Are Ready-Made Concepts Right for You?
Jan 23, 2014