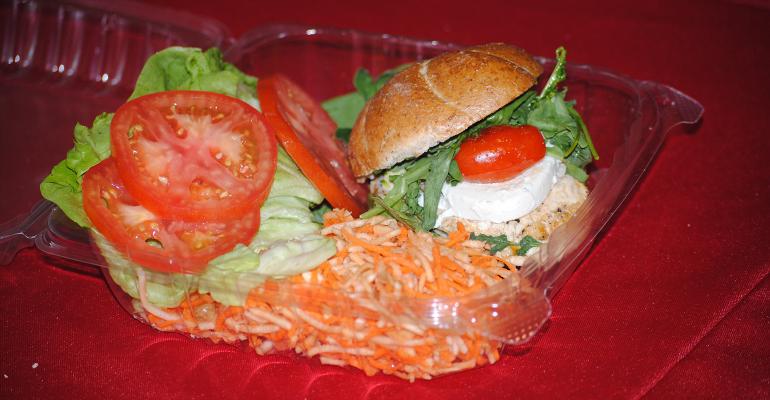 Customers had long told Executive Director of Dining Services Joseph Charette that they love the convenience of grabbing takeout from Rutgers’ dining halls. But they didn’t love the lack of healthy options. So this spring, the New Jersey school started rolling out a new, veggie-centric menu. The changes were the culmination of student requests coupled with Rutgers’ involvement in several healthy eating initiatives. In 2015, Rutgers opened the New Jersey Institute for Food, Nutrition and Health (IFNH) to research solutions for the childhood obesity epidemic and obesity-related disorders. HARVEST, the institute’s dining venue, was designed to showcase IFNH’s mission by serving a whole-food, plant-forward menu. “There’s no white rice, no white flour, not even orange juice,” Charette says.

Shortly after that, Rutgers became a member of the Menus of Change University Research Collaborative, a healthy eating initiative spearheaded by Stanford University and the Culinary Institute of America that uses campus dining facilities to encourage young adults to adopt healthier food and lifestyle habits. At the same time, the university was approached by the Humane Society’s Food Forward program, which seeks to help schools meet the growing demand for meatless meals. Chefs from the program came to Rutgers for a weekend intensive, where they trained Rutgers foodservice staff to prepare 50 different plant-based recipes.

With all of these pieces in place, Rutgers had the demand, resources and knowledge to put fruit, vegetables, whole grains and lean proteins at the center of the plate. They started small, rolling out healthier offerings at four of their takeout locations in early April. Each day of the week focuses on a different theme including build-your-own burgers, pasta, Asian flavors or sandwiches.

But students won’t find the usual cheeseburgers or fried sweet and sour chicken. Instead, there are housemade veggie patties made from ingredients like beets, beans, cauliflower, sweet potatoes and quinoa. Pasta dishes like eggplant rollatini over zucchini noodles emphasize fresh vegetables over cheese and cream. And rather than serving the grilled lemongrass chicken, tofu or shrimp with white rice, students can choose from sesame broccolini and soba noodle salad or purple cabbage, red rice and adzuki and mung bean salad. These updates might sound massive to most. But much of the infrastructure to implement these changes had already been in place at Rutgers, Charette says. “For instance, we had a burger made with beets. But how do you get it to bind together and make it taste acceptable? That had been done over the past couple of years at HARVEST,” he explains. Rather than start from scratch, Rutgers based its new takeout offerings around HARVEST’s existing menu. Then, HARVEST’s chef trained dining hall foodservice staff to make the new recipes. Says Charette, “There wasn’t a lot of thinking on how we could pull this off. The thinking was, ‘what menu items will be successful?’”

Charette and his team broadcast the menu updates to their student advisory committee and invited students to the HARVEST recipe training session to help spread the word. And barely a month in, they’ve already generated plenty of buzz. Takeout sales increased by 30% during the first week, and students have been posting positively about the menu changes on social media. The only downside was that initially, Rutgers wasn’t prepared for such an overwhelming response. “We saw that we might be running out of some items before the end of the evening. But once we figured out how many people were coming, we planned that into production,” Charette says.

Plate costs haven’t gone up, either. It’s true that some of the new dishes are more labor-intensive than their meaty counterparts. Veggie patties, for instance, need to be formed by hand. But plant ingredients also tend to be cheaper than meat. “So between the labor and the food, we’re coming out where we were before,” says Charette. “And as the volume gets larger, you get more efficient. So it has the potential to save costs over time.” By the fall, the five or six most popular new items will earn a permanent spot on the takeout menus. Charette hopes to use the momentum to make more healthy changes in the dining halls after that—like serving whole, fresh-roasted sandwich meat instead of cured deli slices, or baking wings instead of frying them. “It’s a very hot topic right now, and we’re trying to react to what people are expecting,” he says. “We’re just starting, and I’m feeling like this is here to stay.”