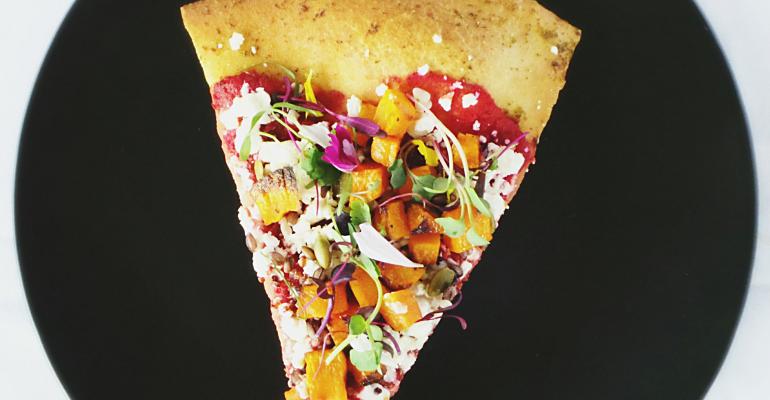 Pie in the Sky

Pizza purists, look away. The following pies are not authentic, not traditional and definitely not boring.

Sometimes, those “why didn’t I think of that?” combinations of toppings can be a complete accident or stroke of genius that results in iconic pizzas. In the tradition of Wolfgang Puck’s famous smoked salmon pizza that shocked (and delighted) in the 1980s and California Pizza Kitchen’s barbecue chicken pizza, the most interesting pies challenge previously held ideas about pizza.

Silicon Valley by Way of Italy
Born in California and educated in Italy, Anthony Kresge is a chef who knows pizza. He’s executive chef with Epicurean Group at the Arcade Café, which serves a Silicon Valley software company in Santa Clara, Calif.

During his time at the Italian Institute for Advanced Culinary and Pastry Arts, Kresge learned there are more than 18 versions of classic Italian pizza.

“Each of those Italian pizzas use different ingredients from a particular region,” he says, drawing a parallel between regional pizza preferences in this country. “Here, we have barbecued pork pizza in the South, pineapple and ham pizza in Hawaii, deep dish in Chicago…”

At the Arcade café, Kresge offers two different pizza selections every day (one meat and one veggie), cooked in a few different ways: in the pizza deck oven, the conventional oven or on the grill. “While not everyone has the luxury of a traditional wood-fired oven, you can still offer a great pie…you just have to be creative,” he adds.

The customer base of Silicon Valley professionals definitely make up a global community, so pizzas tend to be more jetsetters than comfortable old standbys.

Kresge’s go-to model for creative pizzas is a pizza topped with a specially designed salad that compliments the toppings, served directly on top (that’s his California sensibilities showing). The grilled Indian butter chicken pizza is topped with a pickled vegetable slaw flavored to the max with cilantro pesto and mango chutney. The Moroccan braised lamb shoulder pizza is topped with feta cheese and a cucumber-tomato-mint relish. The caprese, usually a predictable pie, is made the traditional way but with mesclun and blood oranges arranged on top.

From Picky Eater to Pickled Beets

One great thing about pizza is its dual nature: a safe starting point that can appeal to a wide range of eaters, from the picky (hello, plain cheese pizza) to the gourmand (pickled beet, black barley and butternut squash pizza, anyone?).

Hard to believe now, but Ian Ramirez, executive chef at Calvin College in Grand Rapids, Mich., once fell into the former category.

“I never strayed too far outside of what I knew, and what I knew was plain and boring,” Ramirez says. “Except pizza…pizza was like a religion to me; it always tasted good. Who knew I would become a chef and expand my taste buds to anything and everything?”

Kids are also into culinary mashups, so in honor of National Pastrami Day (who knew?) Edmund Wetterwald, executive chef with Flik Independent School Dining at the Groton School in Massachusetts, created a pastrami pizza.

It’s made with pastrami, Gruyere cheese, sauerkraut and mustard, sprinkled with toasted rye crumbs. Wetterwald definitely has his mind’s eye set to pie in the sky with new ideas he’s about to try: linguini with clams pizza, braised short ribs with mushroom and goat cheese, fried calamari with pepperoncini (a local Rhode Island favorite), and last but definitely not least, a pizza with lobster, shaved fennel, tarragon and vanilla.

Jim Roth, executive chef at Elmhurst Memorial Hospital in Illinois, recently worked with the Idaho Potato Commission to develop a potato-tomato-asparagus pizza that starts with dough made of shredded potato and features some shredded potato on top.

“It gave it a really nice texture and a nice flavor, too,” Roth says, adding that most of the time he relies on premade flatbreads and pizza dough to save labor. He seeks out good quality products, then focuses on the toppings. The café boasts a gas-fired brick pizza oven, so flatbreads, naan bread and pizza are available every day.

One of the most popular pies at the moment is Mexican pizza with salsa, beans, chorizo and a blend of Mexican cheeses, tortilla strips and onions on top. Korean barbecue pizza has been another menu star.

At a recent event at The Culinary Institute of America’s Napa Valley campus, the U.S.A. Dry Pea & Lentil Council celebrated the Year of the Pulse with, among other activities, a demonstration of how chickpea flour can be used to make a gluten-free pizza crust.

Using lentils and beans as a pizza sauce is another idea that came about at the event. On the pizzas that were made, a black bean sauce added a hearty component that’s very different from traditional marinara sauce.

At Calvin College, Ramirez uses the sauce as a way to play with the flavor profiles. He likes to use romesco sauce, a more unusual alternative to marinara that’s made with roasted red peppers and almonds on a pizza with spicy grilled octopus, grilled asparagus and shaved manchego.

“For the sauce I also use things like Mexican moles, chimichurri, hummus, leftover squash purees, babaganoush, Dijon or charred carrot pestos.” Ramirez says, revealing his overarching creative pizza strategy: “I pretty much put anything on my pantry on a pizza and see if it works.”

To get your pizza creativity firing, check out these 15 Pie in the Sky Pizza Ideas.