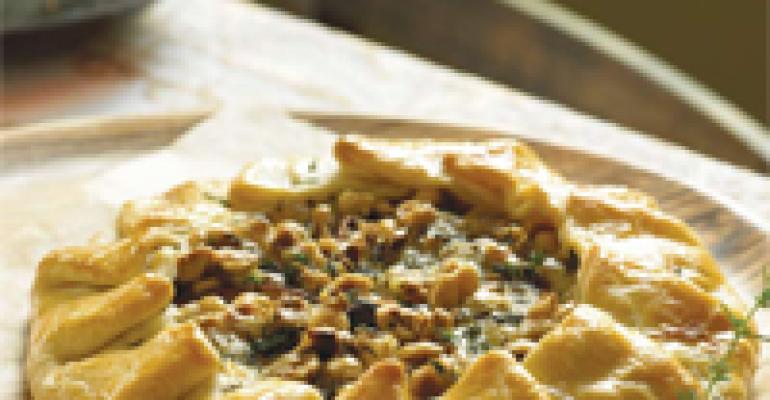 Pies: From Sweet to Savory

What makes something a true pie? One technical and narrow way of looking at it is to define pies as combinations of sweet or savory ingredients held in a pastry crust and baked in a deep dish with sloped sides (as opposed to the straight and shallow sides of a tart). But since pies by their very nature are made to offer down-home, comforting satisfaction, why be a stickler about nomenclature?

As Mark Ainsworth, a professor at the Culinary Institute of America in Hyde Park, NY, puts it, “A pie is anything in a dough that’s surrounded, wrapped up or encased. Every culture has pies—they range from galettes and turnovers to pizzas, empanadas, African briks and samosas. The common element in all of them is the use of wheat flour, since something like rice flour doesn’t have the protein to allow it to roll out without difficulty.”

And difficulty is just one word that comes to mind when contemplating rolling out pie crusts. “There are so few ingredients used to make pie crust that both the trick and challenge hang on the manipulation of those ingredients,” Ainsworth explains.

But when onsite-made pie crusts are called for, Ainsworth offers these insights for the best results:

Make sure all ingredients are “super” cold, including the flour, before beginning work.

Determine whether the crust will be flaky or mealy/crumbly. For flaky crust, cut the fat in until it is the size of a pea; for mealy/crumbly crusts, work fat in completely with hands or food processor.

Once the dough is mixed, rolled out and put into the pie pan, refrigerate it again before filling it. This keeps the fat from getting too warm and separating.

Use pie weights; or better still, nest another, empty pie pan on top of the pan with its prepared pie crust dough; flip the two over on a cookie sheet and chill before filling the crust and baking. This keeps the crust from pulling down into the pan.

Dock or punch fork holes in the crust just before baking.

Understand when the pie shell should be pre-cooked and when it should not. Types of pies that cook quickly – quiche or lemon meringue, for instance – should be made in a pre-cooked shell, as their baking times are too short to allow the crust to get crispy. Longer-cooking pies, like apple pie, don’t require the pie crust to be pre-baked.

Facing the Fats
A near foolproof way to make pie dough in the old days was to use partially hydrogenated shortening. But now, with many onsite operations moving away from trans fats, ease of preparation has given way to other concerns.

At San Diego State University, Executive Chef David McHugh notes the campus now posts “trans fat free zone” signs around the dining halls and retail outlets, and the bake shop has completely changed over to using butter exclusively in the pie crusts and baked goods. “You get a richer, deeper flavor,” he says.

Simon Stevenson, pastry chef and bake shop manager at the University of Massachusetts at Amherst, went in a different direction in his search for trans-fat-free pie dough.

“We began testing different products about a year and a half ago,” he says. “What we ended up with is a palm/soy blend for making all our pie dough. It’s easy to work with, holds and refrigerates well, and results in a flaky crust.”

This “new” fat also allows the pie crusts to fit into vegetarian, vegan, kosher and halal menus as well, Stevenson points out.

Onsite chefs continue to report what will come as no surprise: apple pie is still America’s favorite. Because he has baked so many of them over the years, Stevenson has developed some tips for an apple pie that’s as satisfying to the taste buds as it is appealing to the eyes. Normally an advocate for fresh, seasonal produce in his pies, Stevenson has found a prepared product of fire-roasted apple slices that he prefers to the fresh, although he adds his own spices and flavorings to the filling.

“When you use raw apples in a pie, they bake down and you get separation—that air gap—between the pie and the crust,” he says. “Visually, that can be appealing, but when you bite into it, it’s disappointing. Since these apples have already done their shrinking, they don’t bake down any more and you get a full pie.”

Roasting and grilling pie ingredients make all the difference in flavor in some of the sweet and savory pies at San Diego State, Chef McHugh notes. For high end events, a hint of grilled, caramelized fruits makes an out-ofthe- ordinary filling. For savory pies, McHugh draws on the university’s close proximity to the southern border, and layers in “a Mexican flair” to many selections.

A savory tamale pie, for instance, can be made cost-consciously with ground beef and frozen corn kernels; but for special occasions, McHugh likes to roast the corn with peppers, add marinated, slow-cooked and chopped pork shoulder, and top with a masa dough crust.

“This has increased our dessert sales 200 percent,” he says. “Customers still want dessert, but they don’t want a large piece of pie. So we started purchasing three-inch phyllo dough tart shells; we add our own key lime, blueberry, sweet potato/apple, peanut butter or other fillings, and price them at $1.25 each. We’re selling 60 to 70 a day—and making friends with them, too!”