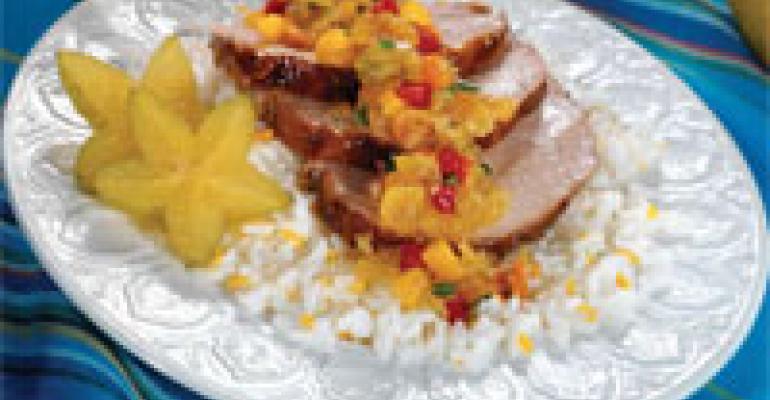 Beef & Pork get a flavor boost when international flavors and cooking techniques join the party.

“Today's palate is a lot different than it was 20 years ago,” says Derek Roy, executive chef, Bon Appetit Management Co., St. Joseph College, West Hartford, CT. Roy believes people are much more in tune with intensely flavorful world food trends and bold tastes than ever before.

“The melting pot has come full circle,” he adds, noting that while ethnic treatments of beef and pork definitely pack a flavorful punch, they can have the added benefit of often employing underutilized cuts of meat, which tend to be thriftier choices in the face of rising operational and food costs. The result is good taste and good value.

“From an economic standpoint, those dishes often originated in environments where people needed to make the most of their food budgets, so they developed ways to bring out the flavor with other ingredients,” Roy says. “It really is ‘soul food.’ It's good for the soul.”

The vehicles that deliver those enhanced flavors are often marinades, rubs, sauces, condiments and cooking techniques. Roy's Sofrito Roasted Pork features a Latin American condiment, sofrito, which can boost the flavor quotient of just about anything (see recipe).

Consider classic ethnic flavor profiles: pineapple and jerk seasoning for Caribbean food; cilantro and cumin for Mexican food; lemon and olive oil for Greek food…the list goes on and on.

Paying attention to the way spices work in different cultures means taking the time to learn about how flavors work. “Be true to the culture's food that you're cooking,” says Rolf Baumann, corporate chef for Delaware North Companies Sportservice.

Abrahamson springs to action during the short-lived Minnesota strawberry season to flavor his Slow Roasted Berkshire Pork Loin. “We make a peppery, sweet and tart strawberry jam in bulk, preserve it, and complement many dishes with it throughout the year,” he says.

Like the strawberry jam, flavor profiles can emerge from a favorite farmers' market, but inspiration may also come from half a world away. Baumann notes that wars — like the one we're in now — are often catalysts for new tastes coming home with the soldiers. He predicts even more Middle Eastern flavors becoming popular in mainstream U.S. kitchens.

A lot of chefs agree that almost anyone can make a filet mignon taste great, but it takes more artistry to coax the juicy flavor out of a flank steak. When done right, the “lesser” cuts of meat like beef or pork shanks or osso bucco have a lot to offer. “The cheaper cuts have more connective tissue; the active muscle groups lend more flavor,” Roy from St. Joseph College says.

“The nonprimal cuts have less fat, so you have to bring the flavor back,” Baumann says. For Pork Adobada, a favorite dish at Miller Park in Milwaukee, pork shoulder is marinated for four hours in a paste of orange and pineapple juices, chipotle pepper puree, ground cumin, apple cider vinegar, oil and salt. When the pork comes out of the oven after about two hours of cooking, it's ready to be pulled apart with a fork.

Some of Baumann's main go-to ingredients for marinades include: beer, tomatoes, citrus and wine.

At Harvard University Dining Services, Director of Culinary Operations Martin Breslin employs vacuum marinating equipment in the school's culinary production center to enhance protein products more quickly and with less marinade. (see recipes NOTE: The amounts would not be enough to prepare the same amounts in a traditional manner.)

Lynn Moore, RD, LD, associate director of Food & Nutrition Services at Emory Healthcare, Atlanta, GA, makes a very popular item called Flank Steak with Corn & Tomato Relish. “It's economical and heart healthy,” Moore says, and is a big hit in the doctors' dining room, where beef generally isn't very popular. After a 24-hour marinade of garlic, vinegar and herbs, “The meat is cooked and then cut into super-thin slices on the bias.”

Cooking methods like slow roasting or braising work magic with a variety of cuts at St. Joseph Colllege. Roy braises Asian BBQ Short Ribs for a few hours after searing them and before finishing under a broiler so they're unbelievably tender, yet crispy on the outside with a sauce of orange, ginger and hoisin. “Braising really lends itself to long, slow cooking times, and we do it a lot in the wintertime,” Roy says.

Some Words of Caution

Baumann offers serveral caveats. “People try to get crazy and use nine or 10 spices,” he warns. “You don't want to have more than three or four seasonings or flavors on a dish. The tongue can only handle so many tastes at once.”

Abrahamson says his best flavors come from “buying really good ingredients and trying not to mess it up too much” by overdoing it.

“There's a misconception that flavorful food has to be spicy,” he says. “Don't try to ‘kick it up.’ Rather, you're trying to build the flavor in all the parts of your mouth.”

Of the nearly 100 cookbooks on Abrahamson's office shelves, the one he cracks open most for flavor advice is an old one by Cajun cooking trailblazer Paul Prudhomme. “Paul said that if you made jambalaya, say, in three 5-gallon batches, one with a cup of black pepper; one with a cup of white pepper; and one with a cup of cayenne; and then made a third bach with one third cup of each spice, the batch with the combination would taste the best.”

Common sense and conventional rules are great, but that doesn't mean you can't experiment — in small batches. “Sometimes you just have to taste for yourself the fact that juniper berries and cream don't go together,” Abrahamson says with a laugh.

“Keep it simple,” he adds, summing up. “As Americans, we tend to do everything in a hurry. The biggest mistake people make is throwing all the seasonings in at once, and not taking the time to let the flavors build.”