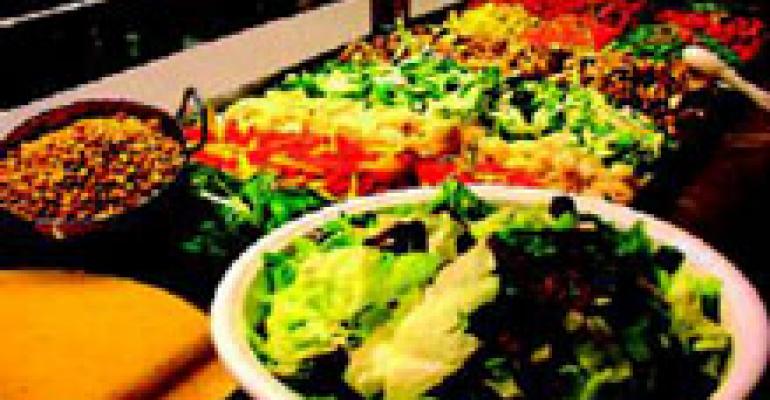 Almost every operation offers salads. But sites that really rake in the profits and customer satisfaction are those with full-blown salad concepts.

Could there ever, possibly be anything new to say about salads? Amazingly, yes. Such a simple idea; yet salads seem to enjoy a resurgence every few years as the new, big thing. What savvy onsite operators are recognizing now is the impact marketing and packaging a complete salad “program” has on customer perception and sales.

Building check averages
At Prudential Financial offices in New Jersey, Director of Foodservices Ron Ehrhardt, FMP, and his Woodbridge-location team originated the Wild Greens salad concept that's currently in play at Compass Group-managed sites around the country. “The tossed-to-order salad program has really taken off,” he explains. “It's now the most popular station in every Prudential dining facility.We initially expected it to be a rotating option, but we've been forced, through customer demand, to run it every day.”

The station is set up with about 100 pre-prepped, 48-ounce plastic salad bowls, already containing mixed greens, stacked behind the line. A station attendant (or two, if it's an especially busy site) grabs a bowl of assorted greens and adds any of the customer's choice of approximately eight different toppings (which rotate daily and can include marinated mushrooms, grilled eggplant, red onion, cherry tomatoes, roasted red peppers, black olives, cheese and more).

It all gets tossed together with a choice of six dressings (two of them homemade), and then topped with four ounces of protein. On a daily basis, customers can pick between two protein choices that range from grilled chicken to Cajun flank steak, broiled salmon and marinated, herbed pork loin. A domed lid is popped on top at the last minute, and the fresh salad is handed to the customer, along with a fresh-baked bread stick.

At $4.99 each, the salads generate an average of $500 to $750 a day. “It's definitely a large revenue-producing station,” Ehrhardt says. “It brings in two to three times the amount of daily revenue that a salad bar does, and the food costs are lower, since a salad bar creates a lot of waste.”

There's also less physical space needed for the tossed-to-order concept, thus generating more revenue per square foot than a salad bar, he notes. “And when tossing to order, you can carefully control portions. You do need more labor to run this type of station, but there's less labor to prep than with a salad bar. To be appealing, a good salad bar needs to contain 30 to 40 items; here, we're prepping eight items a day.”

And yet, the perception of the tossed-to-order station is “vastly superior” to that of a salad bar, Ehrhardt argues. “Anytime you make something custom, it brings a level of fine dining to the customer.”

Safety concerns
CulinArt, the Lake Success, New York-based contract management company, began featuring made-to-order salads as a special exhibition option for an account concerned over salad bar safety issues a few years ago. It was so successful, it has since grown into the Spinning Salads concept for the company's business sites and Great Caesars for the college segment.

Having a large number of choices, just like a typical salad bar— but presented in an exhibition style, made-to-order format—is just what customers want at locations such as the New York Mercantile Exchange (NYMEX) and Cadwalader, Wickersham & Taft law firm. “Customers love that it's a healthy choice, and low carb dieters are excited about it for its large range of choices,” explains Director of Culinary Development Roger Beaulieu.

Although each set-up is customized to the individual account, CulinArt's basic approach is to present each diner with a handmixed bowl of greens, five to six topping picks, dressing, and a protein choice. Prices vary from $5.50 for a 48-ounce bowl at NYMEX to a range of $3.20 (for a basic 32-ounce bowl) to $5.95 (a 40-ouncer with premium grilled seafood) at the law firm.

“The profitability on that station is fantastic,” enthuses Foodservice Director Carlos Rivera. “We portion control things so precisely, and yet, customers feel they're walking away with something incredible. It works for everybody.”

At CulinArt's Iona College account-in New Rochelle, NY, students have the option of getting their custom Caesar salad in a lavash wrap instead of a bowl. “We shape the 15- to 18-inch flat bread into a cone, fill it with salad, and stick a fork in it so students can really eat on the go,” explains District Manager Jeff Powell. “They start off eating it like a regular salad, with the fork, then finish it up like a wrap.”

Small space solution
Faced with just six feet of space in which to build a salad concept, Foodservice Coordinator Kelly Connors dreamed up his own tossed-to-order salad program two years go at Foodworx, a dining facility at the University of California, San Diego. “We took a four-compartment hot unit and converted it into a cold well, and that's our station,” he says.

With 22 ingredients nestled into the well, workers produce six different made-to-order salads daily from the station, ranging from a garden salad to Oriental, Caesar, tortilla, pasta and plain tossed salad.

The station attendant uses “cheat sheet” recipe cards on the back side of the line with step-by-step instructions for making each of the six salads. As an order is placed - customers can choose between large or small size salads - the server mixes all the ingredients and dressing in a large mixing bowl, empties it out into a to-go container, and adds the protein choice (hot chicken, tofu or cold shrimp). Having a ready supply of 30 to 40 large mixing bowls helps keep up with traffic flow.

Premium ingredients, such as an avocado quarter or extra protein, are placed on top so the cashier can readily see and charge accordingly. “We don't fool with stickers on the salads—the cashiers just know the prices of the small and large salads, and how much extra ingredients cost,” Connors says. “Customers love the showmanship of the station, seeing their salads crafted before them. This has just got so much more zing than a salad bar.”

Connors also notes that food costs run about 29 percent for the station, which churns out between 250 and 300 salads a day. “With the three different protein topping choices available for the six salad styles, there are actually 18 different salads in two different sizes going out of this six-foot station every day,” he says. “It's an incredible amount of variety coming out of such a small space.”

Less is more
When students at Seattle's University of Washington return to campus this fall, they'll find a vibrant, new dining facility— dubbed 1101—that will house, among three other concepts, a Triple S station (read: soup, sandwiches and salads).

Chef Andrew Simmons is going for a made-to-order approach to the salads, but with just two choices offered daily—a Caesar variation plus a specialty, rotating salad that changes every two to three days. Simmons will start with a base recipe repertoire of 10 different rotational salads, but expects to continually add to the list. “We will be changing this all the time; it will never get old,” he states.

Simmons is excited about being able to bring the upscale concept to customers while firmly controlling costs. “Ease of production and product utilization will be great in this station,” he says. For instance, chicken remaining from the rotisserie station on campus is easily worked into a specialty salad the next day, perked up with some basil from the chefs' own onsite herb garden and homemade balsamic dressing. Still-fresh items left over from the Mexican concept can fold into tomorrow's specialty Mexican salad, as can won ton skins and Thai dressing for an Asian option.

“We can tailor the special to particular food trends, too,” Simmons notes. “For instance, we can have Wednesday be the high-protein salad, with salami and low-carb dressing. The key is that with regularlychanging, made-to-order salads, we can control the costs.”

By keeping daily choices simple, Simmons also expects to be able to move the line quickly. “If we've got eight people in line and they all want the Caesar salad, we'll make them all up together in the big mixing bowl and then portion out eight individual servings,” he explains. He plans to offer the salads mounded up on china plates for indoor dining; but is still working on finding the right take-out containers for to-go orders. Large salads will probably weigh about 12 ounces and be priced at $6.50; small, eightounce versions will most likely go for $3.95, depending upon the particular protein element.

Different approaches
It's not just tossed-to-order salad concepts enjoying sales boosts, however. Pre-packaged and marketed “Black Bowl” entrÈe salads at St. John Medical Center in Tulsa, OK, regularly sell out (even though they're the highest priced items in the cafeteria), resulting in increases in revenue as well as customer satisfaction scores for Director of Food & Nutrition Services Janet Potts., R.D., L.D.

Changing a typical salad bar into a “cute kiosk” format with updated equipment improved student perception and participation at Kentucky's Hardin County School District, according to Director of Child Nutrition Programs Janey Thornton. “The whole look of the salad bar has been changed to be a complete concept on its own,” she explains. “More kids are eating there because it's overall more appealing.”

So much excitement over salad! But what else is new—those mixed greens have done it again.