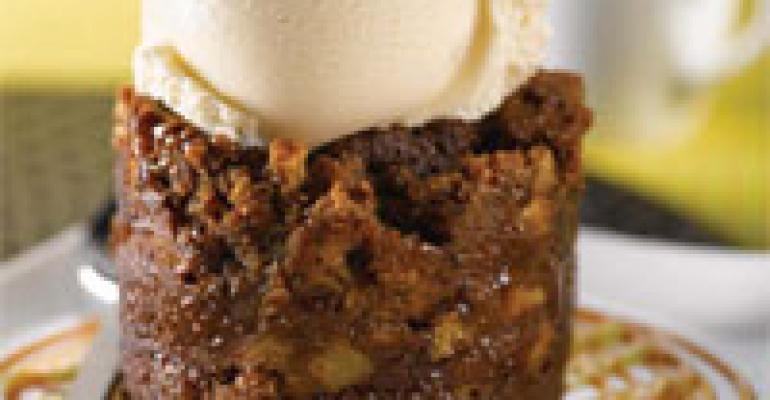 The salty and sweet flavor combo is trending big now for a reason: our palates crave the contrast! Think caramel with sea salt &#8230; chocolate with peanut butter &#8230; pretzels with vanilla ice cream.

The irresistible yin and yang of salty and sweet items can be found everywhere now. Chewy caramel morsels sprinkled with imported sea salt are offered in the trendiest candy boutiques, even as good old two-packs of peanut butter cups are waiting for you in the vending machine down the hall.

Rise of the ‘salt tooth’

A ‘salty’ member of the faculty being honored at Bennington College, Bennington, VT, was cause for the creation of a delicious cookie served at a recent dessert reception, recalls Executive Chef Art Amuso.

“The honoree really didn't like sweets, so we developed Sweet & Salty Pumpkin Seed Florentines,” Amuso says. “The pumpkin seeds and sea salt cuts through the sweetness, so we can serve this cookie at cocktail receptions as well, and the flavor won't clash with the beverages being served.”

The Florentines (chewy, candy-like cookies) are sprinkled with coarsely ground sea salt after they come out of the oven. At that point, they can either cool off flat or be shaped into little bowls or scoops that can serve as presentation pieces for a scoop of vanilla ice cream (see recipe).

All that and a bag of chips

Remember Bill Cosby, as Cliff Huxtable on “The Cosby Show,” crushing up potato chips onto his hoagie sandwiches? It's not just comedy anymore. Right now, onsite chefs across the country are doing the same thing…but with cookie dough and pound cakes.

Potato chips and other salty snacks can play a delicious, sinfully salty part in many desserts, either as a coating or incorporated right into batter.

“We expect to keep playing with the salty and sweet concept,” he predicts for the coming semester.

The strawberry shortcake — traditionally a pretty much “sweet-sweet” dessert — is going to get the salty-sweet treatment at Vanderbilt soon, Rawson says. He plans to put salty crushed potato chips into the shortcake mixture, “with the really sweet strawberries on top, and instead of sweetened whipped cream, I'll use yogurt or crème fraiche (a matured, thickened cream with a tangy, nutty flavor).”

That way, Rawson says, the composition of the strawberry shortcake will be: salty base, sweet topping, and then a more neutral topping, creating “more balance and more contrast at the same time,” he adds.

“You got chocolate in my peanut butter!”

In a cookbook put together by the Pasadena, TX, Association for School Nutrition, Peanut Butter Pie (see recipe) is featured along with Peanut Butter Balls and an Oatmeal Pie Crust that's a salty counterpoint to a pumpkin chiffon filling.

The Peanut Butter Balls are a super-simple treat with just four ingredients: creamy peanut butter, butter, confectioner's sugar and chocolate bark. Everything but the chocolate bark is creamed, rolled into balls and then dipped into the melted bark with a bit of the top exposed. In Ohio, this dessert is often referred to as “Buckeyes,” in honor of The Ohio State University mascot, Brutus Buckeye, and Ohio's state tree.

Salty and sweet treats that lean towards the savory side make for some nuanced flavors that will please a more adult contemporary crowd.

Complex flavors, such as figs and blue cheese, can be fairly simple to prepare — for an elegant dessert, or as a passed hors d'oeuvre in a catering setting. (See recipes for Fig Crème Brûlée with Blue Cheese and Honeyed Cantaloupe with Prosciutto and Blue Cheese)

Culinary history certainly points toward an enduring taste for savory sweets. Italian chef Iacopo Falai told The New York Times that he was inspired by a cookbook with recipes from Catherine de Medici.

“There I saw zuccotto (a Florentine confection made with vanilla semifreddo and chocolate chips) with candied fennel instead of chocolate chips,” Falai told the Times. “It was interesting, so I tried it.”

If this sounds a little too involved for everyday foodservice, remember that good old chocolate and peanut butter are just as much a part of this trend!

FM: You have been championing the idea of chefs adopting schools in their communities. What is a salty and sweet dessert that you'd recommend for K-12?

MS: Summertime berries in a rice pudding, a bread pudding or a panna cotta is a great dessert that doesn't cost a lot of money and can easily be made for a lot of people. You could even try some corn bread with a berry compote.

FM: What are some salty and sweet flavor combinations that you enjoy?

MS: A lot of great desserts are on the savory-sweet tip. Flavors like pineapple, ginger, and balsamic vinegar can all go together.

FM: You're opening a new restaurant soon in Harlem, Red Rooster, where you've said that you're going to draw from the rich African-American culture in that neighborhood. What's a dessert you'll be serving there?

See bacon paired with chocolate and nine other super-new dessert trends, including big-city macarons (not to be confused with macaroons), and amped up ice cream sandwiches on The Food Channel website. Go to http://www.foodchannel.com/stories/2693-top-10-dessert-trends-for-2010.