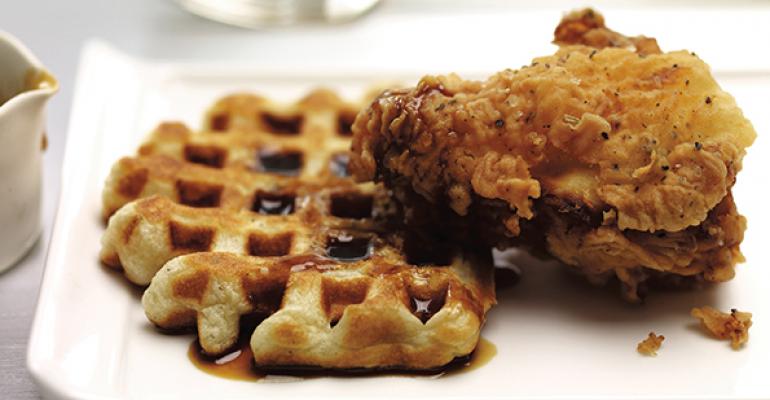 The Secret History of Chicken and Waffles

Going beyond the myths to the true story of the soul food staple.

Chefs love to riff on the staples of soul food. Chicken & waffles delivers an unforgettable arrangement of salty and sweet, crispy and soft, breakfast and dinner, day and night. But where did the iconic dish come from?

A quick Internet search yields the following “intel” on chicken & waffles: The dish originated in Jazz Age Harlem, in after-hours clubs where bleary-eyed jazz revelers would satisfy their hunger during the hours when it was way past dinnertime and too early for breakfast.

While that explains the after-party appeal of chicken & waffles, it’s not the whole story. Sure, the combination was found in Harlem in the 1920s and also in the Los Angeles soul food scene around the same time.

The true story of chicken & waffles is hundreds of years old and goes much deeper. The version of the dish most familiar to modern diners—and the exciting new places chefs are taking the dish now—is a product of evolution.

That’s not a Wikipedia entry. It comes directly from the man who literally wrote the book on soul food.

“You’ve come to the right place,” says Adrian Miller, culinary historian and author of “Soul Food: The Surprising Story of an American Cuisine,” which won the 2014 James Beard Foundation Book Award for Reference and Scholarship.

“I’m so tired of people perpetuating the myth that chicken & waffles came from Harlem because people were getting out of the clubs at 3 a.m.”

In fact, the story of chicken & waffles began centuries ago in Europe.
“In Germany, it was common to serve meat with something to soak it up,” Miller says. “When German immigrants came to this country—the Pennsylvania Dutch—they brought this dish with them.”

During the 1700s in places like Philadelphia, the humble country dish evolved into something a little fancy; it was served to crowds for church dinners, big social events and hotel soirees.

Once the dish traveled South, the bland, creamy Pennsylvania-Dutch chicken was replaced with crisp fried chicken.

“It was upscale. People would serve these gargantuan meals with the template of meat with bread. It could be catfish and pancakes or chicken and biscuits,” Miller says. “And enslaved cooks were doing the cooking, so that’s how the dish comes into African-American culture. In the late 1800s, black women would go to railroad stations and sell chicken and pancakes.”

Since fried chicken was made with young chickens, the dish was not an everyday thing until poultry became industrialized. Before then, older, stewed chicken meat was much more common, Miller says.

“But by the 1920s, chicken & waffles had fallen out of favor with wealthy white society,” he adds. This brings us to the appearance of chicken & waffles in Jazz Age Harlem in clubs like Wells’ and as a staple in soul food restaurants like the famous Roscoe’s House of Chicken & Waffles in LA. What came next, Miller considers to be a mystery.

“What I can’t figure out is this: Chicken & waffles persists in black society for 80 years, and then in the late 1990s, it began to explode with chefs all over the country,” he says. “Why did it go mainstream?”

There are a few good reasons, starting with textures and flavors.
“I really dig it when something can appeal to more than just one or two of my taste buds,” says Antonio Alano, a chef from the West Coast currently living in North Carolina.

He introduced chicken & waffles to the Raleigh campus of WakeMed Health and Hospitals, where he’s chef of patient services. He’s a fan of off-the-beaten-path diners (“hidden treasures,” he calls them) and fell in love with chicken & waffles at Roscoe’s in Los Angeles.

LA to Raleigh
“It’s amazing. The waffles are crispy on the outside and fluffy on the inside. The syrup must be infused with cinnamon, but they don’t tell you that,” Alano says. That spiked syrup inspired him to add his own notes of flavor.

“Being in the South, everyone has their own way of making just the fried chicken,” he says. “So this is just my interpretation.”
The chicken & waffles at WakeMed’s café get a good drizzle of syrup that’s been simmered with a cinnamon stick, chiles d’arbol and a dried chipotle pepper.

Alano has been working on a more comfort food-centric patient dining menu at WakeMed, and he’s currently developing a version of chicken & waffles that patients can enjoy.

On the Road
Farther down South, the Ironsides Waffles truck serves both the Tulane University and Loyola University communities and can be found parked in different locations near the river bend in uptown New Orleans. The truck rolls along with fun, portable waffle items, and one of the most popular is chicken & waffles in the form of a wrap/sandwich with spicy chicken and cool coleslaw. It’s called the Sidekick.

“We almost undercook the waffle so it’s flexible enough to be a sandwich,” says Thomas Beckmann, CEC, general manager, Tulane University Dining.
Wherever chicken & waffles is found, from a church luncheon to a jazz club to a food truck or a dining hall, it’s a surefire way to evoke the legend that’s pure soul kitchen comfort, day or night or sometime in between. 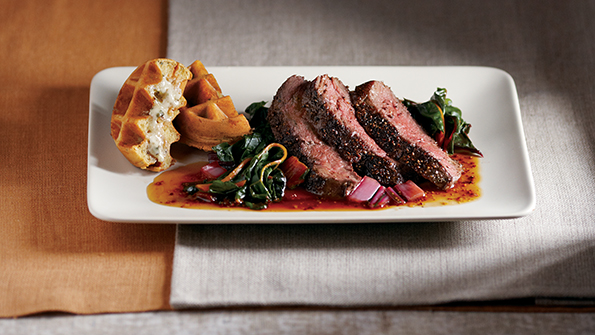 1. For the batter: Combine all batter ingredients. Mix together and refrigerate, covered.
2. For the demi-glace: In a saucepan, melt butter; add shallots and sauté until translucent. Add vinegar; simmer 4 minutes. Add demi-glace and bring to a boil. Whisk in mustard, reduce heat and simmer 3 minutes; season with salt and pepper.
3. For the steak: Per order: Season 1 steak with salt and pepper. Heat 1 tsp. oil in a sauté pan until hot. Add steak; sear on both sides until well browned. Place in a 500°F oven and cook to medium rare or desired doneness. Carve across grain into thick slices.
4. To assemble: Using a waffle iron outfitted with the mini waffle plate (4 per plate), ladle ¼ cup blue cheese waffle batter into 2 sections of the waffle iron and cook according to manufacturer’s direction. Remove waffles and immediately push in center of each waffle to create a small cup. Fill with 1oz. blue cheese and sandwich waffles together, making sure the waffle depressions line up. Place waffle sandwich back in waffle iron and cook 1 minute or until cheese is melted. Place 1 cup Swiss chard in center of plate; fan steak on top. Place waffle on top of steak; ladle demi-glace on and around steak and waffle.

Photo and recipe: The Beef Checkoff 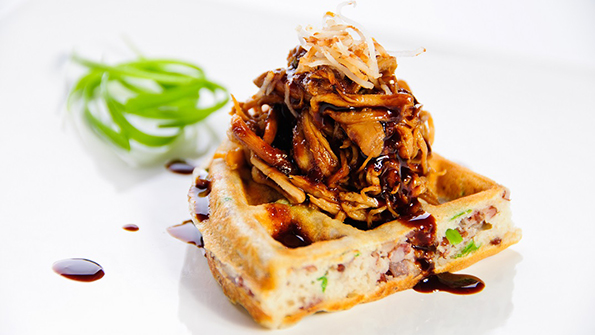 1. For the waffle batter: Rinse rice thoroughly; drain.
2. In a small pot, add olive oil. Saute garlic and ginger for about 2 minutes or until soft.
3. Add rice and chicken stock. Cover and simmer 15 minutes.
4. Stir in coconut milk and mix well. Remove from heat and stir in half of the scallion. Cover and chill in refrigerator or walk-in.
5. In a large mixing bowl, beat eggs until thick. Whisk in the milk, butter and vanilla.
6. In a separate bowl, combine the flour, baking powder and sugar; mix well.
7. Sift the dry ingredients into the egg mixture; mix well.
8. Stir in the chilled rice and refrigerate until service.
9. For the adobo chicken: combine the vinegar, soy sauce, garlic, pepper and bay leaves in a large pot; bring to a boil. Add the chicken thighs, skin side down. Return to a boil; reduce to simmer. Cover and simmer 15 minutes.
10. Flip the chicken thighs over and remove and discard skins.
11. Simmer the chicken and sauce for an additional 15 to 20 minutes or until the chicken is very tender and cooked through.
12. Remove the chicken from the pot; continue to simmer the sauce. Debone the thighs as soon as possible, reserving the pulled meat.
13. Once the sauce has reduced by half (yielding about 1½ cups), strain and hold for service.
14. To make the waffles at service, pour ¾ cup waffle batter into a hot, 7” waffle iron. Cook for 3 to 4 minutes or until lightly browned and cooked through. Repeat to yield 12 waffles.
15. Per order: Bring 2 oz. pulled chicken to heat and place in the center of a waffle. Drizzle 1 oz. adobo sauce over chicken and waffle. Garnish with 1 Tbsp. toasted coconut and 1 Tbsp. sliced scallion. 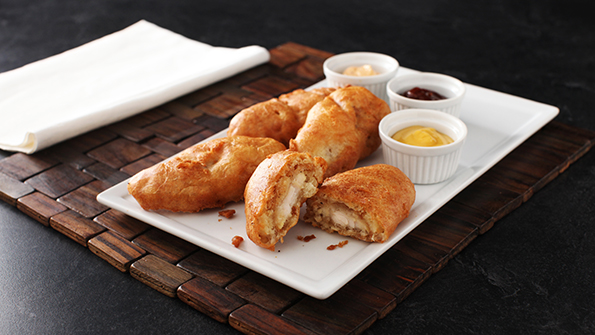 1. Fry frozen tenders in 350°F deep fryer for 6 minutes or until fully cooked. Drain.
2. Coat tenders in batter. Deep-fry for 3 min. or until golden brown.
3. Serve with barbecue sauce and dressing on the side. 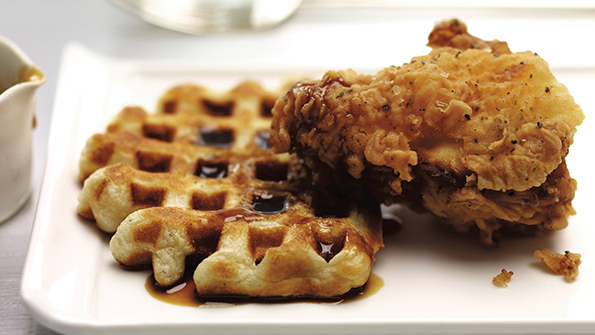 1. For the fried chicken: mix buttermilk and 1 tsp. of the sage in large bowl. Add chicken; turn to coat. Cover. Refrigerate 1 hour.
2. Mix flour, remaining 2 tsps. of sage, salt, pepper and red pepper in large bowl until well blended.
3. Heat oil in deep fryer to 325°F. Remove chicken from buttermilk mixture. Coat in seasoned flour. Once all of the chicken has been coated, coat again in seasoned flour. Add chicken in batches to hot oil. Fry 10 to 12 minutes per side or until cooked through and golden brown. Drain and keep warm.
4. For the Molasses-Cider Syrup: Bring cider, molasses and brown sugar to simmer in small saucepan on medium heat. Remove from heat. Stir in butter and vanilla. Keep warm.
5. For the waffles: prepare pancake and waffle mix as directed on package for waffles, adding sage to the batter.

Photo and recipe: McCormick for Chefs