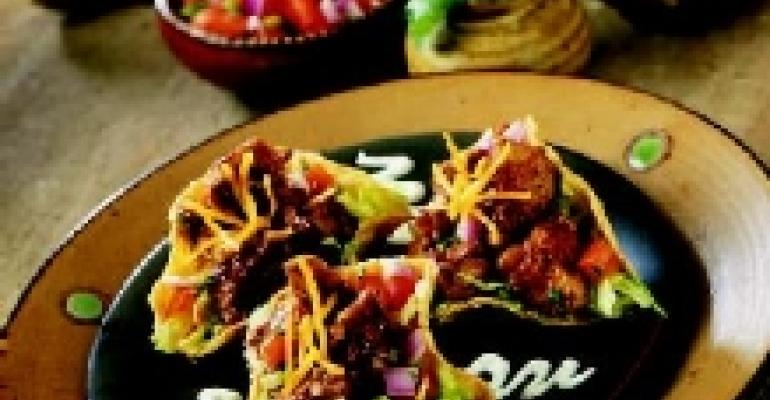 GLOBAL CULINARY INFLUENCES continue to stimulate the American palate and the imagination of chefs and operators in exciting new ways. Seafood is often the perfect canvas to display many of the bold flavors, ingredients and techniques being imported today.

Improved harvesting and sustainable fishing practices, the growth of aquaculture and higher-quality frozen and value-added products are also making it easier than ever to menu fish in all its forms. That lets the operator focus on producing creative, cost-effective and marketable menu items, like the six great ideas FM presents right here.

"We offer a fish dish daily for faculty and staff," says Derkhising. "One dish that simply flew out the door was a seared halibut on top of a wonderful Asian salad of raw cabbage, onions, ginger and cilantro. A couple of bottled dressings accompanied the approximately five ounces of fish and greens. And at $7 it's a real deal for an upscale, healthy dish.

"Salmon, halibut, cod, scallops and trout are very popular here," adds Derkhising. "And we've started using rice oil; it's great for deep frying and it's lighter than some of the other oils available."

2. Belly up to the bar. Seafood is certainly flourishing on menus in the Midwest, if the operation at Memorial Medical Center in Springfield, IL is any indication. Becky Morrow, chef in the foods and nutrition department, serves seafood several times a week, and offers a seafood bar once a month where the fish is sold by weight. Some of the more globally-influenced seafood dishes she offers include a seafood ravioli with a creamy dill sauce, a blackened catfish with a Caribbean flavor and the popular Grilled Tilapia with Pineapple Salsa (see recipe, p. 56).

3. Ride the sushi wave. "Sushi has moved into the mainstream as a menu item," declares Carl Citron, district manager, Sodexho Campus Services, Babson College , Wellesley, MA. While one might reason that the college's substantial foreign student population (23 percent) could account for sushi's popularity, Citron maintains that the concept is just as popular at some of Sodexho's other northeastern university accounts with a more domestic student base, including Bentley College, Roger Williams' University, UMass Boston and MIT.

In partnership with AFC Sushi and its SouthernTsunami concept, Sodexho's Babson College outpost boasts a stable of full-time sushi chefs who prepare authentic dishes both on demand and for grab-and-go and the school's catering operation.

From California rolls to eel, shrimp and salmon, it's all prepared fresh on premise. Dollar volume ranges from $800 to $900 a day, reports Citron. The average check is from $4.15 to $9.50 for individual-sized pieces and custom platters. "We've also had a lot of success with salads featuring seafood and soba noodles.

"Sodexho tested the sushi concept at other locations across the country and it's been very successful," says Citron. "One of the things that makes it so popular is the authenticity of the people that work the station. They're all Asian with extensive prep experience.

"For a few years, we tried offering sushi from companies that would bring it in prepackaged for us and we just weren't comfortable with the level of quality," Citron continues. "We gave this relationship a shot—it was very successful here, and then Sodexho took it to other schools in the New England area."

4. Make creative use of old standbys. Catfish has come a long way from its low-down southern fried roots. "We use catfish quite a lot in some of our most prestigious foodservice facilities, including those at the House of Representatives and the Supreme Court," says Claude Broome, corporate chef, Guest Services , Fairfax, VA, which has many accounts with the U.S. government. "Farm-raised catfish is a wonderful, very clean product. With its neutral flavor, you can incorporate it into just about any kind of cuisine, which is really what I love about it."

For example, Broome offers Jamaican Catfish with Carambola Salsa (see recipe p.58) that he created with a Carribean flare in mind. "The catfish is so neutral that it lends itself to all kinds of European and Asian dishes as well. It can be breaded and flavored for piccatas and catfish parmesan, for example.

"In business dining we run foodservice operations for half a dozen or more large federal law firms that are very white collar with upwards of 500 lawyers and perhaps 1500 support personnel," says Broome. "For that clientele we'll create more upscale things.

"Spanish tapas are very trendy now in America. I've featured them for cocktail and heavy hors d'oeuvre get togethers. Quite a few of the more popular tapas are based around seafood—shrimp, scallops, anchovies, fish fillets, smoked salmon and tuna. The Spanish dish paella is also a great showcase for seafood."

According to Broome, some seafood is becoming more economical to the non-commercial operator, particularly the Asian imports. "Whereas domestically we'll pay $20 a pound for crabmeat, the product from Vietnam, Japan and other areas of the Orient is half the price. However, the quality can vary and I'm not sure of their standards," he cautions.

Seafood and internationally-themed meals complement each other and the merchandising can be fun and an outlet for creativity, notes Broome. For example, for a Caribbean-themed meal he organized, tables were decorated with sugar cane, sea urchins and iced-down seafood. It's a profitable partnership all around.

6. Dish up some global inspiration. From Asian to Mexican, Italian to Carribbean, take a culinary tour with FM as we present a selection of creative seafood recipes that reflect some of the international influences prevalent today.