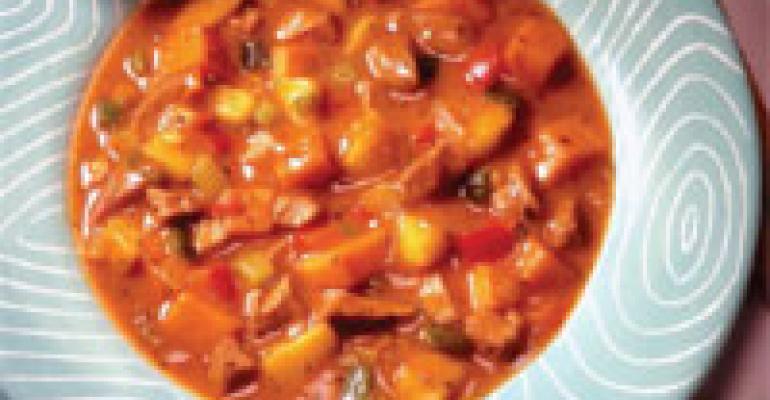 Fiery flavor profiles can help your soups excite and delight.

“Temperature-wise or spicy-wise?” is the question that nearly always follows the exclamation: “This soup is hot!”

In the case of this article, the answer is a resounding: “Both!”

Soup is extra special when it warms the soul not only with its steamy goodness, but also with strong punches of hot chili peppers, exotic spices and hot sauces.

“I think the thing about spicy soup that makes it so good is that it really gets your adrenaline and heart going,” says James Sanchez, executive chef/director of operations at Acenar, a San Antonio modern Tex-Mex restaurant, and a presenter at this year's Chef Culinary Conference at the University of Massachusetts.

Sanchez creates many spicy Mexican soups — with fiery flavor profiles — and has fond memories of spicy soups from growing up on the south side of San Antonio (see sidebar). He uses a few different dried chiles to heat things up, including ancho, pasilla, arbol, and guajillos (guajillos are sometimes called travieso, ‘mischevious,’ in reference to their not-so-playful sting, according to the Food Lover's Companion by Sharon Tyler Herbst).

“The heat can make you sweat, so that cools you down. It gives this euphoric feeling once the heat passes.”

If so, then there are plenty of euphoric students walking around the dining halls at the University of British Columbia, where a scorching selection of spicy soups regularly appears in the menu rotation, says Chef Steve Golob.

The fresh/tangy/hot flavors of Thai food crank up the heat in the Thai Coconut Rice Soup, which features contains edamame, lime leaf and cilantro. It gets a special kick from sambal, a Southeast Asian chili paste. It's a mixture of chilies, brown sugar and salt, and can also contain garlic, tamarind, and/or coconut milk.

Hot & Sour Soup, with a name that says it all, is also found on the menu at UBC. A staple of Chinese-American restaurants, Hot & Sour soup, a classic Szechuan recipe, calls for tofu, pork and dried mushrooms. It gets its signature flavor from sesame oil, vinegar, freshly ground white pepper, soy sauce and more.

According to Asian food authority Bruce Cost, the heat in Hot & Sour soup doesn't come from chiles; it's the freshly ground white pepper that brings the heat.

Pho is another iconic Asian soup that can be customized with different proteins. At the Ford Dining Court of Purdue University, West Lafayette, IN, customers “go through massive bowls of pho,” according to Barbara Maughmer, R.D.

Pho Bo (Beef) and Pho Ga (Chicken) are served in the school's all-you-care-to-eat operation, Maughmer says. Spicy Pho consists of broth over rice noodles in a bowl, topped with bean sprouts and thin-sliced meat, then garnished with green onions and cilantro.

The pho at Purdue is authentic, thanks to Chef Ha Tran, who is from Vietnam.

“She brought the pho to Ford as a featured item,” Maughmer says, adding, “She taught us to add a squeeze of lime juice over the soup and to add hoisin sauce. Some also add hot pepper sauce to it, but I pass on that option.”

That's another way to please more people with your spicy soups: offer the hottest components (sauces or pastes) as an add-on, so customers can choose just how much heat they can handle.

Some say the word ‘gumbo’ derives from the French interpretation of the West African name for ‘okra.’ Gumbos can contain seafood, chicken, spicy smoked sausage, turkey, beef, and/or vegetables in any combination.

At Emory University Hospital-Midtown, Atlanta, GA, gumbo is made with chicken in large quantities, with a cook-chill operation. The mellow heat of the gumbo is then served at four different locations in the hospital system, says Donnell Jones-Craven, food and beverage manager there.

Students enjoy gumbo made with turkey and turkey sausage that begins with a roux that's browned in the oven, builds flavor with Creole seasonings, and gets finished off with heat for the older grades with a little hot sauce or cayenne, “just enough to bring out the flavors; not to overpower them,” Jackson says, adding that “our participation soars” on gumbo days.

It's easy to warm up participation with spiced-up soup selections. Consider the following recipes to turn up the heat.

James Sanchez, executive chef/director of operations at Acenar Restaurant in San Antonio (and also a presenter at this year's UMass Chef Culinary Conference), talks about a few of his favorite spicy soups. Pozole Verde has roasted poblanos and stewed pork shoulder, along with hominy, tomatillos, spinach, cilantro and jalapenos. It's traditionally served at Christmas.

Black Bean Soup can be given heat with spicy chorizo sausage.