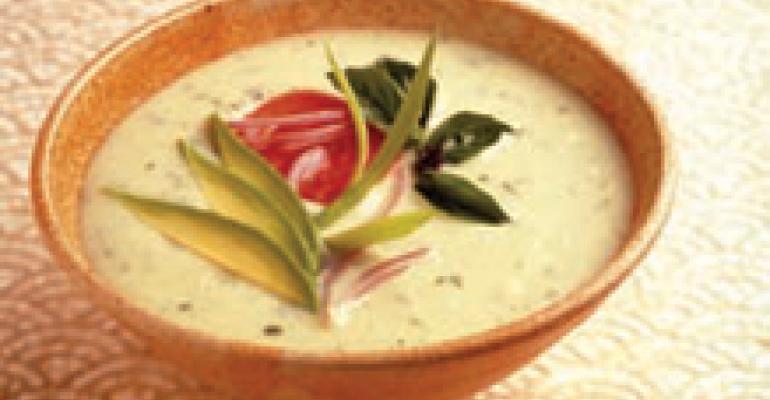 "You can't choose soups according to the lowest common denominator anymore," says Shawn LaPean, Director of Cal Dining at University of California, Berkeley. Even comfort food staples, like tomato soup served with grilled cheese, need a little edge for many of today's diners, according to LaPean. "Instead of generic cream of tomato, they prefer the flavor profile that a tomato basil version offers."

And standard chicken noodle soup? That's being challenged by lemongrass pho chicken broth, to which students can add their own noodles, chicken and vegetables at the pho bar.

"It's so popular," LaPean says, "we're seriously considering offering it for breakfast as well."

Surprising Favorites
At the University of Colorado at Boulder, the best-selling soup on the menu is an ethnic recipe, chock-full of spices, herbs and fresh produce.

"When we serve our Indian Chicken Curry soup, we normally go through double the amount as compared to the other three soups on the menu that day," says Robin Margolin, associate director for University Memorial Center Foodservice.

"It's time-consuming to make and has lots of ingredients, but it's all the rage. Our staff makes phone calls to let people know when it's being served, and we've even had retiring employees come in to spend time with our chef to learn how to make this soup before they leave."

Its appeal, Margolin believes, hinges on the "beautiful color and spicy, rich taste," attained through such pungent ingredients as curry powder, saffron and turmeric, garlic and ginger, jalapeños and cayenne pepper, plus onions, red and green peppers, eggplant, and ¯"for a twist"—apples. "It's really a complete meal in a dish," she adds

Ingredient-laden soups also get the most play at California's Madera Community Hospital, where Nutrition Resources Director Carrie Der Garabedian, MBA, RD, notes, "if there's not a ton of stuff in there, our customers won't buy it."

That's not to say that customers were ready to try it enmasse. "There was some hesitation initially," says Der Garabedian. "But we just kept putting it back on the menu, because it's such a good soup."

"We actively sampled it, and soon wordof-mouth spread. Now, it's a signature soup for us, and customers just love it."

Other hits include a pumpkin vegetable soup (which, unlike the more typical cream of pumpkin style, contains chunks of vegetables) and a two-potato vegetable soup, packed with both russets and sweet potatoes.

A sophisticated, cold pea-with-mint soup proved such an unexpected winner at Indiana's Purdue University that Retail Dining Chef Petra Norton added it to the catering menu.

"In the beginning, everyone was scared of it, but when they tried the sample cups we set out, they were surprised how good it was," she says. "It really beats cucumber as a flavorful cold soup."

Another unanticipated success has been the African peanut soup Norton first tested earlier this year. It's now "the newest vegetarian addiction" on campus, she notes.

"The kids won't eat regular pot pie, so I made it into a soup," he says of his Chicken Pot Pie soup that ranks among the top five favorites with students.

Another such inspiration is his Chicken Cordon Bleu soup, that sports chunks of chicken, ham, celery, and just-barely melted cubes of Swiss cheese. ("I add the cheese at the end, after the heat is off, so it just gets a little soft, but still maintains its shape.")

The Value of the Garnish
Although flavor-packed soups are a must for today's menus, they often need just a little something extra to seal the attraction and inspire extra sales. Garnishes can provide the perfect, final touch to transform a comforting or filling bowl of soup into a truly inviting meal presentation.

At Pocano Schools, for instance, Messarosh tops his chicken pot pie soup with crumbled pie crust to fully tie into the theme. Before serving the popular Indian Chicken Curry soup, U. of Colorado chefs swirl in some garam masala. At Madera Community Hospital, since the soups are all ladled out by staff and not on a self-serve bar, Der Garabedian can afford to dress up tortilla soup not only with crunchy tortilla strips and a sprig of cilantro, but also a dollop of guacamole, which significantly heightens the perceived value.

Bill Doyle, CEC, catering manager at Stryker Orthopedics in Mahwah, NJ, notes that he likes to serve his Ragin' Cajun Gumbo with jalapeño cheddar corn bread. Doyle bakes the batter in cast-iron molds that form corn stalk shapes, then wraps each "stalk" in a napkin and places one beside each bowl. For minestrone or other Italian-inspired soups, he creates fresh Parmesan bread sticks for the finishing effect.

"When you can include an appealing accompaniment like that with soups, they really go over gang busters with customers," he says.