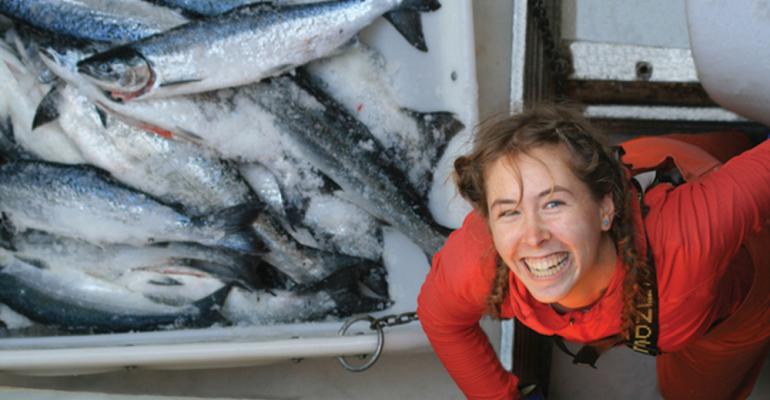 Geographically, Alaska is far removed from the rest of the country. But unfortunately, the 49th state is closer than ever to the standard American diet of processed junk food and soda.

The rate of diabetes and other lifestyle-related chronic illnesses has skyrocketed over the last decade among Alaska Natives and American Indians, two populations served by NMS (NANA Management Services).

NMS is a support services company that’s been in business since the oil pipeline days of the 1970s. Now, NMS is recognizing its opportunity to make positive dietary changes within the healthcare systems it serves.

The initiative makes use of the Traditional Foods Nourishment Act of 2013 and the Farm Bill of 2014, which have made it easier for public facilities in Alaska to receive and serve traditional ingredients like wild-caught salmon, reindeer, moose, herring eggs, seal, whale, sea asparagus, fiddlehead ferns and more.

“Folks are eating more junk food and veering away from traditional diets because it takes a lot of time and effort to go hunting or to forage,” says Melissa Chlupach, regional healthcare dietitian with NMS. “Elders are trying, and we are trying as healthcare providers and as a community, to keep these traditions going. There are too many other traditions that have gone away.”

Amy Foote, executive chef with NMS, is a regular at local gatherings of tribal elders who have welcomed her into their inner circle and shared old family recipes and tribal traditions that often make their way back to the medical center’s kitchen. The changes to the menu have been meaningful.

“Our menus had been about 30 percent traditional foods or at least with traditional ingredients, and now it’s more like 60 percent,” Foote says.

Room service menus regularly feature a variety of traditional dishes, from the familiar (Alaska wild-caught salmon) to those that are unfamiliar to most Americans on the mainland, such as reindeer rice and gravy, seal soup, fiddlehead fern pizza, Hatcher Pass salad, wild nettle smoked salmon pesto linguini and herring egg salad. (Click on items for recipes.)

“Herring eggs are like gold…they’re very coveted,” Foote says, describing tiny fish eggs that are harvested from hemlock branches, traditionally with plenty set aside to take to the elders in the community.

Gathering herring eggs is a community event, as is whaling: an incredible event to witness, with a festival atmosphere undercut with reverence for the animal. If you’re nowhere near Alaska, check out this YouTube video here.

With not enough herring eggs to put an item on the menu for any length of time, Foote instead created a herring egg salad for a one-day-only special at an NMS client center, which morphed into a full-on celebration: Herring Egg Day. She started with a leafy base of spinach and then added shredded carrots and radish, which she coated with a minimum amount of mayonnaise and lemon juice whisked together with salt and pepper. And yes, some portions were set aside for elders in the community.

To accommodate the uncertain nature of which traditional foods come in and when, Foote must often features special ingredients as one-day only events, often as a Tuesday Treat Day.

“It’s a fun thing we do for patients…sometimes it’s berries or other times it’s hooligan, an oily fish that’s kind of like smelt,” Foote says.

The emphasis on food’s healing properties is central to the Traditional Foods Initiative. A recent promotion focused on improving colon health with Alaska wild blueberries, which are known for their off-the-charts antioxidant level.

For a very nutrient-rich broth, Foote uses all the bones and heads from salmon and other fish.

On Seal Day (which, you guessed it, featured seal meat), “we served seal soup to our patients,” Amy says. “I went into someone’s room and that patient was in obvious pain and didn’t want to be bothered that day. But I watched that patient take one single bite of the seal and I saw them visibly relax, to really feel better.”