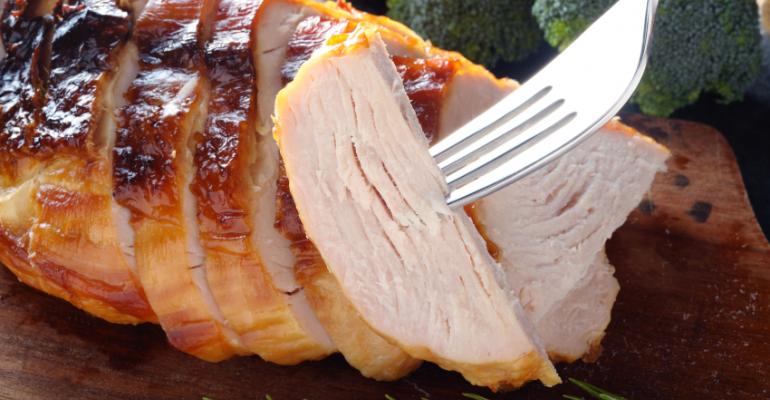 Turkey: A protein for every season

Brought to you by Perdue Foodservice

For many years, turkey was viewed chiefly as a holiday treat, served mostly as the culinary centerpiece during the Thanksgiving and Christmas seasons. But that is no longer the case. Today, thanks to its versatility, the big bird is available year-round in numerous preparations, particularly as chefs and restaurateurs explore new uses for it.

According to the National Turkey Federation, over the past 40 years turkey has been transformed from a single-product, holiday-centric business into an integrated industry with a varied product line. In 1970, about half of all turkey consumed in the U.S. took place during the holidays; by 2012, that figure had declined to 31 percent. During that same period, overall turkey consumption more than doubled to 16.0 lbs. per person, the NTF says.

Clearly, the foodservice industry can take some credit for that remarkable growth. Long a staple in sandwiches, turkey today can be found in diverse preparations shaped by multiple ethnic and culinary influences across all sectors of the industry.

Although sandwiches remain an important platform for turkey, consumers increasingly are finding it available in turkey burgers, turkey tacos, turkey pizza, turkey lasagna, turkey chili, turkey sausage, turkey salads, turkey wraps and turkey soups. At the same time, menu makers have found that turkey lends itself to a wide range of accompaniments, from traditional preparations such as gravy and stuffing to ethnic flavorings such as jerk spice or chipotle sauce.

Turkey is even emerging as the focus of multiunit growth, as evidenced by the six-unit Just Turkey in Chicago and the two-unit Simply Turkey & More in Camp Hill, Penn.

Turkey has become a favorite with many foodservice professionals because of its inherent versatility, many point out. “Turkey so easily takes on other flavors,” says Sara Bittorf, chief brand officer for 460-unit Boston Market in Denver. “It's mild in flavor, and it's hard to find someone who doesn't like it. It also lends itself to creating different flavors when combined with other ingredients. And it's a lean protein that's filling.”

Boston Market, which early in its development focused almost exclusively on chicken — the chain's original name was Boston Chicken — is an example of a brand that over the years has broadened its menu to incorporate turkey into the mix. These days, turkey is available at Boston Market in a variety of ways.

As an individual meal, slices of whole roasted, white meat turkey breast come with two sides and cornbread, a selection that accounts for 13 percent of all individual meal sales. In addition, turkey is available as a family meal accompanied by a variety of sides and sauces. It also is available in a turkey carver sandwich featuring hot turkey breast slices, and a turkey pot pie, served in many of Boston Market stores during the winter months.

One of the chain's newest menu additions, the Roasted Turkey Market Bowl — which allows patrons to choose their accompaniments — has performed better than anticipated since its debut in August 2012, Bittorf says. The bowl includes a choice of two sides topped with turkey and gravy or sauce.

Not surprisingly, the Thanksgiving Bowl with mashed potatoes, stuffing, turkey and gravy is very popular. However, diners can take the dish in a variety of directions with sides such as bacon mac and cheese, creamed spinach, garlic dill new potatoes, green beans, garlicky lemon spinach, squash casserole and a choice of sauces including poultry gravy, zesty barbecue, sweet thai chili garlic and honey habanero.

“People get to order what they want,” Bittorf says. “The market bowl is right on trend with people's desire to customize what they eat.”

In some stores, Boston Market is using its rotisserie ovens to prepare the turkey, although that is not spread across the system. “It's a wonderful way to cook, and it’s part of the DNA of the brand,” she says.

With the January launch of its newly revamped menu, Friendly's, a family dining chain based in Wilbraham, Mass., features turkey as a core item in its new strategy. Chief Executive John Maguire says the 350-unit chain retained dishes that already had “culinary credibility,” but jettisoned others in favor of three dozen new and thoroughly tested items as part of Friendly's extensive menu repositioning.

The tips are utilized in four ways. As an entrée, they are grilled and served with broccoli and rice pilaf and a choice of barbecue or teriyaki sauce. The dish is priced at $10.99 to $11.59.

Turkey tips also appear on the Friendly's kids' menu accompanied by broccoli, apple slices and honey-mustard sauce. In addition, kids can order a turkey sandwich on honey wheat Goldfish bread with lettuce and tomato and a side of apple slices.

While the revamped menu has only been in place for a short time, Maguire says the new turkey dishes are performing at the higher end of the brand's sales expectations. “They've resonated with our guests,” he says. “We believe turkey has a place on the menu … and we believe there are other areas for future line extensions, whether in soups or pot pies. Turkey is a very versatile protein.”