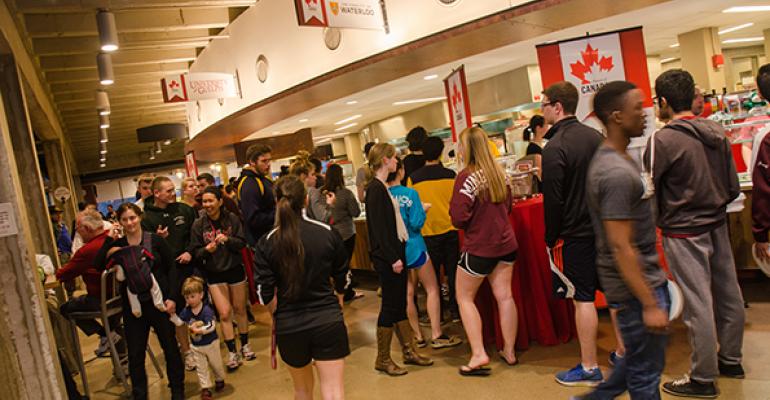 Proteins and produce from north of the border were highlighted by chefs from six Canadian universities at the fifth annual Flavours of Canada guest chef event at the University of Massachusetts (UMass) in Amherst this past spring, held in the school’s Hampshire Dining Commons.

“The Flavours of Canada event is a great opportunity to strengthen relations with our northerly neighbors, promote regional, sustainable and healthy cuisine and introduce Canadian culture to our student body,” says Ken Toong, executive director of auxiliary enterprises.

More than 3,000 students descended on Hampshire for the evening event, at which 35 entrees, salads, side dishes and desserts featuring ingredients from the provinces of Quebec, Ontario and Saskatchewan were dished out.

But perhaps the most popular of McGill's offerings was de Volpi's maple taffy on ice, a simple dish of maple syrup, reduced by more than half and poured in strips over shaved ice. To eat it, one dips a popsicle stick in one end of the maple syrup and rolls it around the stick, and de Volpi says he is always amazed by how well the treat goes over with the students.

"You would think with the university [of Massachusetts] being so close to Vermont, that the students would all know about this," he explains. "But they come over, wanting to know what this is, and they can't get enough of it."

"Camelia oil is similar to canola oil, but it has more omega 3's and has a higher smoke point," McFarland explains.

The four Ontario schools offered even more variety of proteins and vegetables. For example, Algonquin's team dished up ragout of pheasant served over bannock bread and pan-fried pickerel served over a roasted corn and wild rice succotash.

The University of Guelph offered up a turkey burger with candied bacon and jalapeno havarti, and a lentil and bean cake served with a roasted pepper and tomato sauce, among other items.

In addition to Canadian culinary specialties, the evening featured ice carvings created by Chef Ross Baisas from Montreal, and the opportunity for students to have their pictures taken with two Royal Canadian Mounted Police.