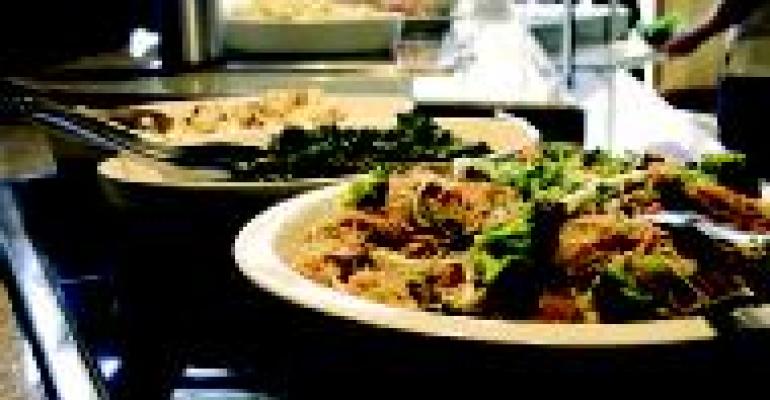 Maintaining viable vegetarian options has been a crucial part of onsite menu planning for decades now. More recently, as many operators have discovered, vegetarian fare and other " nonmeat" and "environmentally friendly" fare can be a springboard from which to gain certain side benefits, too.

From enlivening special theme dinners to cutting food costs, improving customer relations, and expanding flavors in the repertoire, vegetarian food offers a way to provide satisfaction to a particular patron segment and other health-oriented customers, while answering some operational concerns, as well.

Building on a theme
At the University of Connecticut last year, students from a campus advocacy group approached dining services to request that they switch from purchasing regular eggs to those produced from cage-free hens. According to Assistant Manager Rebecca Gorin, who sat in on the student meetings, their concerns soon blossomed into the idea for an Animal Friendly Dinner, which debuted in one dining hall to much acclaim last December.

With clever, redesigned "animal friendly" labels made to fit over the classic animal crackers cookie boxes, and whimsical posters, the dining department advertised the event widely, both to pull in all potential diners as well as warn off those who might want to eat elsewhere, where there was meat on the menu.

"I was concerned a lot of people wouldn't want to come, so we posted plenty of flyers well ahead of time," Gorin says.

But the special event attracted over 300 students, whose comment cards "were overwhelmingly positive, with many students urging us to do it again, and often," she adds.

The event proved to be not only a celebration of a variety of different vegetarian menu items, Gorin found, but also an opportunity to disseminate "sound nutrition advice" (a nutritionist manned an information booth), respond to and even elaborate on student requests, and offer a forum for certain student concerns (the animal rights group also hosted an information table). Gorin says plans are in the works to try and repeat the theme each semester now.

Cost efficiencies
Some days, customers of the cafeteria at the Ross School, a private middle and high school in East Hampton, NY, come in to find an entirely vegetarian menu at lunch.

Notes Executive Chef Beth Collins: "It was not really intentional to have some strictly vegetarian meals at first, but when we overhauled our menus in '04/'05, we were looking at ways to reduce food costs, and cutting out meat really does that."

Helped along by a school-wide philosophy that "educates students about the sustainability of plant-based diets," Collins explains that her audience was already well-versed in vegetarian choices.

"Eighty to ninety percent of the time, the pasta dishes are vegetarian; there's vegetable protein such as tofu or tempeh everyday; and plenty of dried bean and grain salads on the salad bar to combine into full protein. A lot of the kids here have latched onto eating tofu and really like it–but they tend to want it in addition to meat, not as a substitute. To me, that's overkill on protein."

So even though she still hears an occasional grumble on the all-vegetarian days (which occur about once every other week), Collins plans to stick with it for both the food costs savings and attitude adjustment benefits.

A common denominator
With well under 100 employees on staff at the Clifbar headquarters in Berkeley, CA, Office Manager Mary Kate Cunniff notes that setting up a company cafeteria is clearly not financially feasible. But because employees wanted another alternative to brown bagging or the gourmet-but-pricey foodstuffs readily available in the upscale shopping/ restaurant area surrounding the business, she needed another solution.

That turned out to be a vending machine leased from and stocked by Amy's Kitchen, a manufacturer of frozen, organic, vegetarian entrees.

"Although we have quite a few vegetarian employees, there are still many meat eaters here," Cunniff says. "But this was seen by all to be a healthy option, one everyone could enjoy."

Amy's Kitchen Business Development Director Joel Humphries explains that, in fact, "70 percent of our customers are non-vegetarians;they're just looking for a healthful meal." With price points ranging from $2.25 to $4.00, the vending machine at Clifbar offers vegetarian Indian entrees, burritos, enchiladas, pocket sandwiches, macaroni and cheese, pesto gnocchi and more. Employees swipe credit cards through the machine to retrieve meals, and heat them in the microwave in the break room.

"It doesn't come up as an issue that there's no meat option in the machine," says Cunniff. "Everyone has responded really well, and it's been a great help to have it, especially in bad weather, when no one wants to go out."

Veggie virtuosos
To infuse new ideas and flavors into vegetarian selections, Buffalo-based Delaware North Companies recently hosted a vegetarian conference for their chefs from park and resort locations, led by Chef Jean Montagard, author of several organic and vegetarian cookbooks and instructor at the Lycee Hotelier de Nice in France.

Explains Delaware North's Vice President of Food and Beverage Christian De Vos: "We find that vegetarian fare is often limited to salads, pasta or vegetables, rather than a focus on creative non-meat entrees that combine hearty protein, whole grains and unsaturated fat."

Through the conference, he notes, chefs learned three basic tenets of vegetarian food: bring in flavors with different and unusual spices and hearty vegetarian stocks; include plenty of texture on the plate; and pump up presentations with such things as molds and attractive garnishing.

Adds Colin Moody, executive chef at the Asilomar Conference Grounds in Pacific Grove, CA, who also attended the workshop: "Beyond the typical French vegetarian stock, which incorporates bouquet garni for flavor, we explored a Japanese-style stock that combines kombu (seaweed) with clovestudded onions, leeks, thyme, basil and other flavorings to produce a rich, almost meat-flavored stock. By layering flavors— cooking rice or beans in this stock, for instance, and then adding vegetables and other ingredients to the dish— you can add real depth and layers of flavors to the meal."

When looking for help in educating employees about vegetarian/vegan definitions and preparations, the foodservices at Syracuse University in New York brings in Nutrition Educator Julia Salomon, M.S., R.D., for twice-a-year, hands-on training sessions. "This is so when students ask if something is vegan, they don't get a 'huh?' for a response," she says.

But to give chefs some extra help with menu ideas, Sadler Dining Center Manager Debbie Griffo tapped the experts at VegAdvantage.com, a nonprofit organization set up to offer recipes, advice and even demonstrations. (The group is funded by food manufacturers and distributors.)

"They came in and did a training session with our chefs to help them prepare vegetarian entrees and introduce more variety," Griffo says. "It was a great way to get to work with some different vegetarian products and gain some new recipes."