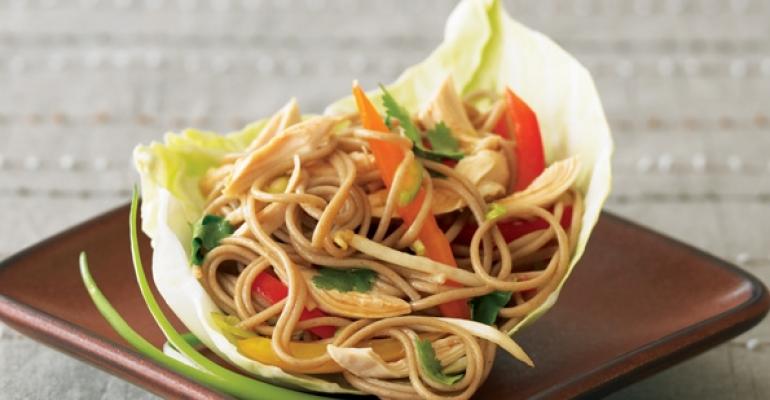 There was a time when all it took was soy sauce, ginger and maybe a can of water chestnuts to impress customers with your Asian cooking skills. That time has long since passed.

Having such items on hand makes it easy to create Asian dishes as the mood (or menu cycle) strikes.

Of course, more than just having them available, today's culinary staff are learning to put them to work to their full potential.

“Using staple Asian pantry items, you can get a really great flavor profile just by using the proteins and vegetables that you have,” says Todd Sweet, CEC, executive chef at the University of New Hampshire. “Having the right ingredients on hand will help you get to know the saltiness, bitterness and spiciness in so many Asian dishes.”

Building on the Basics

UNH's Chef Sweet relies on a classic Asian formula to get the flavor started on many dishes: GGS.

“Sizzling garlic, ginger and scallion with a little oil in a hot pan is a quick way to begin,” Sweet says. That combination is used often at the stir fry station in Holloway Commons, UNH’s main dining hall.

From there, Sweet, who pays regular visits to local Asian markets, likes to add sauces with complex blends of flavors. Oyster sauce, for example, gives simple stir fry "a more interesting flavor profile, but without starting from scratch."

Oyster sauce as a cooking ingredient can liven up not only stir fry station items, but noodle bowls as well.

“Use it just as you would use barbecue sauce,” he says. “Slather it on near the end of grilling. Its bold taste is great on salmon, too.”

The addition of rice vinegar to cold Southeast Asian salads and in ‘quick pickled’ vegetables “provides a clean acidity that brightens things up,” he says.

Miso, a tangy paste of fermented soybeans, has become a staple for chicken, fish and beef marinades in which Sweet combines miso, rice wine vinegar, oil, sugar and mirin (a rice wine similar to sake).

A miso dressing with ginger, sesame oil and shredded carrots can turn a plain garden salad into something much more. Miso is also key to have on hand for many Japanese-style miso soup recipes that can work very well in noodle stations.

Fermented ingredients like miso are a big part of Asian cooking, and fermentation is catching on as a major food trend in this country. In one popular seafood dish Sweet has develped, Swai (Vietnamese fish) Steamed with Ginger and Fermented Black Beans, the beans provide a distinct flavor.

Fermented black beans are often found in Chinese dishes and have a very salty taste. They’re commonly paired with other strong components, like garlic and chiles.

“We like to keep the basics of different Asian cuisines on hand,” says Eric Ernest, executive chef at the University of Southern California in Los Angeles. “It depends on the location, and the menu at some units changes on a daily basis.”

Korean food, which Ernest sees as the next big thing in Asian cuisine, calls for a lot of marinades for protein that will go on the grill.

“Marinades make the meats so much more interesting, and then the focus is on the meat. I wouldn’t make bulgogi (Korean marinated beef)  and then serve it with a dipping sauce,” Ernest says, adding that the perfect accompaniment would be kimchi, which is made in-house. “We're also thinking about experimenting with making Korean pickles.”

Ernest spent time working for a Japanese chef, where he gained an appreciation for nori, the dried seaweed sheets traditionally used to wrap sushi.

“It’s very high in glutamic acid, aka umami,” he says. Lately, he has used nori in a special ‘umami powder,’ which combines nori in powder form with shiitake mushroom powder, porcini powder and wakame (a dried sea vegetable). The powder is used to crust steaks, creating quite the umami intensity.

Another umami all-star ingredient is a staple of the Southeast Asian pantry: fish sauce.

It’s the major component of nuoc cham, a Vietnamese dipping sauce with lime juice, fish sauce, vinegar and sugar. Garlic and hot chiles can also be added in some versions. All at once, it’s sweet, salty, sour and spicy.

At several USC locations, instead of a generic 'noodle bar,' the station is more specific.

"We'll have a Pad Thai bar, with all the items that go with it: sprouts, crushed peanuts, and the sweet sauce that is Pad Thai's signature," Ernest says, "Or we'll do a ramen station."

While authenticity is always a focus, some noodle bars aren't strictly traditional in terms of ingredients. For example, a traditional Vietnamese noodle bowl would have less added to it, but a more American version might be loaded up with shredded carrots, mushrooms and lemongrass chicken.

And that's a good thing. With a wide selection of Asian ingredients, the chef can be as creative as he or she wants.

Asian Food: A Challenge for Healthcare?

Asian cuisine has the reputation of being high in sodium and overall not being healthful, especially in hospital and patient care.

"It's a big challenge because we are in the business of fighting the three evils: fat, calories and sodium," says Norbert Bomm, corporate executive chef, R&D, for Morrison Management, Senior Dining. He oversees menu planning for about 1,100 locations including healthcare and senior living.

Part of the problem with the perception of Asian food is the old school, overly sweet, often battered and fried Americanized version found in many Chinese takeout restaurants. 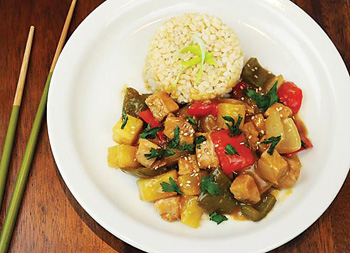 However, healthful dishes are attainable when healthcare chefs turn their focus to lighter, fresher Asian cuisines. For example, cold Thai salads packed with crisp, raw vegetables, noodles with a light broth, or lightened-up Chinese entrées, like Sweet and Sour Pork (above, right) which gets its sweetness from pineapple juice and its sourness/umami from reduced-sodium soy sauce.

"It's easy now to find reduced-sodium versions of many Asian sauces that you can keep in the pantry," Bomm says.

He developed a recipe for Filet of Tilapia with Mango Sweet Chili Sauce as a menu item that can be served with stir fry vegetables (it's pictured with green beans, but almost any fresh veggie would work), with noodles or rice. It has 393 calories, 502 mg of sodium and 6 grams of fat.

Another way to make Asian cuisine more healthful is to substitute brown rice for white. Obviously, some dishes demand sticky white rice as part of tradition, but for an item like a rice bowl, the substitution would work pretty seamlessly, and deliciously as well.