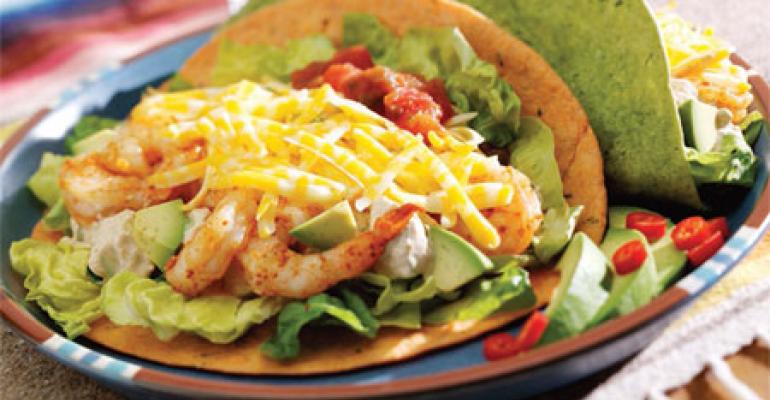 In many ways, the taco is a lot more fun than its bigger, heavier cousin, the burrito.

One advantage is size. The familiar Mexican staple is less of a “calorie commitment” than a burrito the size of your head. Instead of making a single decision, customers can order two or three at a time, each warm tortilla or crunchy shell stuffed with a different mix of meats, fish, grilled veggies, fresh salsas, sour cream, chiles, cheese, guacamole and more.

Also, tacos are perceived to be a great value. Lines form every day at taco stations with no sign of boredom, thanks to the endless filling possibilities.

Lately, chefs have been trying trendy taco fillings and toppers while keeping in mind that at the same time, familiar flavors are still a major part of the taco's appeal. Don't worry — pico de gallo's not going anywhere.

Classic promotions like ‘Taco Tuesday’ are tried and true — and always fun; it's a snap to take them a step further with attention-grabbing promotions that make any day a fiesta.

‘A different taco every day of the week’

Tacos are the “loss leader” at Swedish Medical Center, Seattle, WA, with regular customers showing up in droves every day for the variety and value, says Eric Eisenberg, executive chef.

“The taco station is like our own internal taco truck,” he says, describing the appeal of the filling selection.

“A customer could eat tacos five days a week and get a completely different experience each time,” Eisenberg says. “You could have pork and grilled onions one day…black beans and cheese the next…”

On all three of the Swedish Medical campuses, the taco station is far and away the most popular station, with the most volume, Eisenberg says. One employee runs the station, and backup comes in “if it gets really hot.”

The unbeatable value is one reason things heat up quickly at the taco station, Eisenberg says, breaking down what a customer gets for the wallet-friendly sum of $1.25 per taco: A 6-inch tortilla (customers choose between corn, flour, wheat or a crunchy shell) stuffed with the customer's choice of protein, including shredded chicken, shredded beef, carnitas (shredded pork), ground beef, red beans or black beans.

Scott Anderson, associate director/chef Shepherd University Dining Services, is in agreement about variety being the spice of life in terms of taco sales.

“Students love to change it up, and it doesn't ever have to be the same thing twice,” he says, describing pulled pork barbecue tacos and blackened haddock tacos as the basis for countless variations on a make-it-yourself station with several hot and cold wells filled with toppings.

Anderson likes to encourage the creative mingling of taco fillings, making sure salsas are stocked in the salad bar area at all times.

“It's always a free flowing mix,” he says.

Don't be afraid to experiment

Austin, TX, is a taco-culture epicenter. Follow the taco trucks that line the streets there, and you'll have a pretty good indicator of where tacos are headed next in terms of new flavors and delicious detours.

Chefs anywhere who are ready to start their own taco trends can easily join the fiesta, Mayberry says.

Start with a loosely composed taco blueprint: “some kind of protein; some type of salsa or sauce or chutney; cheese if appropriate; and something fresh and crunchy to balance the richness of the other ingredients.” The sky's the limit, he says.

Mayberry recently experimented with Korean barbecue flavors and mushrooms for a vegetarian taco that's out of this world. He started out with inspiration from taco truck godfather Roy Choi of the famed Korean Kogi BBQ truck in Los Angeles, another taco epicenter.

“I saw a presentation by Roy at the Culinary Institute of America at Greystone, and he's a real earthy guy, very cool,” Mayberry says.

For his own recipe, Mayberry began with a beef marinade rich with Korean flavors: a wild mix of tartness, sweetness, heat and fresh fruit juice.

The beef marinade was a great success, so Mayberry decided to try it with a vegetable taco. Mushrooms are meaty, but they cook very differently than meat.

“I seared strips of mushroom over really high heat, and I turned the marinade into a glaze to add to the mushrooms as they finished cooking,” Mayberry says. “So I had my bulgogi mushrooms. How would they fit into a taco?”

The mushrooms had a certain sweetness, so Mayberry sought to balance them with something with bite, like Korean kimchi (pickled vegetables). He developed a ‘fast kimchi slaw’ with shredded Napa cabbage, carrots, onions, and rice wine vinegar (see recipe p. 37). “I wanted a quick and dirty way to imitate the pickled flavor of kimchi.”

The mushroom bulgogi taco still needed more. Mayberry topped it with panela cheese, crumbly and mild, thinly sliced fresh jalapenos and a few sprigs of fresh cilantro. But he still wasn't done! Toasted sesame seeds complete the taco. “I was really happy with the flavors,” he concluded.