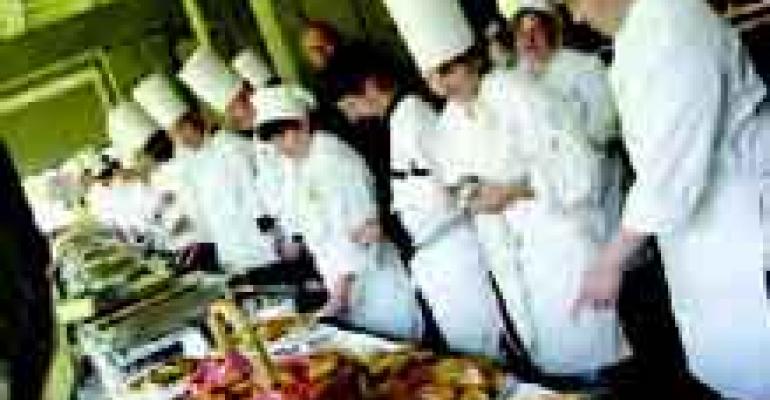 Ballpark Chef Specializes in the Exotic

Club chefs in modern sports venues are expected to pro-much more than the usual ballpark fare of hot dogs, burg-ers and nachos. Still, there are limits, especially in a good, solid, Middle-American city like Milwaukee.

So, what's with Andrew Tenaglia? Tenaglia is the executive chef at Milwaukee's Miller Park baseball park for foodservice management company Sportservice and he seems to delight in serving the exotic and the bizarre to guests in the ballpark's upscale 300 Club.

How exotic? Well, he has served a veritable bestiary of odd meats ranging from bear (for a Chicago Cubs series last year) and poussin (a tiny bird) to antelope, kangaroo and turtle. He's served whole sea urchins and abalone ("I like to scare people by serving them with the shells," he jokes). Really wild concoctions have included Skate Wing (a kind of manta ray) Au Gratin and House Cured Scandinavian Gravlax (salmon packed in salt and sugar and buried—"graved"— for a few days in the earth).

Of course, sourcing such oddities can be difficult, but Tenaglia says he's been able to develop a reliable network of suppliers. As for the dishes, he simply says, "I love cooking."

"Our business is about 85-percent buffet-driven," he adds. "I like having something different on a buffet line where people can sample it without committing to a full portion."

Indeed, it would be a mis-take to assume that Tenaglia's menus are mere collections of the weird. In fact, most selections are fairly recognizable. For instance, for a June date with the Seattle Mariners in town, he offered Tarragon Braised Canadian Rabbit, but the menu also had Roasted Loin of Pork With Washington State Morel Mushrooms, Prime Rib of Beef with Horseradish Crust, Mustard Rubbed Crown of Turkey and Mushroom Ravioli.