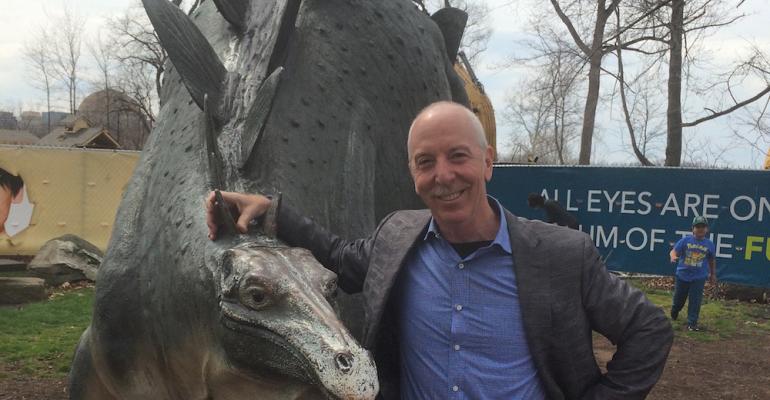 Zack Bruell brings fresh, flavorful food to the Cleveland Museum of Natural History and plans for the building’s expansion.

The millennial moms and dads who take their kids to marvel at dinosaur bones don’t want a museum snack bar that’s stuck in the Stone Age. When Cleveland chef and restaurateur Zack Bruell came on board a year ago to take over the foodservice operations at the Cleveland Museum of Natural History, the existing food wasn’t quite prehistoric, but it certainly wasn’t very modern, either.

Predictable, processed kids’ fare and packaged snacks like chips and soda were the main elements, and museum staff reported seeing parents making parking lot meals inside minivans with their own yogurt, fruit, drink boxes and healthier snacks for their children.

Recognizing the need to move quickly into the future when it comes to food options for families, museum management turned to Bruell, who is known around Cleveland as the hardworking chef behind successful upscale restaurants like Parallax, Cowell & Hubbard and Chinato, a casual walk-up burger place called Dynomite and a B&I dining operation, Kafeteria. He also runs a catering business and is consulting on a menu for Cleveland’s new Hilton hotel.

Bruell envisioned the new menu at the museum's Exploration restaurant to be a scaled-down version of the globally inspired lunchtime fare served at Kafeteria, where city office workers in the 925 Building, a skyscraper downtown, are finding good, well-priced lunch options. The focus there, as in all of Bruell’s concepts, is on great quality no matter the price point.

“What we do here now is more real food for kids,” he says. “We’re not opening cans.  We give people options.”

“I’m never going to compromise,” he adds, alluding to his guiding philosophy in the restaurant business. “You can use fresh herbs and the best ingredients possible and that’s our mindset.”
Bruell’s catering company provides all the catering that takes place in the museum, such as a recent themed dinner that celebrated poisonous plants throughout history, complete with a menu that riffed on that idea.

Bruell grew up on Cleveland’s east side, so he takes special pride in a project like the museum, which is located in the middle of the east side’s bustling center of education, medicine and art, University Circle.

“University Circle is the fastest growing and most vibrant neighborhood, and it’s making Cleveland better,” Bruell says, adding that he has memories of coming to the museum as a kid, and of his own children climbing on “Steggie,” the giant stegosaurus sculpture out front.

The museum’s current building went up in 1958, and it’s now undergoing the beginning phases of a major expansion, set to coincide with the centennial in 2020. Bruell kept that redesign in mind when he was redoing the existing kitchen and dining room for his operation.

“The new construction will include outdoor dining, and the café will have more visibility,” Bruell says. Currently, the dining area and kitchen are tucked away behind the front desk of the museum. Hopefully, gaining more visibility will lead to more traffic.

When he purchased new equipment to use in what’s now a temporary space, Bruell made sure it could all move over to the new location when the time comes, he says, adding that he’s looking forward to the future of food at the museum.