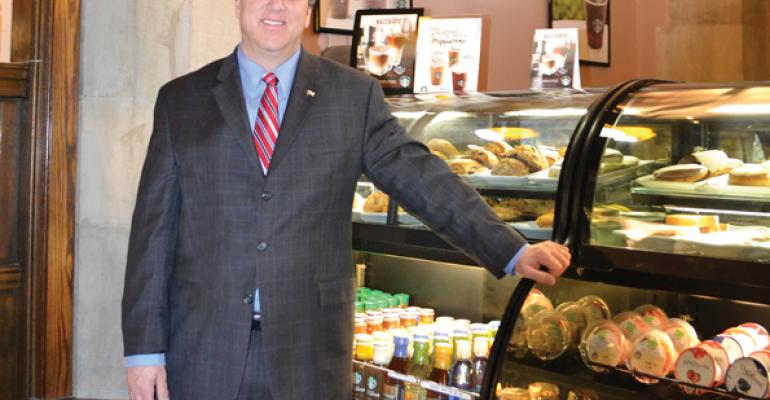 Established in 1802, the United States Military Academy at West Point, NY, is a place filled with tradition that must also embrace the modern and the cutting edge in order to turn out effective military officers.

The tradition/modernity dynamic also affects the dining program, where Kevin D’Onofrio has made his mark. In his more than 25 years as director of foodservice for the Academy’s Culinary Group, D’Onofrio has upgraded retail dining from a modest sidelight supporting the board dining program (a separate operation) into a trendy, customer-focused service in its own right.

Sales rocketed from less than $1 million annually when he took over in 1987 to nearly $9 million today. On the bottom line, an initial $60,000 annual deficit has morphed into a $1.4 million surplus over the same period.

In the past year alone, Culinary Group sales grew 25%, fed by menu and operational innovations at the department’s largest venue, Grant Hall, where they shot up from $3.8 million to $4.6 million.

This impressive record of success has now landed D’Onofrio the 2014 Silver Plate Award in the Specialty Foodservice category.

D’Onofrio has barely been anywhere else but the Academy. He grew up just outside West Point and started working in the Cadet Restaurant, precursor of today’s retail program, when he was 16, washing dishes and cleaning tables on weekends.

His first full-time job with the Academy was as catering manager starting in 1982, a role in which he did everything: “book, cook, serve and clean up,” as he terms it.

After a stint as assistant manager in the officers club, he took over as manager of the Cadet Restaurant operation (D’Onofrio eventally changed the name of the department to Culinary Group to reflect its new emphasis on food quality and operational professionalism).

At the time the department had four outlets. Today it has 10.

“I knew I needed to develop and grow the business when I took over,” D’Onofrio recalls. “There was a very underdeveloped market for retail services.”

A Market Ready for Retail

What he says he saw was a population of young adults, all full-time students living on campus and leading highly active lives. In other words, a market ready-made for retail food and beverage sales.

“Grant Hall was located right in the middle of where they lived and went to classes, yet was only doing about $25,000 in sales,” D’Onofrio remarks.

One of his first changes was to move packaged food and beverage products sold in the department’s c-store to Grant Hall, where they were much more accessible to cadets during their morning activities.

“They flew off the shelves,” D’Onofrio recalls. “Even though the cadets had breakfast they still wanted something between then and lunch.”

The Grant Hall operation is challenged by the feast-and-famine nature of its business, with students crowding into the venue in the short interludes between classes. To handle these rushes, D’Onofrio has turned to technology, installing a kiosk ordering system in 2010 for pizza, burgers, deli items and other offerings. It was followed by an online ordering option and will eventually be supplemented with a smartphone app for maximum utility.

D’Onofrio is also a big believer in the power of brands, both his own and established outside ones. The department’s All for the Corps slogan/logo is now on everything from pizza boxes to napkins, while a deal with Starbucks to bring the brand to campus has paid huge dividends. “We’re doing 10 times the sales we did before,” he says.

D’Onofrio also worked with Coca-Cola to bring a Freestyle fountain machine to West Point, making it one of only four Northeastern universities to have one.

Another area of opportunity is catering, which has quadrupled to some $1.6 million in annual sales. Concessions, primarily at the school’s Michie Stadium, generated $1.4 million last year. Michie, which can draw upwards of 40,000 for a home game, is ranked in the Top 10 U.S. Football Venues by ESPN.

With weather, game time and opponent all affecting attendance, “we never know how busy we’ll be until the game is actually taking place,” D’Onofrio says.

It’s a challenge, but one D’Onofrio and his team can confidently meet. He’s successfully met quite a few bigger ones already…