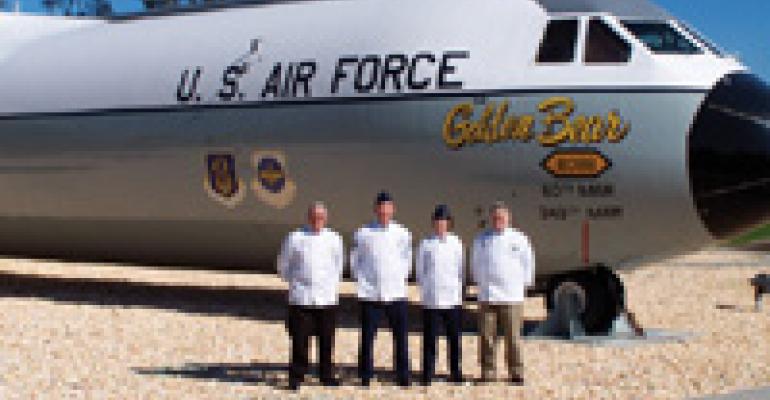 In 1956, John L. Hennessy, a respected hotel and restaurant executive with a long history of service to the military, felt that Air Force foodservice could be dramatically improved by establishing a working relationship with several leading foodservice industry associations. The awards program that resulted annually sends four "Travelers" to judge the Hennessy Awards competition. These come from the Society for Foodservice Management (SFM), the International Foodservice Executives Association (IFSEA), the National Restaurant Association (NRA), and the USAF. FM asked 2006 SFM Traveler Dick Hynes, Director of Consultant Services for Hobart-Traulsen to sum up his impressions of that non-stop, five-week experience...

Today, 50 years after the Hennessy Awards were first established, Air Force foodservice professionals see the annual trophy as very much the equivalent a Gold medal in the Olympics. And let me tell you, they pull out all the stops to win!

Our team began our training at Air Force Service Headquarters in San Antonio on January 28. Our task was to evaluate the foodservice operations of each of the bases nominated by the seven competing Air Force Commands. The Hennessy criteria is very specific and detailed. They cover over 48 categories for evaluation with 184 separate areas of focus, from the cleanliness of the restrooms to proper inventory procedures; from equipment maintenance to HACCP systems.

Let me tell you—you cannot travel with three other people whom you have never met before for almost five weeks and 29,000 miles, spending 18 hours a day with them, without either killing them or developing very strong relationships.Thank God it was the latter for our team. The experience has created life-time friendships among us all.

We began with a visit to nearby Randolph AFB, a training facility that teaches pilots to fly.

An average base evaluation would begin at 4:30 a.m., and would run all day long (if the operation had a midnight meal, evaluations would sometimes last until 1 a.m. the next morning—a very long day!) Most bases also had a facility on the Flight Line for serving Air Crews and maintenance personnel, and these were evaluated as well.

From Randolph, we traveled to Kirtland AFB in New Mexico (last year's Hennessy winner). We were greeted by a large contingent at the airport; our luggage was whisked away, and we were escorted by bus to the base, accompanied by fire engines and police cars, sirens screaming. There, a flamenco band played and dancers in traditional Spanish attire welcomed us. Even the gate guards (and understand, security is very tight at these bases) were dressed in chef's coats and hats, while sporting their M-16s. We had similar receptions at all of the bases.

From Kirtland, it was on to F.E. Warren AFB in Cheyenne, WY, the Missile Command's nominee. Not much flying going on there, but a very interesting place. It had quite a few hundred holes in the ground over several hundred square miles, with some pretty powerful weaponry in them.

From Warren, we traveled to Travis AFB in Vacaville, CA, a beautiful facility which primarily handles cargo planes and refueling tankers. We had the opportunity to be in both. They are just enormous planes, huge responsibilities for their pilots, who are just young men! The Golden Bear, the transport plane that brought our Viet Nam POWs home, was housed there and seeing it was a very special experience.

Next was a 10-1/2 hour flight to Yokota AFB about two hours outside of Tokyo. This base was the stop-over for most cargo going to the desert and there were planes coming and going at all hours. This was also the one base where we had two days off and were able to take day trips to Tokyo and Yokohama. Previously, I never had much interest in traveling to the Orient, but after meeting the wonderful people there I would go back in a heartbeat.

We next left on a VERY LONG flight to Langley AFB in Virginia, via Chicago. At Langley, we had a chance to see the new F-22 Stealth fighters, VERY impressive machines!

From Langley, it was on to Moron AFB, Spain, just north of Seville. This is a facility operated in conjunction with the Spanish Air Force. The dining operation was managed by a civilian contractor with military supervision and was very well run.

After 2-1/2 days in Spain we were ready for the long flight home, very tired, but pleased at a job well done. For me, this was the adventure of a lifetime: 29,000 miles in five weeks, and an opportunity to see things most Americans never get to see and tend to take for granted. Many times since I've been asked, "What was the one thing that stands out as most memorable about the trip—the planes, the weaponry, the facilities?"

For me, it was the people: some of the finest young men and women in the world, committed to defending our country. You become emotionally attached to these people in a very short time. Most of the bases we visited had 20 percent of their manpower deployed in the desert, with those remaining doing their work in addition to regular duties, with hours that are very long.

To an individual, every one that I spoke to was highly committed to what they were doing, and to doing it with smiles on their faces. It made me very proud to be an American. These Airmen are our heroes, my friends, in every sense of the word.