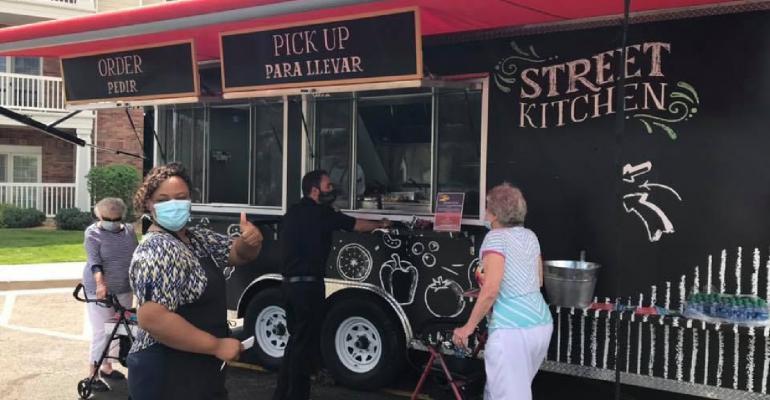 A little over a year ago, Duet Hospitality purchased a food truck for its four Colorado senior living communities. The idea: to give residents unique meal options and food-centered outdoor experiences. Duet is the branded partnership between Christian Living Communities, which runs the community, and Morrison Living, the culinary provider.

The food truck was popular from the start. But during the coronavirus pandemic, it’s taken on a new significance.

Marco Valadez, regional executive chef, says it’s “perfect that we had the food truck because we can move the residents out from quarantine, into an open area. Some residents were really getting tired of not being able to go out.”

The community fed residents expressly through room service at the height of the lockdown. Though they now offer restricted in-person dining that includes reservations, health screenings and limited seating, some residents still eat most of their meals away from groups.

Rachel Bell, director of communications at Morrison Living, says the food truck not only gives residents an excuse to get outside and engage with each other, it gives Duet “the versatility of being able to provide a new menu each time the truck rolls around.” They also use the truck at events for prospective residents and as a tool for recruiting young chefs.

The truck is scheduled at one facility or another about twice a month. Now that life has settled into a new rhythm at the community, Duet is open to scheduling events more often. They’ve found that it’s a respite for both residents and staff.

“They absolutely love it,” says James Kleiber, system director at Morrison Living. “They don’t want us to shut it down at all this winter if we can avoid it.” In fact, the truck will operate in all but the coldest months, when they’ll winterize it so the equipment doesn’t get damaged. Between events, they store the truck on-site at one of the communites.

The food truck functions just like any other venue. Meal payment depends on the level of service: meals are included for residents with all-inclusive care and operate on a declining balance for others. Staff and visiting family members pay for meals directly, as they would at any retail food truck.

Photo: The Duet Hospitality food truck came fully equipped and can fit up to five cooks for quick-paced operations.

Though Duet Hospitality researched options to purchase a new truck, they ended up purchasing a used one, already wrapped and fully equipped. (They’ll upgrade to a custom, branded wrap in the spring.) It came with a three-section sink, two reach-in coolers, one reach-in freezer, a roll-top deli case for food preparation and cold hold applications, a 48-inch flat-top griddle, two deep-fat fryers, a steam well, prep table space and shelving. For quick-paced operations, there’s room for as many as four or five cooks at once.

The Duet staff approaches menu creation for the food truck as they do for the other concepts at their facilities: a mix of traditional entrées and high-concept, special-diet options.

“You have to think of how to balance it out,” says Valadez, noting that residents are demanding a higher quality of food. “I’m doing items that are traditional comfort foods and then something a little bit more trendy. I try to balance those out and keep everyone happy.”

Communites that request a food truck event choose from a series of suggested menus. These include a Mediterranean street food concept with lamb shawarma or falafel pita with baklava for dessert; a Korean-Asian fusion menu with beer-braised bison tacos or crispy rainbow trout with chipotle peach purée over fry bread; or a Spanish-inspired menu with a choice between a bacon-wrapped hot dog with pico de gallo, avocado and lime crema or vegetarian taquitos with black beans and cumin-spiced sweet potatoes with an optional side of loaded jalapeño fries. They also have an ice cream truck concept that offers vanilla, chocolate, or cookies and cream with a variety of sauces and toppings.

But chefs can do their own thing, too. If they want to come up with their own menu, Kleiber says, “the sky’s the limit.”

"Our goal is to continue to push the envelope, in any way that we can, to really be creative and bring that element of surprise and delight to the residents." He says. "We want to be more unique than anything we’ve ever seen in senior living.