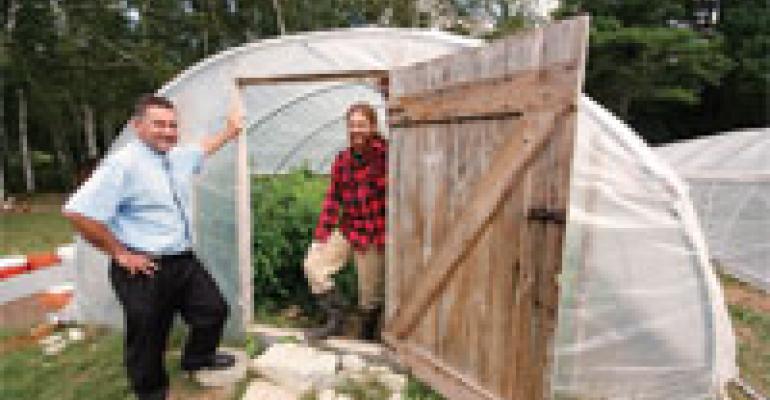 Back to the Land

St. Joseph's College has its own farm to meet some of its own sustainable dining needs.

Last November, the Maine chapter of the U.S. Green Building Council awarded Saint Joseph's College of Standish, ME, a special recognition award for its commitment to sustainability. The award was for “transformative action” in creating an organic farm that consolidates sustainable practices such as composting, recycling and waste reduction while educating students about the connection between what they eat and how food is grown.

The Pearson's Town Farming Project is a joint venture between dining services provider Bon Appétit Management Co., and Saint Joseph's to provide community outreach, education and food security. Its missions include providing food for the school's Café Bon Appetit dining hall, as well as to local farmers markets and Catherine's Cupboard, a food pantry co-sponsored by St. Joseph's and the town of Standish.

Pearson's offers a variety of internships tied to various academic majors, including business and environmental science, as well as to provide service learning opportunities and work study.

Located across from the main campus, it began in 2005 as an informal project managed by a recent St. Joseph's graduate using a small fraction of the 28 aces (the college originally bought the farm as an investment and it was being mostly unused at the time).

From there, the idea of serving product grown practically next door sparked interest in the campus community. Now, the farm grows crops such as tomatoes, peppers, squash, zucchini, greens, herbs, eggplant, corn and leeks on expanded acreage and in greenhouses and hoophouses to expand the growing season.

“We purchase food from the farm at a reasonable rate to give them revenues to help support it,” says Bon Appetit's general manager at the school, Stuart Leckie (the department also purchases from other local suppliers, Leckie adds). “We make sure we always have something in the café from the farm, even in the winter.”

Sometimes, that “something” is not vegetable, since the farm also raises animals. Last Thanksgiving, its flock of several dozen free-range turkeys made the ultimate sacrifice to sustainable eating at the student Thanksgiving dinner (the birds were processed in a licensed local facility).

“The lines were out the door,” Leckie reports.