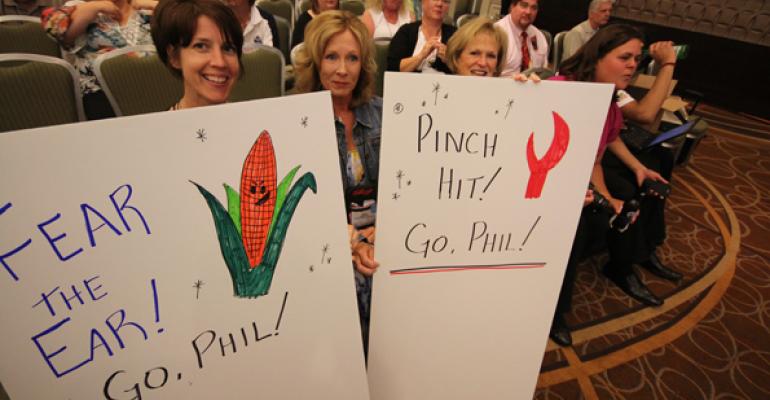 Fear the Ear: How a Last-Minute Substitute Took Home the Silver

A Concordia College chef steps up to save the Continental Region’s honor. 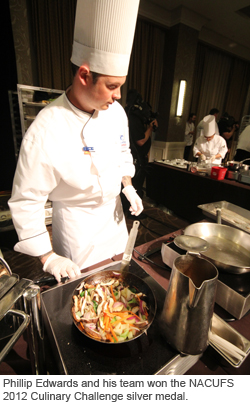 The story behind NACUFS 2012 Culinary Challenge silver medal winner Phillip Edwards sounds like the haywire plot of a reality cooking show. The original competitor from the Continental Region, Paul R. Houle of the University of Colorado-Boulder, had to rush home when he found out his wife had gone into labor one month early.

“At 2 p.m., the day before competition, he was on a plane home,” says event chair Jonna Anne.

Meanwhile, regional runner-up Edwards, who hadn’t made his competition dish since the original elimination heat months earlier, was pulled into the spotlight.

“You could only imagine this situation on a show like Top Chef,” Edwards says.

Twenty-four hours before the competition, Edwards had just attended the first day sessions and was “settling into Boston and having a slice of pizza near the harbor,” he says. His cell phone rang, and it was his boss, Janet Paul Rice.

“What are you doing?” Rice began, in a casual way. Soon, she delivered the kicker: he was being asked to stand in for the region at the annual Culinary Challenge. “How could I say no to something so exciting?” he recalls. “The line cook in me came to life.” 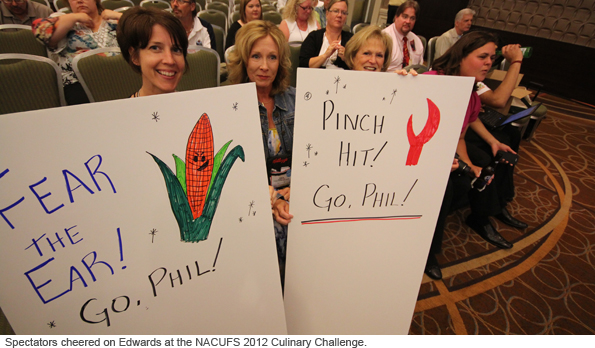 With help from his coworkers, the team from UC Boulder and vendors at the show, Edwards was able to pull together the 30 ingredients and 20 pieces of specialty equipment needed for his recipe, white miso glazed flounder with noodles and lemongrass consomme. He also took the constructive criticism he received in regionals and punched up the recipe so it would be fit for national competition.

One helper ventured into Boston’s Chinatown in search of lotus root—and found it. His wife, back home in Minnesota, sent his chef’s coat by overnight mail. It had been packed away in his basement, in a box marked “winter clothes,” as Edwards had figured he was done with it for awhile.

At the competition, Edwards felt as ready as he could be, and his team made signs and really rallied around Edwards to show their support.

“They were nothing short of totally supportive,” he says, adding that his cheering section was the loudest, winning a scholarship in his name from U.S. Foods. “We elevated the energy level in the room.”

Even though he lacked preparation time, Edwards’ flounder dish was good enough to win the silver medal. The next day, he wrote thank you notes to everyone who helped him during that frantic time before the competition.

Top College Chefs Compete Against the Clock, Other Regions
Jul 25, 2012