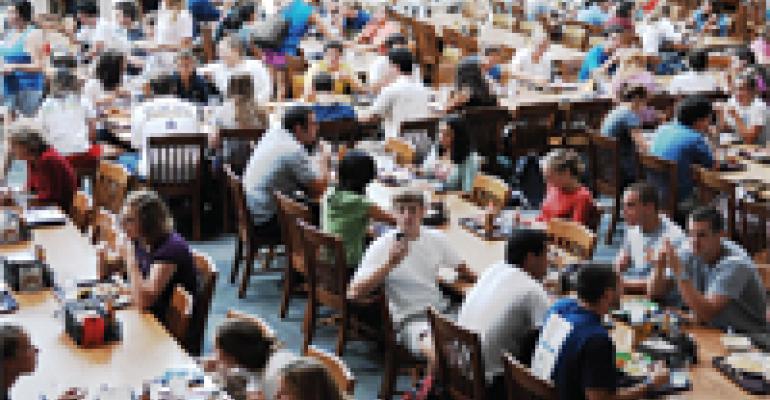 FM Innovator: Why Dining at Vandy Is Dandy

The dining program at Vanderbilt University in Nashville has historically been straitjacketed by the prevailing campus culture. All those retail-oriented students traditionally forced onsite dining to play backs-to-the-wall defense against dozens of just-off-campus restaurants trawling for student dining dollars. The result: a department focused almost exclusively on retail sales, c-stores and very little communal dining. Meal plans finally made the scene in the 90s, but were limited to dinner and required only for freshmen.

Today, however, meal plans are the norm at Vanderbilt, not the exception. True, they are now required for all students in their first three years, but the fact that the expanded requirement is a non-issue speaks volumes about how much more attractive eating on campus has become.

Rather than protesting his or her meal plan, today's Vanderbilt student is more likely to be upgrading it. One-third of third year students opt for a 14-meals-a-week plan even though they are only required to buy eight. Even a full two-thirds of the fourth-year students buy plans despite being under no mandate to do so for the first time in their college lives.

What has made meal plans so attractive? One answer certainly is the vastly improved dining options, especially the two-year-old Commons Dining Center and the just-opened Chef James Bistro (which won an FM Best Concept award this year — see the August issue). But also at work is the ingenious balancing act Vanderbilt Dining pulled off in designing its meal plans to accommodate choice while encouraging communality.

A Change in Priorities

Vanderbilt Dining's transformation from an a la carte free-for-all into today's more balanced program began more than a dozen years ago under former dining director Frank Gladu, now the assistant vice chancellor for business services. In 1997, Gladu oversaw the conversion of the main campus eatery, Rand Hall, from a traditional straight-line cafeteria into a multi-concept venue that mixed national and in-house branded concepts in a dynamic, edgy design. The department also began adding higher quality cooks and hiring chefs to boost the culinary component.

The intent was to “take Rand out of the 80s and into the 90s,” says Camp Howard, who is now director of dining but was at the time the campus' new executive chef. In the next few years, Howard was the point person developing new concepts for the new Rand incarnation in order to keep the eatery fresh, trendy and interesting.

Gladu had introduced Vanderbilt's first-ever board plan in 1991 and made it mandatory for all freshmen. It was a basic plan that offered an all-you-care-to-eat board dinner at Rand, a tentative first step to coax students to do more communal eating.

Things started to pick up with the renovation of Rand in 1997. The eatery, a branded a la carte retail environment called Two Avenues during the day, morphed each evening into an all-you-care-to-eat dining hall where meal plan holders could take dinner communally. The food wasn't quite the same retail-style fare offered during the day, but the arrangement was attractive enough that it generated a significant uptick in upperclass participation.

Breakfast and lunch meals were added to Vanderbilt's meal plan for the first time in 2003, expanding the plan's reach not only across the day but into locations outside Rand. In order to make lunch dining on the meal plan convenient, some half dozen retail locations were made eligible for the plan's cash component. The move proved especially popular with upperclassmen, and the midday crowds at the participating retail outlets soon forced Vanderbilt Dining to add prepared foods at its Varsity Market c-stores to the plan as well.

The catalyst for major change came with the prospect of a second “big box” dining hall to complement Rand, as the new Commons Dining Center was scheduled to open in fall 2008 as part of Vanderbilt's Residential College Initiative. A major goal pushing development of the Commons Center was the desire to entice more students to take meals communally, says Gladu. “Retail dining is not a good fit with community and a campus where more than half of sales are from c-stores does not really have a campus foodservice.” The Commons, hopefully, would help change that, but it also drove other changes in the program by necessity.

“We knew that in order to be able to operate the Commons Dining Center on a sound financial footing, we'd have to extend the meal plan requirement beyond dinner and beyond first-year students,” says Howard. “That would be a huge change for Vanderbilt students, so we also knew we had to go about it gradually.”

The strategy involved changing and extending the nature of the meal plan, and also extending the requirement to have a meal plan to upperclassmen for the first time, but doing it in stages.

The first step: change the meal plan to all-retail, ending the all-you-care-to-eat dinners at Rand (except for weekend brunches). Henceforth, meal plan dining at Vanderbilt would be an a la carte affair all day, with students using their meal plans to purchase meal components (entrée, two sides and a beverage) that together would constitute a meal purchase under the plan. (In addition, the plans would include a declining balance cash component to allow students to purchase extras and add-ons at all campus locations as needed.)

The really novel component of the new system, however, was making retail-pack items from the Varsity Market c-stores part of the meal plan. To do this, the department designated the individual-portion food items sold in the stores as either “entrée” or “side.”

Students could then purchase them in combination just as they purchased meals in the campus restaurants by selecting designated entrees and sides in combination. For instance, a student could go to one of the Varsity Markets (two of which are open 24 hours a day seven days a week) and buy a frozen mac-and-cheese dinner (entrée), an apple (side), a bag of chips (side) plus a beverage (or another side) to satisfy a meal purchase requirement.

The move was necessary, given the nature of the student population, says Howard. “We have always been very c-store oriented here, with frozen entrees being some of our best sellers,” he says. “With that kind of history, we figured that it would be illogical not to have the meal plans available in the stores.”

The next step was to expand mandatory meal plan participation. Rather than wait til the Commons opened, the department decided to kick off the new meal plan regime early, mandating that freshmen starting school in fall 2006 buy a newly expanded 19-meals-a-week plan. They were also told they would be the first class in the school's history to be under compulsory meal plan participation beyond their first year, being required to purchase a plan of at least eight meals a week in both their sophomore and junior years.

The next freshman class, whose enrollment coincided with a limited opening of the Commons, had their sophomore commitment upped to at least 14 meals a week, while the freshman class of 2009 were bumped to a first-year requirement of 21 meals a week.

The escalation boosted meal plan participation significantly as today, some 5,300 of Vanderbilt's 6,500 undergraduates are on some sort of meal plan.

To soften the blow for the increased mandates, Vanderbilt Dining has added a number of sweeteners. One was to designate four meal periods each day (breakfast, lunch, dinner and late night) to give freshmen more flexibility in using their mandatory 21 meals a week.

For upperclassmen, the meal requirements are designated by the week rather than daily (as with the freshman plan), giving them more flexibility on when to use their purchased meals. They also get the food cost portion (currently $3.10) of any missed meals rebated into their declining balance meal plan cash accounts each week, easing the pressure of having to use all their meals each week.

Of course, the major sweetener is the vastly upgraded campus dining mix, which makes getting food on the meal plan a pleasure instead of a compulsion. The Commons is perhaps the crown jewel of the program, but the retail outlets, as well as the remodeled Rand, all offer highly desirable dining alternatives to students.

As a capper, however, there is the Taste of Nashville, program, a component of the Vanderbilt meal plans that allows students to use their meal plan dollars at designated off-campus restaurants.

“We started Taste of Nashville when we initiated the sophomore meal plan requirement,” explains Howard. “We were concerned about capacity issues, especially at Rand because its the most popular lunch location on campus. Since students generally don't want to eat lunch and dinner at the same location, we came up with this crazy idea of incorporating an off-campus usage on the card, both as a release valve for capacity issues and to take the sting out of the meal plan requirement.

“It's become an excellent revenue stream, money we wouldn't get if the students were eating off campus on their own, something they do anyway. Meanwhile, the students like it because they can use their meal money off campus. It's really reduced objections about not having options.”