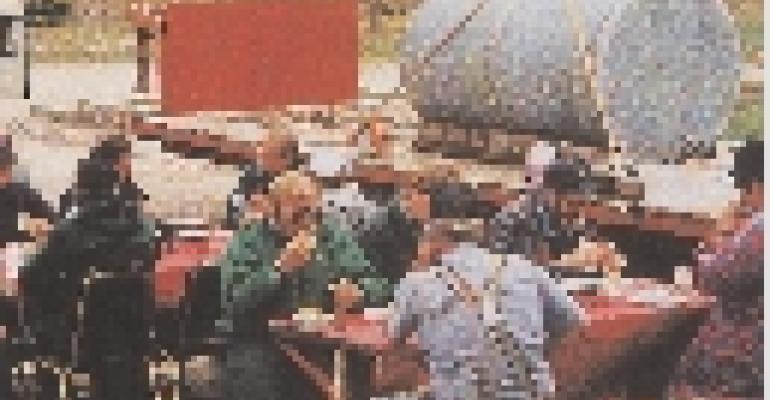 When the Red River swelled in late April, communities in North Dakota and Minnesota fell victim to mass devastation unprecedented in the Northern Plains.

Particularly in greater Grand-Forks, ND, many foodservice operations lost thousands of dollars worth of food, equipment and supplies as flood waters swept through their kitchens, storerooms and cafeterias, and as power outages spoiled many food inventories.

In the face of such adversity, FSDs aided in relief efforts by donating food to evacuee shelters, and by feeding both those forced from their homes by the floods and those emergency crews working among the communities' ruins.

3,000 sandwiches in 3 days
Typical of these directors was Dorrie DeHaan, area leader for the department of Food & Nutrition at the United Hospital in Grand Forks. DeHaan provided around-the-clock food-service to 200 employees working to evacuate patients when rising waters threatened the downtown neighborhood. Then, when the floods hit, she and her staff produced 3,000 sandwiches in a three day period for the emergency crews stationed nearby.

Similarlly when the floods forced the evacuation of the campus of the University of North Dakota, Grand Forks (UND) Dining Services Director Greg Teator and a few brave staff members stayed to feed the emergency crews who had set up an on-campus headquarters.

At Teator's operation, named the "Red Tag Diner" (for the ID tags worn by emergency personnel) workers ate in parking lots and in the campus' central food warehouse.

"We prepared a lot of heat-and-serve foods. We raided our freezers to do that, so they got what we tuypically serve our dining centers," says Teater.

On the Red River's opposite bank in East Grand Forks, MN, Patricia Leonard, foodservice director of the East Grand Forks Public Schools, assisted when the Red Cross and the National Guard set up headquarters in her district's senior high school.

"We were still feeding students, but prepared to serve 600 evacuees and emergency work-ers," says Leonard. "We fed the National Guard on Friday (April 18) night, then slept at the school because they told us we could-n't go home. We planned breakfast for Saturday, but at 4:00 a.m. they evacuated us."

Disaster planning reality check
All three directors had the fore-sight to prepare for the flood; each anticipated closed highways and ordered extra food in time to receive it before the floods hit.

Such advance preparations made it possible for Teator to feed emergency crews after the campus evacuation. But a complication arose when power outages threatened to ruin those same food supplies. To minimize losses, Teator donated $60,000 worth of frozen food to the Grand Forks Air Force Base, which fed 3,000 evacuees. "We had to act fast, but it was better than having to throw the food out," Teator notes.

The foodservice directors FM spoke to agreed that while all were braced for the emergency, no amount of planning could totally prepare them for the amount of devastation that actually occured.

"We try to anticipate all sorts of scenarios" in normal emergency preparedeness plans, says DeHaan. "But our worst case scenarios were never as bad as this."

Water everywhere, but nary a drop to drink
Ironically, a major complication was a lack of fresh water, as most water and sewer lines were cut off to the area. Teator had water delivered in tanks for both food preparation and for hand washing—more essential than ever as the bacteria-filled flood waters covered Grand Forks.

"Even when things look dry, they can still be dangerous. In that kind of environment, even a paper cut can lead to a dangerous infection," Teator observes.

A dike around United Hospital prevented flooding, but, says DeHaan, "Losing our water supply was more challenging than you could ever imagine. We used a lot of disposables." For hand cleansing, De Haan obtained supplies of bactterial hand wipes.

DeHaan also points to another weakness that was unexpected: her department had no plans in place to locate employees after the evacuation period was over. "We had never considered how we would contact employees after they'd been forced to leave their homes," she explains.

While trying to accept their own losses, FSDs also had the responsibility of managing similarly distraught employees. DeHaan says, "Those not needed here are helping with the cleanup elsewhere. It helps to focus on something besides the devastation.

"We'll rebuild and go on with life as usual," she adds. "We live in a hearty community, but it's going to be a long, hard summer."