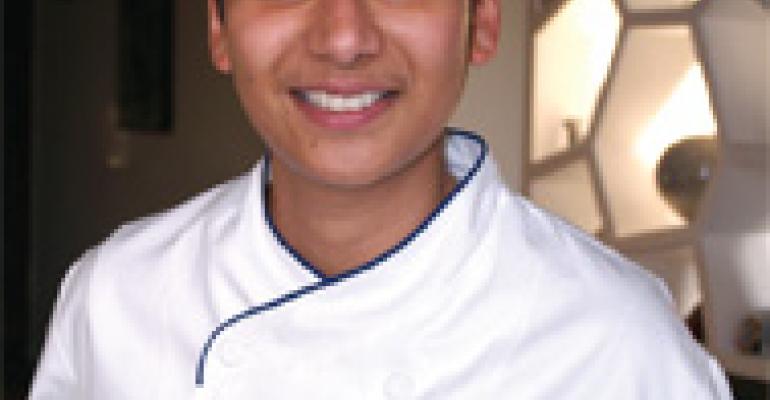 Onsite chefs are a relative rarity in the rapidly proliferating world of television cooking contests. Preeti Mistry, executive chef at Google's Mountain View, CA, headquarters for Bon Appetit Management Co., is one of the exceptions.

Mistry competed this past summer in the Bravo Channel's popular Top Chef program, and while she did not prevail, she did contribute to raising public awareness of onsite chefs as culinary talents.

Mistry is a chef who blossomed late. She had embarked on a career in film (ironically) before September 11, 2001, prompted a recalibration of personal priorities.

She enrolled in the Le Cordon Bleu in London and earned a Grande Diplome in Cuisine and Patisserie. She then returned to the U.S. to start her own catering company before joining Bon Appetit, first in the company's museum restaurants and now at Google.

At Google, Mistry manages Charlie's Café, one of the massive complex's 17 dining venues, as well as a vegan juice bar called Slice. She also oversees catering and pastry production for the entire complex. In all, she is responsible for a staff of more than 40, including over half a dozen chefs.

Did you do much cooking with your family growing up?

I was the youngest, so I did a lot of watching and eating but not a lot of cooking. Later, when I started cooking professionally, I went back and spent time with my mother learning some of the things she did. But I think the big thing was that we ate cooked-from-scratch, home made meals every night. I think that spurred my interest in cooking as soon as I left home and was left to my own devices.

What were some of your favorite dishes from that time?

There were a lot of bitter gourds and curries and things like that. I definitely loved okra dishes and a lot of the dishes that were spicy. One of the things I've been trying to make recently — over and over until I get it right — is a dish called khandvi, literally gram or chickpea flour, yogurt and water with a little chili that is cooked and spread onto a sheet really thin and rolled up. When we were kids we used to call them ‘carpet rolls.’ When it's done right it has the texture of a really silky pasta.

How did you get involved in Top Chef?

It was something a lot of people had mentioned to me in the past. Then Tracy des Jardins, the consulting chef at Acme Chophouse, where I was working at the time, mentioned it again. That was kind of the push I needed. But I didn't really think much more about it than, ‘Okay, I'll go and see what happens.’

Essentially, I went to an open call at a hotel restaurant and met with casting producers who asked us questions about our food, what we like, chefs we admire and things like that. Then they called me back the next day.

Did you seriously expect to be picked?

I've done some TV before, so I thought that might help me. I'm not a shy person, I'm comfortable in front of the camera. Basically, they told me that it's really a numbers game, that they want a diverse cast in terms of cooking styles, personalities, gender, etc.

Did you feel a special responsibility representing the onsite foodservice world?

Definitely. I know there haven't been too many chefs with a corporate foodservice background on these shows, so I did feel I was representing them. That being said, I wish I could have represented them a little longer…

When you have the cameras there, and with the high level of competition, it really is different. I didn't expect that. I remember trying to sauce a plate and my hand was shaking. I never imagined that something could throw me off my game like that.

Will you enter any more competitions?

Not anytime soon, but you never know what might happen in the future.

What's your advice for other chefs who might think of trying out for one of these shows?