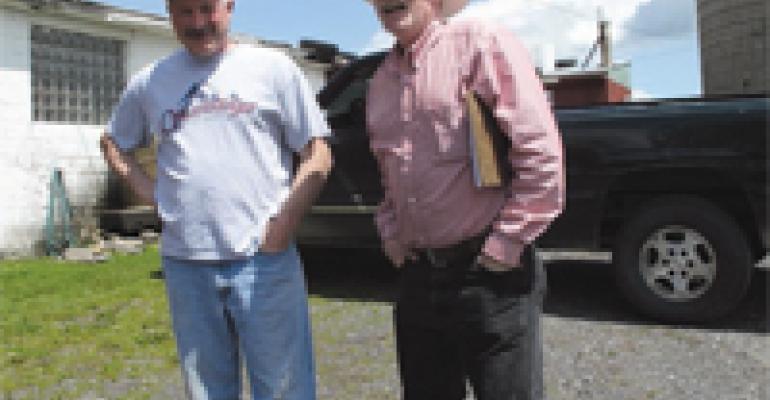 Cornell University buys whole heads of cattle from local farmers to supply some of its beef needs.

The cattle trail is a short one these days at Cornell University. Since spring break last March, the school has been sourcing most of the ground beef it serves in its five campus retail outlets from New York State farmers. The all-natural, grass-raised meat is processed in a USDA inspected facility in Troy, PA, about 25 miles south of the Cornell campus in Ithaca, NY.

But this is not simply another high-end burger meat purchase program. Cornell is actually buying full heads of cattle — an average of about three a week — and taking posession of all of the meat those cattle yield. That includes primal cuts as well as standard burger meat.

The rationale for purchasing whole cattle rather than just select cuts is that it helps support the local farmers raising the cattle. (Buying whole heads gives farmers a premium of about 17 cents a pound above the average conventional market price, according to a university release.)

Last spring, Cornell Dining purchased about 35,000 lbs. of local beef between March and June. The meat, about six animals worth delivered every two weeks, comes in 10-lb. bags, of both chubs and ground beef, plus the cuts like prime rib, strip steaks, tenderloins, short ribs and flanks.

“Other than those, we're pretty much grinding everything else into burgers,” says Gail Finan, director of Cornell Dining.

The primal cuts do pose a dilemma for the department, Finan says, because the high value cuts are not always easily used up. “We're trying to decide what to do with them. Should we grind them up? What we don't want is for them to sit in inventory for too long.”

She says that problem is a big reason why the program likely will remain limited for now. “I really am having trouble dealing with the prime ribs and the other primal cuts. If I had to take on any more, it would probably be a deal breaker,” she admits.

Of course, price is another concern. To accommodate the higher cost of the premium meat, the burgers in the retail operations where the local beef is used were downsized, from five ounces to four, with the price staying the same for now.

Finan credits Matt LeRoux, the agricultural marketing specialist for the Cornell Cooperative Extension, with bringing the beef purchase initiative to Cornell. “He had done this when he was in Vermont and wanted to see if we could do it here as a way of giving our program a unique marketing position.”

She says one of the biggest challenges in setting up the program was finding a processor willing to work with the university. “The company we're using now is very accommodating,” she says. “They give us the four-ounce burgers we need and cut the primals the way we want them.”

One of the more surprising things about the beef is its fat content, says Finan. Grass-fed beef is generally thought to be leaner than what comes from feedlots, but what Cornell is getting is in fact “on the cusp of being graded Prime,” she notes.

Students were prepped for the changeover with several taste test events, and signage at the retail dining outlets proclaim not only the taste virtues of the local product but also how they help support the local economy and promote sustainability.

Surprisingly, the burger downsize from five to four ounces in the retail outlets went over with nary a peep from customers.

“We got only two comments,” Finan says, “both from faculty members at different locations, and their complaint in both cases was that we changed the rolls!”