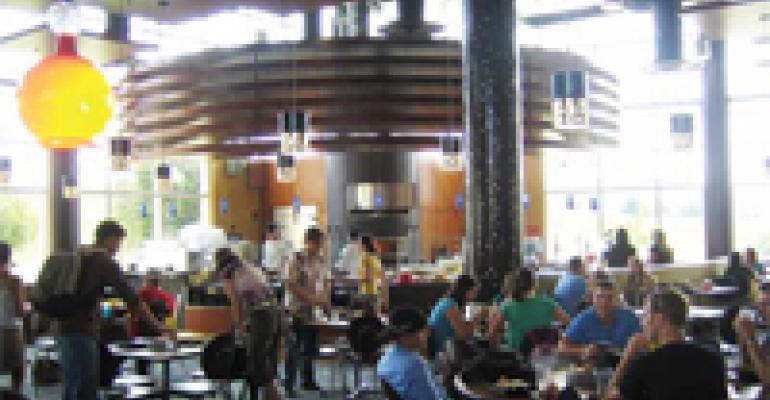 James Madison University has opened its newest dining venue, the East Campus Dining Hall. The $18.8 million structure is expected to become the first certified “green” building at the university once the U.S. Green Building Council verifies that it meets its Leadership in Energy and Environmental Design (LEED) standards.

JMU's dining services, which is managed by Aramark, has consistently been rated near the top of the Princeton Review's annual “Best Campus Food” rankings (see p. 13). It was number four in the most recent listing.

Construction on the 700-seat East Campus Dining Hall began in May 2008 and was completed in July 2009. It opened on August 17th.

Energy efficiency and sustainability are hallmarks of the building, which has retention ponds to filter dirt and pollutants out of runoff and energy-efficient kitchen equipment and cooling systems. Much of the building is lit from natural outside light while a white membrane covers most of the roof to reflect sunlight and conserve energy.

Other “green” features include dual-flush toilets, waterless urinals and ultra-low-flow lavatories and sinks that are expected to help save 182,000 gallons of water a year. The menu emphasizes local ingredients, with 15 percent coming from local farmers, a total expected to rise to 20 percent by the end of the 2009-10 school year.