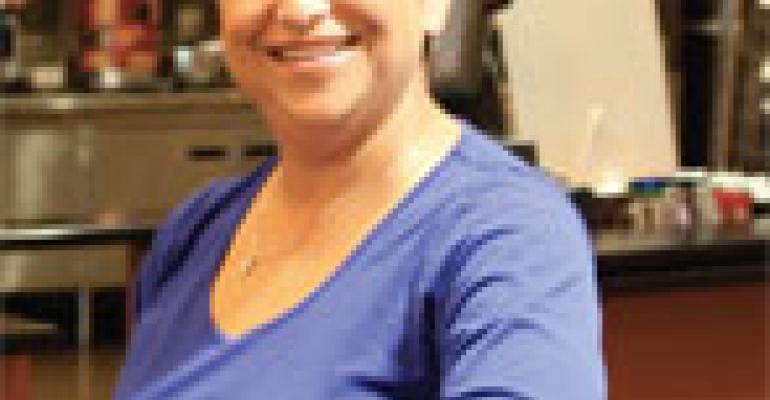 Lozano prepared for her current role in a career that included early experience with commercial foodservice before migrating to B&I in a job with the team at the legendary Food Works division of Motorola, Inc.

There, she melded her talents with those of an all star team of managers and now goes on to be the fourth figure from the Food Works team to be recognized with a Silver Plate award in the B&I/Foodservice Management category.

In the years since she moved on from Motorola, Lozano has had stints with Compass Group and, most recently, Dell.

After Compass acquired Food Works in 2001, she spent more than four years with the company, initially with a large San Antonio based account. There, as part of a large team, she concentrated on installing Compass' then-new Balanced Choices program, a nutritional boon to the 15,000 onsite employees there.

She then moved on to serve as a regional director for Compass, overseeing multiple B&I accounts in the South and Southwest before leaving to join Dell. There, she has taken up a position “on the other side,” serving as the liaison who oversees the management companies that operate dining services at her sites.

“When I joined Dell, we were out to bid with our largest account, which was in the U.S., and they wanted me to oversee that bid process and make sure we instilled effective standards and measurement criteria for whatever vendor we decided to go with,” she says.

Lozano's position at Dell is a challenging assignment, as she has to deal not only with different contractors in different operations, but populations coming from different cultures. To do that, she brought in new providers to facilities in the U.S. and Panama while establishing a strong relationship with the longtime vendor in Brazil.

The changes have facilitated development of a strong, customer-friendly wellness program across the system, an area of emphasis that has tapped a common interest among the various international sites.

Employee satisfaction surveys and sales figures show that Lozano is on the right track with this approach, even as she copes with head count reductions and building closures forced by the current economy.

“Our vendors have done a great job of really listening to the customers, looking at the surveys and then responding to them quickly to keep it new, keep it different,” she says. “I'm very proud of what they have done because in many cases they have actually increased participation in a very challenging environment.”

Lozano's current successes can be traced in part to a food-centric childhood in San Antonio filled with scratch-made Tex-Mex recipes and fresh, authentic ingredients. She sharpened that focus with several early career years with 1776, Inc., a San Antonio restaurant operator noted for its fresh ingredients and from-scratch approach

With Food Works, she started as a cafe manager at a small Motorola operation in Austin before working her way up through the ranks to become a district manager responsible for all six Motorola sites in Texas, serving some 12,000 meals a day 24-7.

Continue to next page.