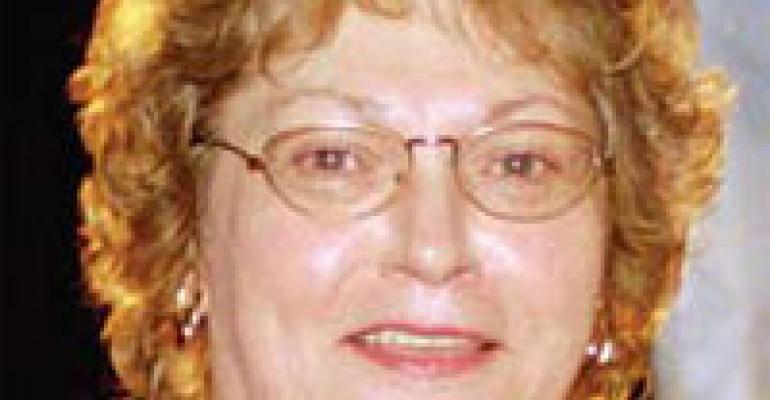 Mary F. Hofer, former publisher of Food Management, passed away suddenly on June 20 in her home outside Cleveland, OH. She was 60 years old, and died of natural causes.

Mary began her long association with the restaurant industry in May, 1978 when she joined FM's sales staff in Chicago. After selling advertising space for the magazine for several years, Mary was asked to move to New York to helm a new venture from FM's parent company, Harcourt Brace Jovanovich. She became publisher of Foodservice Technology International, a publication serving the emerging global foodservice equipment marketplace. FTI was groundbreaking in that each issue was printed in three languages: English, Spanish, and Chinese.

After FTI's successful launch, Mary was again promoted, this time returning to Chicago in 1982 to become FM's publisher. She served as its group vice president and chief executive until 1991. During that time, Mary oversaw FM during a period of significant growth, and helped orchestrate several acquisitions HBJ made in the foodservice magazine field. In 1985, Mary launched the Show Dailies to cover and serve both the National Restaurant (NRA) Show and the North American Food Equipment Manufacturers (NAFEM) Show. To help gain awareness for the Show Dailies, and to show appreciation for FM's sustained growth, Mary hosted the “Leaders of the Pack” party at the James R. Thompson Center in Chicago on Sunday evenings during the NRA Show. “Mary's party”, as it became known, was a must-attend dance party and food festival that attracted a Who's Who of the restaurant industry and featured entertainment from the likes of Chubby Checker and the Drifters.

After Mary left Food Management in 1991, she formed The Foodservice Leadership Group, an organization that brought restaurant-industry leaders together with specific manufacturers to help each gain a better understanding of each other's needs and capabilities. FLG is active to this day. In recent years, Mary was a principal at Integrated Marketing Technologies, a company specializing in database enhancement, digital asset management, and product sampling and evaluation.

Mary was intimately and actively involved in numerous associations and trade groups. She was one of the first members of the Women's Foodservice Forum and of the Society for Foodservice Management. She worked for and contributed tirelessly to silent auctions and fund-raising for associations and trade groups such as ASHFSA, NACUFS, SNA, HFM, SFM and others to help raise awareness and improve the financial standing of each.

Throughout her career, Mary Hofer's advice and counsel were sought by chief executive and assistant brand manager alike, and she treated each equally. It was that distinction that accounted for her incredible success and admiration throughout the entire restaurant industry.

Mary is survived by two daughters and numerous nieces and nephews.
--Gerald White