It is with much sadness that we report the unexpected passing of Mitchell E. Schechter, a long-time former staff editor of Food Management, on June 20. The cause of death was heart failure. Schechter was 60 years old. 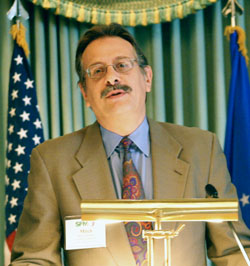 Management in 1983.  He specialized in covering the B&I sector and the management companies that dominated it, often providing wide-ranging insights during an era when that part of the industry underwent dramatic consolidation.

After leaving Food Management as senior editor, he formed PROSERVICE, a firm supplying design, editorial and other content-related services to foodservice clients. From 1998 through 2004, Mitch served as editor in chief of Foodservice Equipment & Supplies Magazine. He also published The Schechter Report, and Newz-Zoom, digital newsletters. In 2007, he joined forces with Bill Pagano to form Axis M Inc., a foodservice equipment marketing firm.

In addition, Mitch co-wrote "Foodservice Management: An Administrator's Guide," published by John Wiley & Co. (December 1994) and "The Complete Guide To Operating Foodservices In Cultural Institutions" (John Wiley, October 2001). He was also a contributing writer and editor to many industry publications, including FCSI’s The Consultant.

Considered a talented writer and editor and a dedicated, loyal friend, Mitch's contageous laugh could fill a room and brighten a conversation. He demonstrated great generosity and a courageous spirit. An active and committed philanthropist, Mitch contributed in many capacities to anti-hunger efforts and other causes.

He is survived by his parents his brother Joseph, sister-in-law Paula, and their children.

Memorial donations may be made to Feeding America (formerly, Second Harvest) at www.feedingamerica.org or to a charity of your choice.

[Photo: Schechter announcing a $10,000 donation raised on behalf of the Second Harvest Foundation]