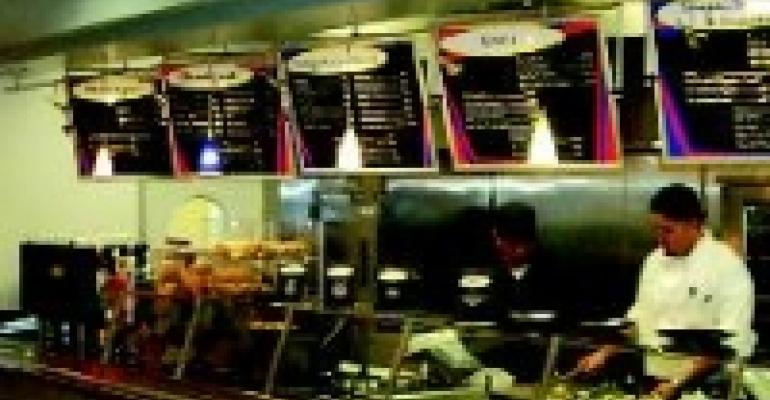 CulinArt's eighth acquisition in 10 years has made it a bi-coastal presence. The Lake Success, NYbased contract management company, which has extensive operations in the Northeast and New York markets, recently merged with P&A FoodSystems, a B&I specialist based in Santa Ana, CA, with 23 accounts in the Southern California market. Its annual revenues are around $12 million.

CulinArt CEO Joseph Pacifico says that with the P&A deal coming three quarters of the way through the company's current fiscal year, CulinArt will finish fiscal 2006 with around $110 million in revenues, making it one of the largest independent foodservice contractors in the industry.

P&A's clients include Oakley, Kyocera Wireless, Los Angeles County City Hall and Pacific Sunwear as well as the Los Angeles branch of the New York American Musical & Dramatic Academy and National University. The largest represent between three-quarters of a million and $1 million in annual sales but Pacifico declines to be more specific.

P&A founder/CEO Anthony Pecoraro will retire from the business, and P&A's operations will become CulinArt's new West Coast division under the direction of Anthony's son Steven, who will be the unit's president. His brothers Anthony and Robert will serve as vice president of operations and director of information systems, respectively.

FM caught up with Pacifico shortly after the deal was announced.

How much of a culture change will this involve for P&A?
"CulinArt and P&A are the products of the same environment. The founder of P&A, Tony Pecoraro, and I worked together in the 60s, so our companies have very similar values. Because CulinArt is older and larger, we have many more resources, although P&A's computer systems are actually more advanced than ours because they have put a lot of emphasis on that. Over time, we will implement the best practices of both companies."

Will you keep the P&A name in any way?
"We will sell new business under the CulinArt banner and look to transition existing business around the end of the year. Their salespeople are now already using CulinArt business cards."

Are the P&A contracts substantially different from what CulinArt writes?
"Most are management fee accounts and the contracts are similar to what Culinart already has."

Will the clients feel any changes?
"We've done this before and it's always very sensitive. Clients don't like surprises. To P&A's clients the transition will be seamless. Over time we will bring new and proven concepts to their operations, and resources that are out of the reach of a company of P&A's size. For example, we have a corporate dietitian on premise, as well as training programs and culinary groups."

What about menu differences?
"Being a Southern California company, P&A's menus are influenced by Asian, Mexican and South American cuisine. Our director of culinary development, Roger Beaulieu, will work with their chef's network to standardize and enhance these menu offerings. If practical, we will feature some on our menu cycle."

The West Coast is of course home territory to a couple of established high-end B&I management firms already...
"I know them well. Our job early on will be to bring the quality of service provided by P&A on the West Coast to the level provided by other high-end contractors.

"We expect to raise the bar in a more cost-efficient environment. This has been the impetus of our rapid growth in the Northeast, and if we do our job out West we'll get clients' attention. It's quite a large market for only two boutique players, so stay tuned. We don't expect to explode, but we expect to compete very well."

And what does the future hold for CulinArt going forward?
"We'll continue to acquire companies in our industry as opportunities present themselves. Be prepared for our ninth acquisition before the end of this year. And we expect to expand the geographic reach of P&A both north and east...when we're ready. Certainly, part of our phase 2 plan is to market to those areas. We are also looking for growth in the recreation and education segments.

"Today over 25 percent of our revenues are driven by recreational facilities and another 25 percent by education. We've also become quite a big catering company."