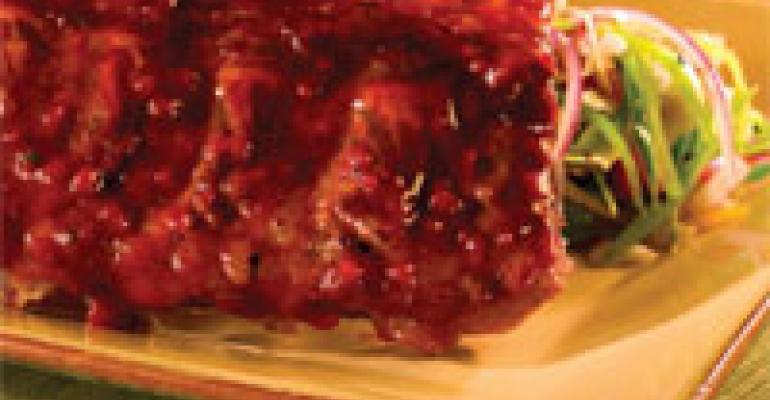 Korean barbecue's brazen juxtaposition of spicy, pungent and sweet makes an easy-to-cook sensory experience that is developing quite a following.

We aren't in Kansas City, or Memphis, or any other American barbecue capital, anymore. Instead, we're in Southern California, at the epicenter of one of America's latest and greatest food trends: Korean barbecue.

It started with Kogi Korean BBQ-To-Go, a retrofitted catering truck that rolled onto the streets of Los Angeles in November of 2008, peddling corn tortillas piled high with Korean-style barbecued short ribs garnished with onion, cilantro and a bunch of chili-soy-dressed lettuce.

Two years later, Korean barbecue has made its way to many other corners of the country and can be found on menus from Standish, ME, to Austin, TX, to Washington, PA and Ewing, NJ.

That rapid, almost viral spread of the Korean barbecue concept caused Technomic, a Chicago-based marketing research and management-consulting firm, to name Korean foods (including Korean barbecue and Korean-style tacos) as one of the five leading menu trends for 2010.

There's even a Facebook page dedicated to the charred, succulent beef with more than 1,700 fans.

“Korean barbecue uses raw products, cooked simply, in stages,” says Christian Basset, head chef at Saint Joseph's College in Standish, ME. “The end result has a depth of really vibrant flavors that pop in your mouth.”

“Our students really enjoy the Korean barbecued beef. And their parents like the fact that we've introduced a new type cuisine on our menu,” says Jennifer LeBarre, director of nutrition services at Oakland (CA) Unified School District.

Cal Dining at UC Berkeley serves up Korean barbecue in a bar format alongside kimchi, lettuce or other leafy greens, various salsa and a short grain sticky rice. The short ribs, known as kalbi, are cooked in small batches and constantly refreshed to ensure that the tantalizing aromas are always present.

Cal Dining has since expanded its Korean repertoire to also include bibimbap, a bowl of hot rice topped with a variety of vegetables (cooked and raw) as well as a fried egg.

“We can't serve fried eggs from the bar so we put out scrambled eggs instead,” explains Shen. “It actually works really well and we've gotten a lot of great feedback from students.

“Korean barbecue isn't new,” she continues. “The concept is simple and straightforward and that's why it works. You don't need special equipment; you can use the tools you have on hand. The food cost is low and it's pretty healthy, too.”

Kogi Korean BBQ-To-Go made its mark alerting customers to its truck's whereabouts via Twitter.

A similar social media splash was made when the Korean Student Association at The University of Texas at Austin created a Facebook event around an upcoming Korean themed menu at Jester City Limits, which regularly features a monthly International Night at its Wok Across Texas venue.

“Some of the students from our Korean Student Association attended one of our monthly food service committee meetings where we announced the menu was coming,” says Scott Meyer, associate director, food services. “They took it upon themselves to create the Facebook event and invite everyone they could.”

The news spread like wildfire. “We had a line of customers before the event even started and we had a steady stream of hungry students waiting right up until closing time,” says Meyer.

“Marinating overnight ensures that the acids will begin to break down the meat,” says Meyer. “The day of the event, everything is cooked in small batches to guarantee freshness.”

Coming In Off the Street

Although nearly any savory dish can — and has — been used as filling for a taco, few can resist the sensory pleasures of the Korean version with its perplexing combination of textures and temperatures and spicy, salty flavors.

“As we were looking at various street foods to incorporate into our existing concepts, Korean barbecue, especially the tacos, fit perfectly,” says Weaver.

“Barbecue generally shares the basic characteristics,” says Hall. “The difference between a Korean barbecue and an American barbecue is the authentic Asian ingredients such as the sesame oil, fresh ginger, and soy sauce as opposed to the traditional American counterparts such as ketchup, brown sugar, and vinegar. These different ingredients create a completely different flavor profile.”

A profile students seem to love. “The Korean tacos are one of our most popular items served on our specialty bar,” says Weaver.

In September, Lackmann Culinary Services featured bulgogi as part of its yearlong street food series at its B&I and college accounts. Kelly Heefner, a regional executive chef at Lackmann's Morgan Stanley account in New York, not only helped to develop the recipes used for the special, but he also helped chefs ensure the flavors, textures and dishes were spot on.

“When we were developing the different types of cuisine for this series, we looked at things like prep, cost, authenticity and portability,” he says. “Bulgogi tacos are easy to prepare, the ingredients are inexpensive, and you don't need any special equipment.”

For units that didn't have a grill, Heefner simply had the chef sauté the meat. If certain ingredients weren't available, different panchan was made. “Korean barbecue is quite flexible making it perfect for the noncommercial segment.”

“Korean barbecue goes very well with all other ethnic cuisines, too,” he says. “Once you understand the balance of sweet and savory flavors, its really very easy to have it interplay with other styles of food. We fuse Korean barbecue with Mexican and American cuisines. We'll serve it in a burrito or as a steak salad or grilled steak sandwich. It can also be fused very well with Italian pastas.”

“We try to use lots of local ingredients in our Korean barbecue dishes,” says Saint Joe's Head Chef, Christian Basset. “Granted, it's a bit of an oxymoron in concept, but the taste of those grass-fed, Maine-raised short ribs that have been marinated for days in our homemade sauce is truly unbeatable.”

There are three main dishes in Korean cuisine most are familiar with. The first is Kimchi (or kimchee), a spicy fermented cabbage or radish that people seem to either love or hate. The second and third are the Korean barbecued beef dishes bulgogi and kalbi (or galbi).

Bulgogi, which literally translates to “fire meat,” is made from paper thin slices of prime cuts of beef while kalbi is made from beef short ribs. Traditionally, both meats are marinated with soy sauce, garlic, sesame oil, green onions and sugar then grilled over a medium-hot flame and served wrapped inside a fresh leaf of lettuce with a finger of steaming rice, a dollop of spicy red bean paste (gochichang), a few slivers of garlic, and shredded strips of fresh green onion.

Both meats can also be served as a main dish over a bowl of hot steamy rice or as a component in other Korean dishes such as japchae, lettuce wraps, panchan (an assortment of Korean side dishes), bibimbap, and kimbap to name a few.