New Name, Brand and Positioning for the Organization A new slate of directors and a focus on hospitality service management Annual Awards including Lifetime Achievement, Bob Pacifico Award and President&#39;s awards Video links to Conference highlights 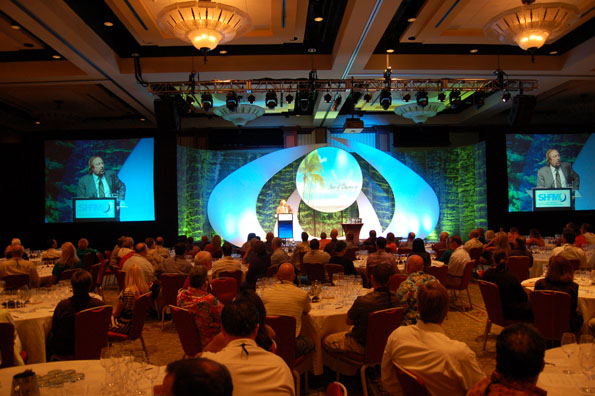 At one point early in the Society for Foodservice Management's (SFM) 2013 Annual Conference in Bonita Springs, FL, the venerable group officially added an “H” to its name and became SHFM—the Society for Hospitality & Foodservice Management. It was a long-planned strategic move designed to emphasize the organization's expanded mission to to postion the association as a major support group for those with the larger workplace hospitality responsibilities many of its members now have.

The moment was marked by a formal countdown (see video here) led by outgoing president Mark Freeman and enthusiastically seconded by the gathering of nearly 400 Society members.

The same theme was taken up a day later at the conference-closing President’s Banquet, where incoming president Sabrina Capannola made the organization’s new name the theme of her acceptance speech. “It’s the year of the H,” she said. “It’s more than just a Hugely Historic Happening that I’m Happy and Humble to Help Harken,” she joked. “Did you notice how many H’s I put in that sentence? We’ll, that’s no accident because this year is all about the H. We have to embrace the H, we have to live the H, we have to ask, ‘What the H can I do to spread the word?’”

In between, SHFM members enjoyed presentations by a roster of notable speakers, chose a new board of directors and took advantage of the resort setting and the many opportunities afforded by the conference schedule to network.

The Annual Conference also served as the venue for presentation of SHFM’s 2013 Director’s Awards, which had previously been announced.

The highlight of the award ceremonies was the presentation of the Lifetime Achievement Award to Ron Ehrhardt, vice president of operational safety for Compass Group. He was introduced by longtime friend Rick Post, Compass Group’s CEO of contract foodservice, who reminisced about their relationship and the many services Ehrhardt had provided to SFM over the years. These included his very successful term as association president in 2003-04 when he oversaw the group’s 25th anniversary celebration at SFM’s 2004 Annual Conference in Baltimore. (View video of Post's remarks here)

“Not only am I honored [to make this presentation] but I wouldn’t have missed it for the world,” Post said. “If I had a chance to go to the Super Bowl, or be here to give this award, I’d be here.”

“I couldn’t be more happy tonight than to be with all of you,” Ehrhardt said in his acceptance speech. “I’m deeply humbled, very honored. As I think back about all the very good things that have happened to me in my career, all the meaningful things, they happened because of someone in this room, some member of SHFM, who was here to guide me, to help me, to lead me…and to tolerate me sometimes.”

Among the awards not announced beforehand, the Bob Pacifico Award, presented for dedicated service to the society and to the corporate services community, went to Barbara Kane of Ecolab, the only associate member of the group ever to also serve as its president (2011-12). She was introduced by last year’s Pacifico Award winner, Mike Johnston of Tyson Food Service, and welcomed to the stage by a gathering of other previous winners of the award.

As one of his last acts as SHFM president, Freeman chose to honor Steve Follett of Follett Corp. with the President’s Award, which is presented at his discretion by the outgoing SHFM president to an individual who had been of greatest help to him in preparing for and fulfilling the responsibilities of his office.

For the first time, the 2013 Annual Conference also featured a Liaison & Self-Operator Day on the first day of the conference to provide members in those categories with content specifically tailored to their interests and priorities. Presentation topics included sessions on conference services and on audio visual services.

Perhaps the highlight of the social and networking activities built into the 2013 Annual Conference schedule was A Taste of the Tropics, a Floridian BBQ extravaganza designed by Florida-based celebrity chef Michelle Bernstein and dished out by chefs representing various companies in the SHFM membership. Held on a terrace outside the Bonita Springs Hyatt Resort & Spa, it was designed to allow guests to graze from the various serving tables, each offering a different dish.

Among the general sessions were presentations by motivational speaker Ty Bennett, sustainable fishing advocate Rick Moonen, wine expert Kevin Zraly and celebrity chef Susan Feninger. Zraly’s wine tasting event was an especial highlight enjoyed by the attendees, with each participant getting to sample and learn about six different varieties of wine.