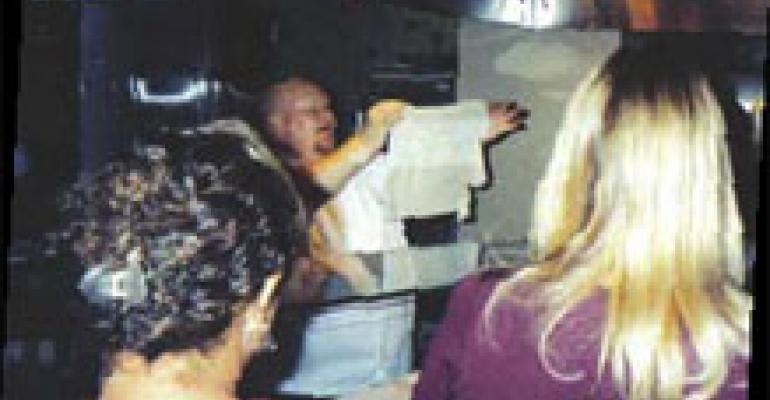 Whipping up an all-butter pie dough, correctly, can be tricky. Especially if you have no idea what pea sized granules are. Enter Bill Doyle. As catering manager at Stryker Café in Mahwah, NJ, for Whitsons Corporate Dining, the corporate dining division of Whitsons Culinary Group, Doyle and his team have developed a unique baking demo program that fosters community while teaching customers a thing or two about baking basics.

Once a month, as time allows, employees learn to slice, spice and bake like a pro from their very own onsite Certified Executive Chef.

“The demos are entertaining, educational and provide additional value to our customers at Stryker,” says Doyle. “We try to gear the demos to the as yet un-culinarily initiated. We’re teaching them baking procedures that they can do on their own.”

Helping customers seek out their inner bakers—whether they aspire to make crunchy espresso scones or a simple apple cranberry crisp—often requires more guidance than a cookbook or recipe alone can provide, explains Doyle.

“During the demos, I try to give insider tips—like keeping a wet towel over phyllo dough—so that when they try to replicate the recipes at home, they start with more knowledge than just the basic recipe.”

Insider Tips
In October, Doyle is planning a seasonally autumnal demo. “I may do a pear tart. In keeping with the mindset of teaching procedures, I’ll show how to make the dough, roll it out, peel the pears, slice the pears, and cut out and fill the tart. I’ll offer samples to show what the end product looks and tastes like.”

Some insider tips he plans to share for pear tartes? “Try one of those rotary apple peeling gizmos you see in housewares and hardware/country- type stores! They’re amazingly easy to use and peel/core/slice an apple/pear in seconds. Also, use heated apple jelly thinned with a touch of brandy to glaze the top of the tart after cooling. It’ll hold longer if sealed that way.”

The underlying theme for each demo is ease and practicality. Doyle finds that by offering variation tips, customers are more apt to try the recipes on their own. When he demonstrated how to make ruggalach— bite sized crescent-shaped cookies that can have any of several fillings including raisins and nuts, poppy-seed paste or jam and generally made with rich cream cheese dough—he suggested using a Boursin cheese for the filling.

“Variations allow customers to put their stamp on the baked goods,” he adds. “It also lets them think outside the baking box.” When Doyle demonstrated his selfproclaimed ‘ultimate soda bread’ (Recipe below) he suggested to one customer that, instead of putting it in a traditional loaf pan, she should pat it into a disc and cut it into scones.

“The woman came back the next week and said to me, ‘Bill, I hate you! I have to make your soda bread every week now because it’s the only way I can get my husband to eat bread!’ For me, that was a satisfying mark of success.”

Getting Started, Moving Forward
The baking demo program began about two years ago when General Manager Greg Godfroy and Chefs James Parker and Bill Doyle were approached by several customers asking for recipes of favorite menu items served in the café. Receiving these requests quite often, Godfroy, Parker and Doyle decided, “Why not teach our customers how to make the recipes via Whitsons-hosted cooking demonstrations?”

After discussing the idea amongst themselves, they took it to their client and received an immediate and enthusiastic go ahead.

“From the beginning, the response to our cooking demos has been overwhelming, sometimes reaching 75 attendees,” says Doyle. “We filled a niche need and were able to build a baking community on campus.” Each month, Whitson’s hosts the demo in the afternoon, usually around 3pm, advertising it in advance on the café section of Stryker’s website as well as with email blasts to high profile employees. According to Doyle, the turnout heavily depends on the marketing.

“As catering manager, I personally e-invite many of my catering clients who book events with me more frequently. That way, I’m better able to establish a working relationship with them,” says Doyle. “I also e-invite the department heads, the movers and shakers and the people who make sure our contract stays in our hands.”

These demos, after all, are yet another opportunity to showcase Whitsons’ onsite culinary talent. Doyle and his team choose recipes that are seasonally appropriate, easy to make and, sometimes, a continuation of the previous month’s demo.

Past demos have included: Fresh Lemon Curd, Homemade Pie Dough, Blueberry Buckle, Cheesecake and Apple Strudel. The demos usually last between 15 and 30 minutes. A copy of the recipe is provided, as well as samples for everyone to try.

“It’s important to always over-prepare by a margin of 15%,” say Doyle. “Once you’ve run the demos a few times, you find, there are always a few hungry scavengers who come down only for the free samples at the very end. So it’s always better to have too much than not enough.”