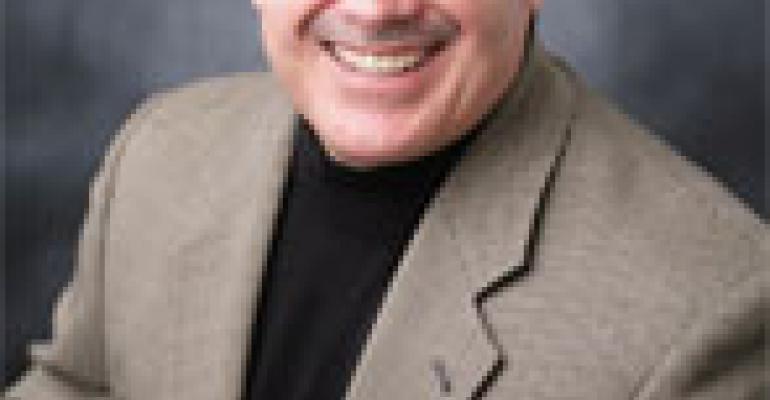 Tony Almeida will forever be known for being among the first directors of a large hospital foodservice program to implement full-scale room service. Even today, more than six years after taking that step, Robert Wood Johnson University Hospital (RWJ) remains a benchmark model and a must-see site for many other directors and administrators thinking of taking the room service plunge.

That achievement alone would be enough to earn Almeida serious consideration for a Silver Plate. But his career has demonstrated excellence on many best practice fronts. On the retail side, for example, he's taken RWJ's sales from around $650,000 when he first joined the organization as assistant director in 1988, to more than $4 million today.

Winning the 2010 Silver Plate Award in the Healthcare category is simply a well-earned recognition of these and other achievements (for more on Almeida and the RWJ foodservice program, see the cover story in the August 2004 FM)

Almeida has spent the bulk of his career in hospital foodservice, going from serving as a potwasher at Elizabeth (NJ) General Medical Center while still in high school to getting his degree in foodservice management and joining RWJ at a time when the foodservice operation was contract managed (to ServiceMaster).

He played a key role in the transition shortly thereafter to self-operated status, and was named director of the department in 1992. A couple of years later, he took on responsibility for environmental services as well, a department that today employees 200 FTEs in addition to the 155 Almeida oversees in dining and nutrition services.

In 2002, he opened a new, state of the art retail cafeteria called the Dining Room that bristled with self-branded, commercial-style food stations offering everything from deli sandwiches and grilled items to gourmet salads and ethnic specialties. It replaced an antiquated cafeteria tucked away in a basement space with a spacious, colorful 16,000-sq.ft. cafe flooded with natural light from windows overlooking the main entrance.

A concurrent opening in RWJ's Children's Hospital of the Safari Cafe was similarly dramatic — and successful. That new cafe grew revenues from around $20,000 to $210,000 last year.

The 2003 conversion to room service dining is undoubtedly Almeida's signature accomplishment. He had previously received the go-ahead for a major three-phase $3.5 million renovation of his 1950s-vintage kitchen and was in the middle of phase two when administration asked him to consider room service dining.

At the time, room service was confined primarily to smaller hospitals, and to limited use (such as in maternity wards) in a select few larger institutions. Almeida knew that if he was going to do it, he wanted RWJ's service to be “full-house” (that is, hospital wide).

The conversion was helped by administrative support and Almeida's comfort level with new technology. By 2003, RWJ already had a decade of experience with automating dining operations. It was one of the first to implement spoken menus using hand-held order input devices, way back in 1993.

The conversion produced a dramatic leap in patient satisfaction, from under 50 percent to over 90 (96 in the latest survey) on the Press Ganey scale measuring satisfaction with food quality.